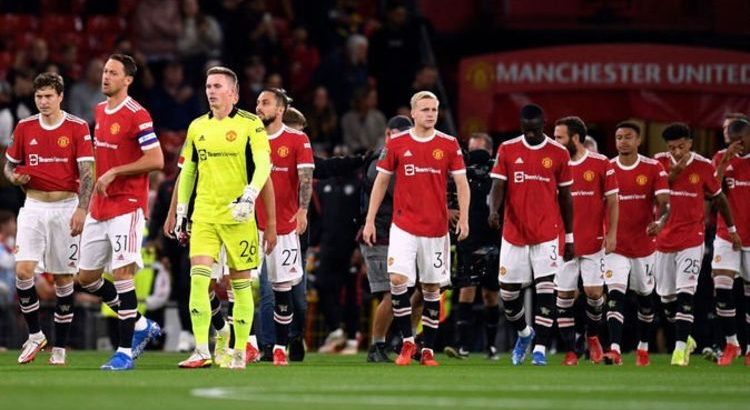 United slumped to a demoralising 1-0 defeat to West Ham on Wednesday, as hopes of a run into the latter stages of the Carabao Cup went up in smoke at Old Trafford.

Solskjaer’s side conceded early to Manuel Lanzini and were unable to respond throughout the 90 minutes, racking up 27 attempts in total, but managing just six on target and failing to equalise.

Both teams made a string of changes for the match following their meeting in the Premier League just four days earlier, with Hammers forward Jarrod Bowen the only player to start both matches on either side.

But Solskjaer will now be considering making a full 11 changes again for the weekend’s game against Villa.

And the five attacking players who started on Wednesday – Anthony Martial, Jadon Sancho, Jesse Lingard, Donny van de Beek and Juan Mata – must be cut after a toothless and thoroughly disappointing display.

“It was a slow start again and that needs addressing,” Solskjaer said after the Carabao Cup loss.

“They got a goal and after that we played well for long periods, gave it a go and stats don’t mean anything. When you have 27 shots the boys have given it a go.

“We built pressure, Mason Greenwood came on and had a good one but sometimes the pressure does not come to anything.

“He made a positive impact, he was fresh and sharp but it was too little too late. The last six or seven minutes we were going gung-ho and they could have scored a couple.”

It was another disappointing display from summer signing Jadon Sancho, who has struggled to hit the ground running at United and is likely to be back on the Old Trafford bench for the visit of Villa on Saturday.

“Sancho will improve, I’m sure,” Solskjaer had said between the two games against the Hammers.

Wednesday’s match was also a second start of the season for midfielder Van de Beek, who also started the Champions League defeat to Young Boys.

But the Netherlands international put in a sub-standard performance and came in for some criticism for his role in West Ham’s goal.

“He’s got drawn to the ball, he’s had his eyes on the ball and he’s not checked his shoulder,” former United women’s manager Casey Stoney told Sky Sports.

“There is only one ball being played from the byline and that is the cutback. That is the danger. You have got to stay on your player and make sure you are in a position to defend it.”

Mata and Lingard should both return to the bench against Villa after poor performances, while Martial’s opportunities at Old Trafford are fast running out.

The Frenchman has been heavily linked with a January move away from Manchester, with Tottenham Hotspur among the clubs interested.

And BBC Sport pundit Dion Dublin was not impressed with Martial’s performance against the Hammers.

“We need to see more from Anthony Martial, we have said it many times before but he is not helping his cause,” Dublin said.

“I want to see him sweating and putting the ball in the back of the net,” the pundit continued.

“He has not done enough since being at United, you see flashes and think it is the start then he doesn’t do anything.

“His body language is horrible to watch, he doesn’t want to run around and work hard to be Manchester United’s number nine.”

All five players are likely to drop out, and will not be the only ones, as United seek to get back to winning ways in the league this weekend.