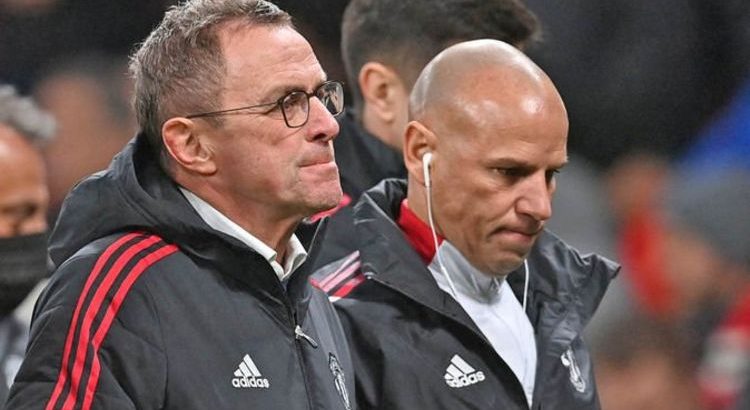 Manchester United players already have a problem with Chris Armas following his appointment, according to reports. The American recently moved to Old Trafford to work as Ralf Rangnick’s assistant. However, those within the squad are currently unconvinced of his credentials as they go through yet another turbulent period.

Manchester United’s coaching staff has changed in recent weeks, ever since the sacking of Ole Gunnar Solskjaer.

Michael Carrick had been expected to stay, especially when he was placed in charge on an interim basis in the immediate aftermath of his former team-mate’s departure.

Yet Carrick left to spend more time with his family, having been at United ever since arriving as a player back in the summer transfer window of 2006.

Kieran McKenna has also since left United, while goalkeeping coach Richard Hartis was another casualty of the Solskjaer sacking.

Rangnick recently brought Armas with him to the club, having been impressed by the 49-year-old’s work in America.

Yet The Athletic say players, so far, haven’t been impressed by the former New York Red Bulls and Toronto FC boss.

It’s claimed those within the dressing room are ‘yet to be convinced of his pedigree’, with Armas learning his trade in the MLS.

The American leads training at Carrington and has put on drills to win back the ball.

Yet United squad members are said to feel they need more direction on what do when they’re actually in possession of the ball.

Armas has also put an ‘early focus’ on improving the club’s defence.

However, there is an expectation Rangnick will conduct ‘detailed attacking work’ later in the week.

This news is the latest to emerge about United, who are currently going through yet another turbulent period in their recent history.

When Rangnick was hired, the Glazers and John Murtough both hoped he’d make an immediate impact in English football.

But with the club winning just three of their six matches under the 63-year-old, things aren’t working out.

To make matters even worse, many players are keen to leave the club behind – either in January or in the summer.

Donny van de Beek has grown fed up of his lack of minutes, with the Netherlands international making just four Premier League starts since touching down from Ajax.

Jesse Lingard is ‘equally dissatisfied at his amount of game time’ and is expected to leave on a free transfer.

Anthony Martial has also fallen down the pecking order amid interest from Sevilla, Newcastle and Barcelona.

And with Eric Bailly failing to get many chances, the Ivory Coast international is also eyeing a move away.

“The first thing Jesse Marsch told me about bringing Chris in was that the guy’s a winner,” he said.

“(Chris) has an infectious positivity about him that’s just going to permeate throughout the club — and you know, Jesse wasn’t wrong.

“Chris’ role evolved throughout my time there as captain but, first and foremost, he was just a fantastic conduit between the players and the head coach.

“When Jesse and Chris came to Red Bull, they appreciated the nature and opinion of the players that had been at Red Bull for a while, and they wanted to incorporate our veteran corps’ opinions or feelings on basically everything that we did.

“That was one thing that Chris was really good at: Being that guy who could put his arm around you and get your honest opinion about what we were doing and what we were trying to accomplish.”

United are next in action against Aston Villa on Monday (7.55pm).