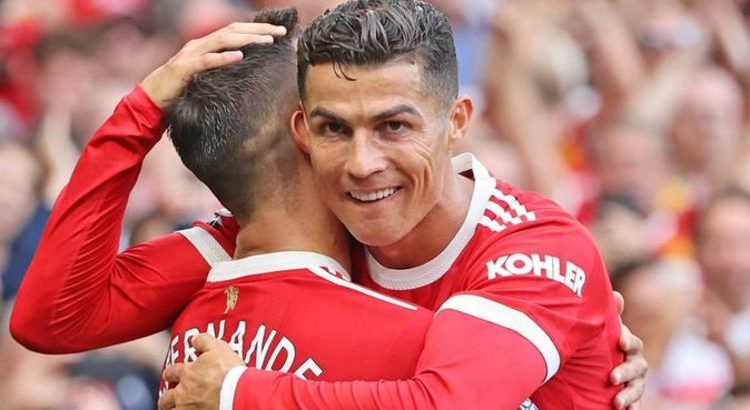 Details of Manchester United players’ WhatsApp messages over Cristiano Ronaldo have surfaced in the wake of his brace against Newcastle on Saturday. The Portugal international made his second debut for the Red Devils. And he didn’t disappoint, shining as they secured a 4-1 victory.

Ronaldo put United ahead just before half time, tapping in from close range after Mason Greenwood’s shot had been spilled into his path.

But Ronaldo wasn’t to be denied the spotlight and rose to the occasion to notch his second of the afternoon in the 62nd minute, putting the ball through the legs of Freddie Lookman in the process.

Bruno Fernandes and Jesse Lingard then notched to ensure they secure a crucial win that sees them sit top of the Premier League table.

However, Ronaldo was without question the star of the show.

And The Athletic have explained WhatsApp messages that were sent prior to his arrival, with players just as excited as their supporters.

It’s claimed that, normally, their group chat contains ‘the most professional of posts’.

But that all went out of the window when it was announced Ronaldo would be returning to the club, having previously looked likely to join Manchester City.

It’s stated by the publication that the chat was ‘pinging’ with speculative messages of excitement.

And despite entering the twilight years of his career, Ronaldo doesn’t appear to be showing any signs of slowing down.

It was a day of celebration for the Red Devils, who have now picked up 10 points from a possible 12.

That’s in stark contrast to last year, where early defeats to Crystal Palace and Tottenham installed a doom and gloom mood around the place.

Celebrities turned out for the day, too.

Gary Oldman and Declan Donnelly were there, as well as Olly Murs, Stormzy and Nigerian singer Burna Boy.

Sir Alex Ferguson was spotted enjoying himself in the crowd, while Avram Glazer made a rare appearance at Old Trafford to mark the occasion.

Speaking after his heroics, Ronaldo himself admitted he was ‘super nervous’ before the match.

“I was really nervous, maybe I did not show it,” he said.

The reception was incredible.

“I was thinking last night that I wanted to show I’m still capable of helping the team.

“When I started the game, I was super nervous when they were singing my name but this crowd is unbelievable.

“But… we have to build up confidence. The team needs to be mature if it wants to win the Premier League and Champions League.

Next up for United is FC Young Boys in the Champions League on Tuesday.

Ronaldo could be involved, with the 36-year-old previously winning the competition with the club back in 2008.