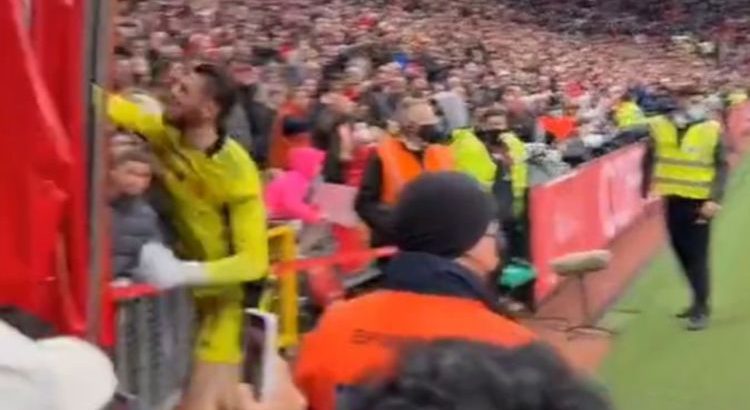 Manchester United goalkeeper David De Gea was spotted punching the Old Trafford tunnel in a fit of rage during their humbling defeat at the hands of Manchester City on Saturday. The Spaniard was at fault for the second goal they conceded, putting the Red Devils 2-0 down at the break.

City were already 1-0 up within the first ten minutes when Eric Bailly prompted a collective groan from around Old Trafford by putting into his own net.

The United faithful may have hoped to go into half time 1-0 down after weathering the storm, but the visitors then struck again moments before the break.

A deep cross was carelessly left by Luke Shaw and Harry Maguire for Bernardo Silva to poke in at the far post, although De Gea should have done better.

That turned out to be the last decisive action of the match, although Pep Guardiola’s side were in cruise control throughout the second half.

Fans watched on astounded, although the whole game took place amid a tense atmosphere as City rarely looked like relinquishing control.

De Gea was actually instrumental during the first 45 minutes, pulling off a string of impressive saves to keep the Red Devils within touching distance of their local rivals.

Manager Ole Gunnar Solskjaer is now set to face even more pressure after another disappointing result, with Liverpool’s 5-0 thrashing from two weeks ago still living fresh in the memory.

With the international break now upon them, the United board have a big decision to make regarding the future direction of the club.

The likes of Zinedine Zidane and Antonio Conte had been linked with the Old Trafford hotseat in recent weeks, but with the latter now in charge of Tottenham, the club’s next move is anyone’s guess.

As of now, Solskjaer has time to reflect on another damaging loss which illustrated just how far off the pace they are when it comes to the Premier League’s current big hitters.

“At the moment we are [far off the top teams], we need to get back to where we were at the end of last season,” admitted the 48-year-old after the final whistle.

“I’m sure when we come back the players will be fresh and the demands will be high but we need to get back to what we were for a while and we have the players to do that.

“We’ve been through this a few times and since the last home game it’s been a very difficult period.

“Systems or style we need to be on the front foot more. I can’t look at myself and say this is how I want United to be.

“I have good communication with the club. I want the best for United and as long as I’m here I want to do everything I can to improve this.”