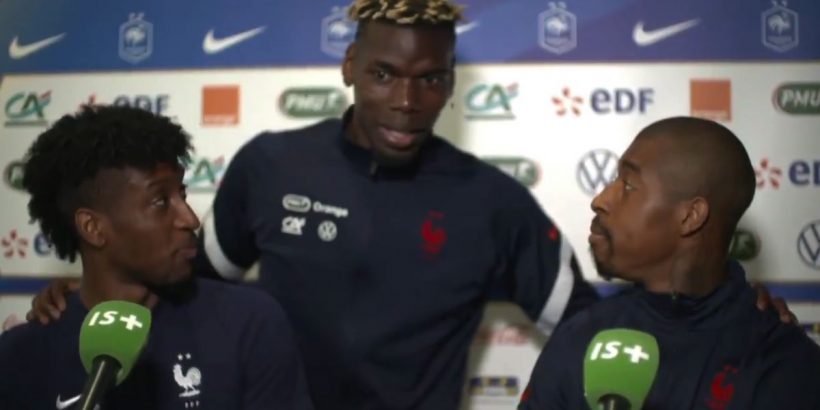 Paul Pogba made a sharp exit when quizzed by his France team-mates about a potential switch from Manchester United to Paris Saint-Germain.

Pogba's future is uncertain, with his Old Trafford contract set to expire at the end of next season.

The midfielder has been repeatedly linked with interest from Real Madrid and his former club Juventus over the past couple of seasons.

And with PSG one of the few clubs who could afford his wages, a move to the city where he grew up has also been touted as a possibility.

Pogba has previously ruled out joining the Ligue 1 side, as both his parents are fans of their rivals Marseille.

But that didn't stop his pals Kingsley Coman and Presnel Kimpembe teasing him about a move to Paris as France prepared for the Euro 2020 finals.

During a press conference, Pogba surprised his team-mates as he emerged from behind a desk.

But he soon regretted creeping up on them when asked if he'd had any contact from PSG's president Nasser Al-Khelaifi.

Kimpembe said to Pogba, "We're talking about Paris", with Coman adding: "Yeah, you're Parisian aren't you?"

Should Manchester United sell Paul Pogba this summer? Have your say in the comments below

Coman then asked, "Nasser, any contact?", as Kimpembe said: "The transfer window is soon."

Asked again whether Al-Khelaifi had been in touch, Pogba quickly replied "No" before making a beeline for the exit, leaving his team-mates in hysterics.

Pogba's agent Mino Raiola claimed earlier in the season that it would be better for all concerned if United's £89million record signing found a new club.

"I can say that it's over for Paul Pogba at Manchester United,' Raiola told Italian newspaper Tuttosport in December.

"He has to change teams, he has to change the air. He has a contract that will expire in a year and a half, in the summer of 2022, but I believe the best solution for the parties is to sell in the next market.

"Otherwise, the club, with whom relations are excellent, knows well that they would risk losing him on a free transfer, given that for the moment it is not the player's intention to extend the contract."

Since those comments, United boss Ole Gunnar Solskjaer has made Pogba an integral part of his team, finding a new role for the 28-year-old on the left flank – and the club have not given up hope of persuading Pogba to extend his contract.