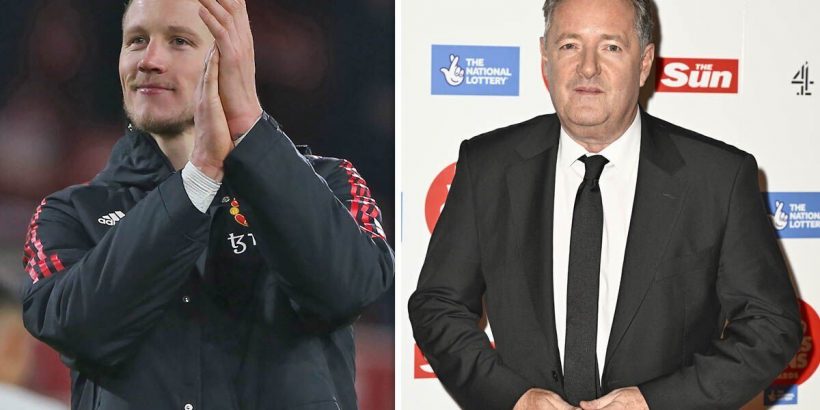 After Manchester United lost to Arsenal on Sunday, Piers Morgan decided to aim a dig at Wout Weghorst. He labelled the Netherlands international a player who sounds like an ‘Austrian sausage’ after an admittedly disappointing display at the Emirates Stadium. However, his goal and overall performance against Nottingham Forest on Wednesday showed a player who is ready to step up for Erik ten Hag the season.

Morgan has been a huge Ronaldo fanboy for some time, now.

And the 57-year-old has been regularly sniping at United ever since they decided to cut the Portugal international loose back in November following a bombshell interview that month.

And after seeing his beloved Arsenal beat United by the narrowest of margins on Sunday, Morgan then decided to go for Weghorst.

“That’s what happens when you hire an arrogant coach who disrespects the [GOAT] @Cristiano⁩ so badly he leaves – and then replaces him with someone I’ve never heard of who sounds like an Austrian sausage.”

Weghorst did underwhelm as United lost to Arsenal, with the Netherlands international a static figure at the tip of their attack.

But the forward has now shown Morgan, and the rest of the world, exactly what he’s capable of.

This was the 30-year-old at his best on Wednesday night, with the forward producing his finest display since his arrival from Burnley on loan.

Weghorst’s link-up player was a joy to behold, with the forward regularly bringing the likes of Marcus Rashford, Bruno Fernandes and Antony into play.

And the Netherlands international got his first goal for the Red Devils as well, prodding home from close range after Antony’s shot was saved.

Sure, one goal won’t be enough to silence his critics. He’ll need to do more, something he’s fully aware of.

But that Weghorst has already opened his account sooner than Mykhailo Mudryk, Joao Felix and Cody Gakpo bodes well for what is to come.

Morgan is blinded by his friendship with Ronaldo. Weghorst is a better presser and has now bagged a third of the veteran’s tally for the current campaign after just three matches at the club.

Speaking after the game against Forest, the Dutchman expressed his delight with the result.

“It’s a great result, a great first win in the first match, but of course now it’s a big opportunity to go to the final,” he said.

“There’s one match to go. If we play like we did in the second half where we twere more calm on the ball, with more easy play, and just controlled the game, then I don’t see any reason to get in trouble next week.

“But of course, it’s a match and you saw in the first half, we have to deliver and do things well otherwise you can get in trouble. We were lucky with the 1-1 [Forest’s equaliser] that was cancelled.

And, on opening his account for the club, he added: “As a striker, you want to score these goals and also this first one.

“Hopefully, many [more] to come.

“It was a good attack over the right side. It was Casemiro, I think. who played it to Antony and he shot well.

“When I saw the high bouncing ball, I just went straight for the rebound and it came exactly like I hoped in front of my feet, and I could finish it.

“You’re happy and of course you wanted it [his first goal], so that’s a good thing. I’m happy to help the team in this way because I also think it was an important moment shortly before half-time.

“It gave us a way better feeling because, to be honest, the first half was not how we wanted it. I think it was also a good moment.”