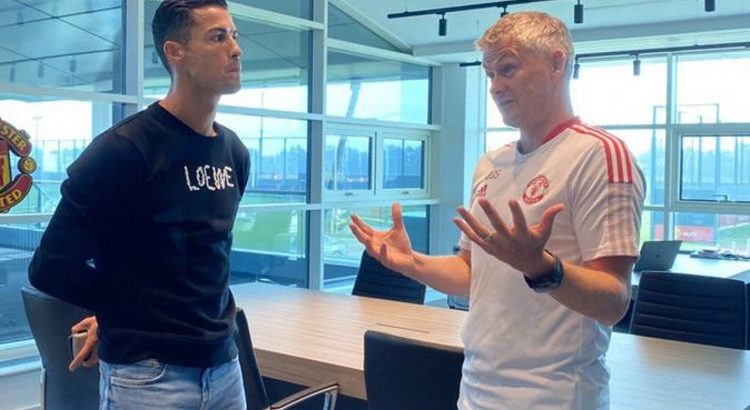 Manchester United are set to start Cristiano Ronaldo against Newcastle after he wowed Ole Gunnar Solskjaer in training, reports say. The Portugal international recently returned to the club from Juventus. And he’ll be looking to put Steve Bruce’s side to the sword as the Red Devils look to continue their unbeaten start to the new Premier League campaign.

Manchester United announced on deadline day that Ronaldo had returned from Juventus, with the forward previously looking set to join Manchester City.

And, after impressing in training, The Sun say the 36-year-old is now set to start up top today.

With Edinson Cavani absent from the squad, Solskjaer is ready to deploy the forward in the No 9 role as they look to put Newcastle to the sword.

It will be Ronaldo’s first appearance for the club since the 2009 Champions League final, where they lost 2-0 to Barcelona in Rome.

And Solskjaer feels the forward will be better than ever, despite him entering the twilight years of this career.

“He has evolved as a player. I don’t think you’ll see those 18,19, 20 step-overs before he goes past you but he still has them, the step-over, shift and shoot.

“He has developed into one of the most accurate finishers I have seen.

“What he developed in his years at Real Madrid has impressed us all.

“He is one of the best of course in the air, his timing and desire to get on the end of crosses is second to non.

“He still hits the target 99 times out of 100 when he shoots from outside the box as well.

“He knows the game more, definitely, he knows which positions to drop into and when to run in behind and he is still as quick it looks like from the stats.

“He’s in such good nick still and will be looking in the next few years to play and score as many goals as he can.

“We don’t have his skill set in the team, the mix, no one has really. He is one of the best players that’s ever played the game.”

Solskjaer was previously coy over whether Ronaldo would get the nod up top.

“He’s had a good pre-season with Juventus, played with his national team and had a good week with us.

“He’ll definitely be on the pitch at some point, that’s for sure.”

Ronaldo himself, meanwhile, has promised he’s ‘not here for a vacation’.

“This is why I am here. I am not here for a vacation,” he told MUTV.

“As I told you, before was good, winning important things and I wore the shirt before many years ago, but I am here to win again.

“I am ready and I think I will be a huge thing in the next three or four years.”