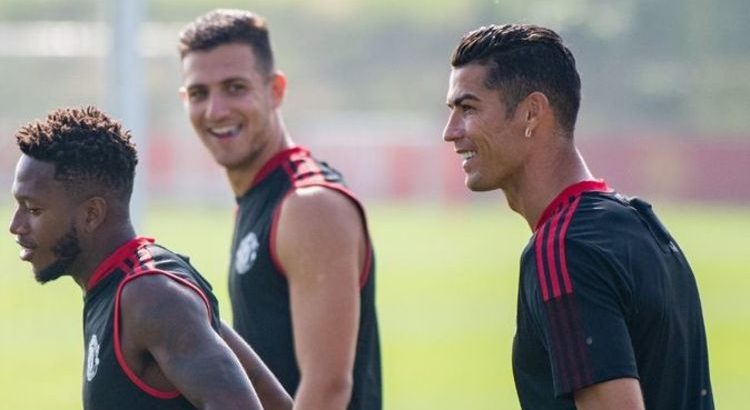 Ole Gunnar Solskjaer has already confirmed Cristiano Ronaldo will play some part in Manchester United’s Premier League clash with Newcastle this afternoon. The Norwegian was coy when quizzed on whether CR7 may start the game but he admitted Ronaldo will feature at some point and Express Sport are backing him to start.

Ronaldo arrived back at Carrington on Tuesday meaning he has had nearly a full week of training to prepare for his Old Trafford return.

Although there has been no confirmation of an injury or absence, Edinson Cavani has not been pictured in training since Monday.

Fans are therefore fearful he may not be available for the match and with Ronaldo raring to go, all signs point towards him starting the contest.

Solskjaer has given nothing away as of yet though, and he said on Friday: “He’s been having a good pre-season with Juventus, he’s played for the national team, he’s had a good week with us here.

JUST IN: Manchester United can kill two birds with one stone with £54m Nemanja Matic replacement

“He’ll definitely be on the pitch at some point, that’s for sure. He’s been good [in training]. Of course, we’ve followed his career from afar since he left here and everyone’s very happy to have him back.

“He can speak for himself, but it seems like he’s happy to be back as well. The mood has been very good, he’s worked well and we’re looking forward to Saturday of course.”

David de Gea will keep his place after a brilliant performance against Wolves saw him earn a clean sheet at Molineux.

United are expected to be unchanged at the back with Aaron Wan-Bissaka and Luke Shaw at full-back and Raphael Varane partnering Harry Maguire at centre-back.

In midfield, the match comes too soon for Scott McTominay, who has only just resumed training following minor groin surgery.

Fred is also expected to sit the game out after FIFA issued eight Brazilian Premier League internationals with a five-day ban for failing to report for national team duty during the break.

Paul Pogba could be dropped back into a deeper midfield role alongside Nemanja Matic although Donny van de Beek will still be quietly hopeful of minutes.

In attack, Jadon Sancho could keep his place with Mason Greenwood on the other flank.

Bruno Fernandes will of course operate as the No 10 with Ronaldo expected to lead the line, as he looks to mark his return with a goal.

Marcus Rashford is not expected to return to full fitness until October after undergoing shoulder surgery back in August.

Anthony Martial will also feel like he has a point to prove now Ronaldo is back in the building but he could find himself on the bench.