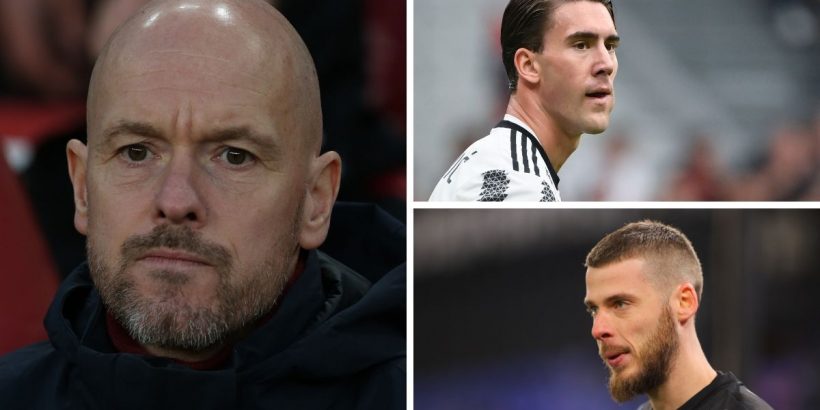 Manchester United boss Erik ten Hag still appears to be scanning the market for potential new signings with just eight days left until the end of the January transfer window. The Red Devils have already moved to improve their ranks with the temporary addition of Dutch forward Wout Weghorst, who joined on loan from Burnley earlier this month.

It seems as though another forward could soon be joining Weghorst at Old Trafford if Ten Hag gets his way, with several high-profile names having been linked with United over the last few days. Randal Kolo Muani is among those to have been mentioned in connection with a move and could reportedly be snapped up for a transfer fee of around £53million between now and the end of the January window.

Juventus marksman Dusan Vlahovic is another player said to be on United’s radar, with Juventus reportedly looking to offload the 22-year-old after being hit with a points deduction following an investigation into their previous transfer dealings. However, it remains to be seen whether Ten Hag will be able to welcome any more new faces to United this month, with plenty of work still to be done to bring either player to the club.

Erik ten Hag will have a ‘big chance’ of bringing £53m-rated target Randal Kolo Muani to Old Trafford before the end of this month, according to transfer expert Christian Falk.

He told GiveMeSport: “They’re really fighting to keep him one year longer at Frankfurt, so it will depend if Frankfurt will play in Europe again next season.

“So they have a chance to keep him, but if they miss Europe it’s really difficult to keep him. There are always rumours about Bayern Munich but they’re not concretely interested at the moment.

“There’s a big chance for a club in the Premier League and there is United of course; they need a player like him, so big chance.”

Hello and welcome to Express Sport‘s live coverage of the latest transfer news and rumours from Old Trafford, with just eight days left for Erik ten Hag to add to his squad before the January window slams shut.

We’ll be on hand to keep you updated throughout the day, so grab a coffee and stay tuned…