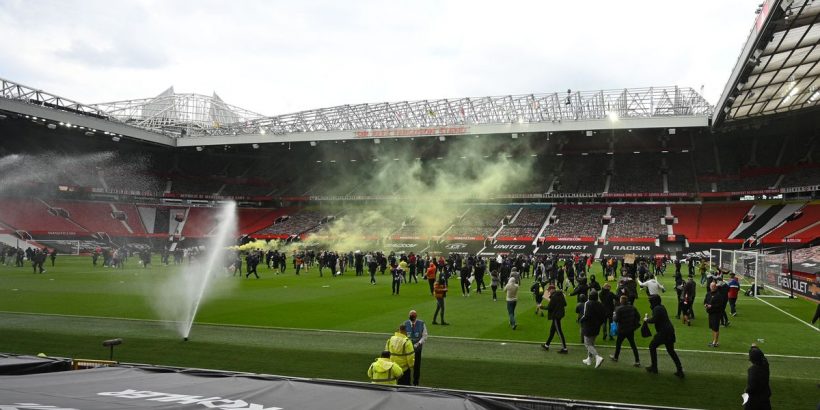 Premier League bosses are facing a nightmare fixture pile-up after Manchester United’s clash with Liverpool was postponed due to fan protests.

The game was officially called off at around 6pm on Sunday night after supporters broke into Old Trafford and demonstrated outside the ground.

Although there were suggestions the game could be moved back 24 hours to Bank Holiday Monday, no new date has yet been confirmed.

United and Liverpool are liaising with each other and the Premier League to thrash out a plan but finding a spare date in the calendar will not be easy.

Both clubs have busy end-of-season schedules, with no obvious date immediately available before the season draws to a close on May 23rd.

Ole Gunnar Solskjaer’s side are in action across each of the next three midweeks, which means the clubs might need to get creative to play the match.

One possible solution could see Liverpool move their game against West Brom on Sunday 16th May to Monday and face United on Friday 14th May.

Two games in four days would put the Reds at a fitness disadvantage as they battle to qualify for the Champions League, but it could be the only option.

All 20 Premier League clubs must finish their season on May 23rd at 4pm, leaving no option for the rearranged fixture to be played beyond that date.

United released a statement after Sunday's events: "Following discussion between the Police, The Premier League, Trafford Council and the clubs, our match against Liverpool has been postponed due to safety and security considerations around the protest today.

"Discussions will now take place with the Premier League on a revised date for the fixture.

"Our fans are passionate about Manchester United, and we completely acknowledge the right to free expression and peaceful protest.

"However, we regret the disruption to the team and actions which put other fans, staff, and the police in danger.

"We thank the police for their support and will assist them in any subsequent investigations."