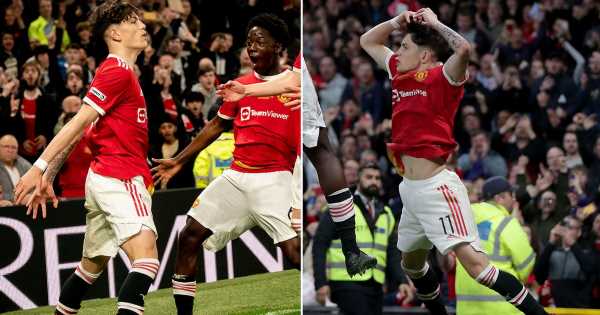 The Spaniard, 17, found the back of the net with a 77th-minute penalty – United’s second goal during their 3-1 win over Nottingham Forest – and proceeded to emulate the superstar with the subsequent move. The goal was quite fortuitous as Garnacho appeared to be brought down on the edge of the box by Zach Abbott rather than inside it.

Garnacho added to his first goal and Rhys Bennett's opener to cancel out Joshua Powell’s level for the away side, as United clinched their 11th FA Youth Cup title.

A record 67,492 were at Old Trafford to witness the final, a huge leap from the previous best of about 37,000 against Arsenal in 2007. In the stands watching were former United boss Sir Alex Ferguson, as well as current players Bruno Fernandes, David de Gea, and captain Harry Maguire.

Ronaldo’s SIU celebration has become synonymous with the CR7 brand, but the attacker has always insisted that the move was thought of spontaneously.

Do you think Garnacho will become a United star? Let us know in the comments section below

“It was when we [Real Madrid] were playing Chelsea in the USA [a 3-0 win over the side coached by Jose Mourinho in August 2013] and I really don’t know how it came about,” Ronaldo said in an interview with YouTube channel Soccer.com.

While in 2019, he explained how it came to him. "I started to say ‘si’, it’s like ‘yes’, when I was in Real Madrid. When we would win, everyone would say ‘siiiii’ and so I started to say it. I don’t know why, it was natural.

“I was in the USA and we played against Chelsea and I don’t know where this is coming from, the celebration. Since that, I started to do it more often and I feel like the supporters and the fans see it and they’re like ‘Cristiano, siiiiiiuuuu’.

“I’m like ‘wow! People are reminded of me because of it!’ So it’s good, and I’ll continue doing it like that.”