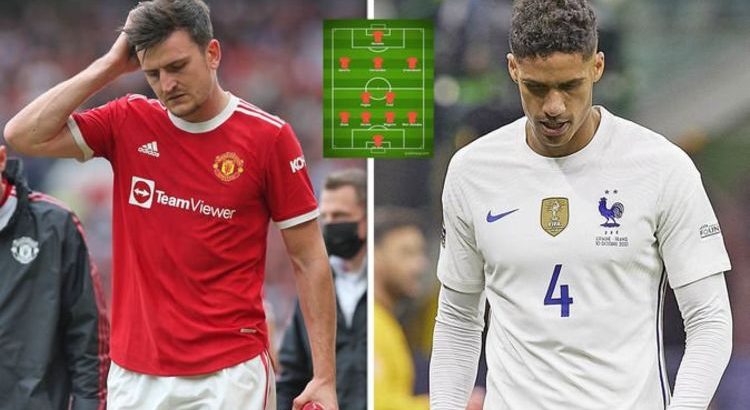 Manchester United were dealt a blow on Sunday night when Raphael Varane limped out of France’s 2-1 Nations League final win over Spain. And with Harry Maguire already crocked, the Red Devils can be forgiven for fearing the worst. Especially with such a daunting run of fixtures ahead…

United go up against Leicester on Saturday, who have narrowly missed out on Champions League football over the past two years.

They then face Liverpool and Tottenham either side of tricky Champions League contests with Atalanta, with Manchester City and Watford then up next.

Given United have struggled against lesser opposition so far this term, that doesn’t bode well.

Without Maguire and Varane, it definitely gives Ole Gunnar Solskjaer a headache as he looks to win the title this term and ease the pressure on his shoulders.

So Express Sport will now take a look at United’s best XI if the duo stay injured.

At the end of last season, David De Gea looked finished at United.

The Spain international had been poor in the Europa League final defeat to Villarreal, failing to save a single penalty in the shootout and fluffing his own effort from 12 yards.

However, since returning for pre-season, De Gea has been back to his blockbuster best.

He was particularly impressive in matches against Southampton and Wolves, while also starring in the Champions League victory over Villarreal.

It’s bad luck for Dean Henderson that he had coronavirus at the start of the campaign because the No 1 jersey is now De Gea’s to lose.

It really is a grim prospect if United are to be without Maguire and Varane.

Maguire has been a consistent performer ever since his arrival from Leicester back in the summer transfer window of 2019.

And Varane has made a solid, if unspectacular, start to life at Old Trafford since joining from Real Madrid in the summer.

Now, United may have no choice but to play Victor Lindelof and Eric Bailly together.

That partnership has never really convinced yet now is the time for both players to show they’re truly up for the task of marshalling the club’s backline.

And it was another example of Paul Pogba winning a trophy with his country while being played in the middle of the park.

Though he’s done well in an offensive position over the past year, the Red Devils need to move him back into the middle to accommodate their other attackers.

Playing Pogba alongside Fred, consistently, may help the pair strike up a better connection than the one they’ve currently got.

And they’d be able to give Bruno Fernandes a platform to get even better, focusing on the defensive duties.

With Marcus Rashford yet to return, it’s difficult to predict when he’ll be involved for United again.

So we’re going on the basis that the England international’s comeback from injury isn’t imminent, even if he’s training again.

With Rashford injured, it gives Jadon Sancho more of a chance to prove himself on the left wing.

On the right, with Sancho on the opposite flank, Mason Greenwood is the best option they have.

And, up top, Cristiano Ronaldo is their undisputed No 9 – despite Solskjaer also having Edinson Cavani at his disposal.