Manchester City 6-1 Southampton: Raheem Sterling hits brace as Pep Guardiola’s side return to top of the table with emphatic victory over Southampton

This was another ominous, hungry and complete team performance from a Manchester City team that continues to seek new standards. This was another pointer to Pep Guardiola’s team retaining their Premier League title next May. It is hard to imagine that not happening.

It was never a contest, though, and Southampton have to accept some of the blame for that. City were excellent partly because they so badly wanted to be but also because lame, tame Southampton allowed them to be.

With that in mind, maybe it was the fourth goal, arriving just before half-time, that summed this dreadfully one-sided game up most accurately. 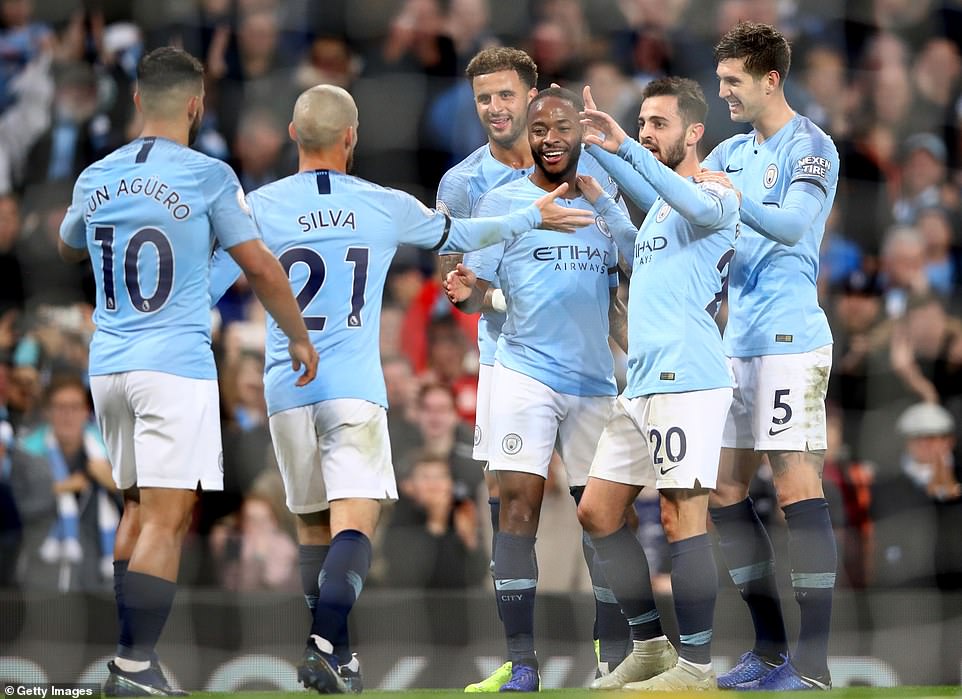 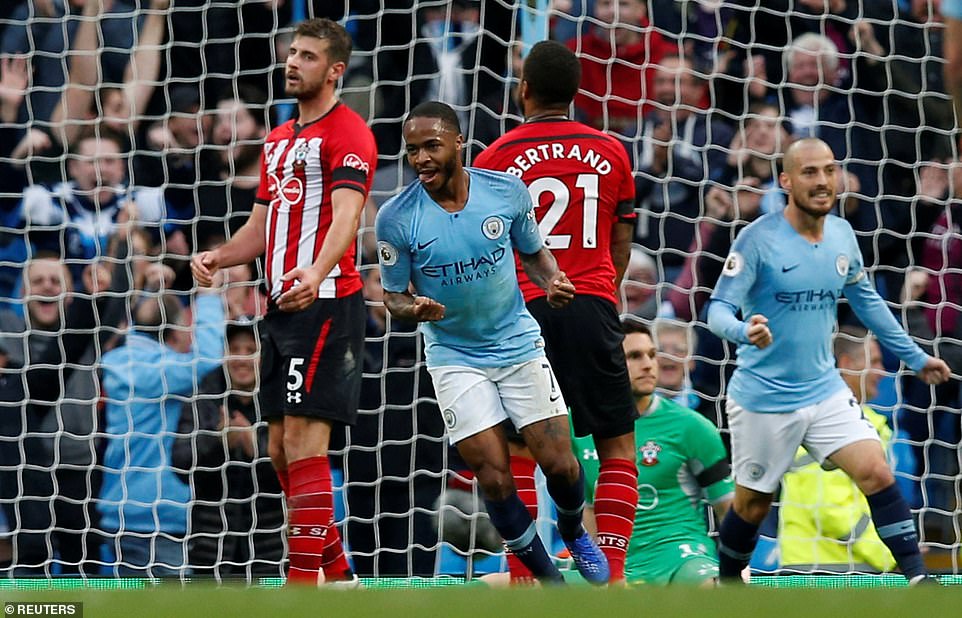 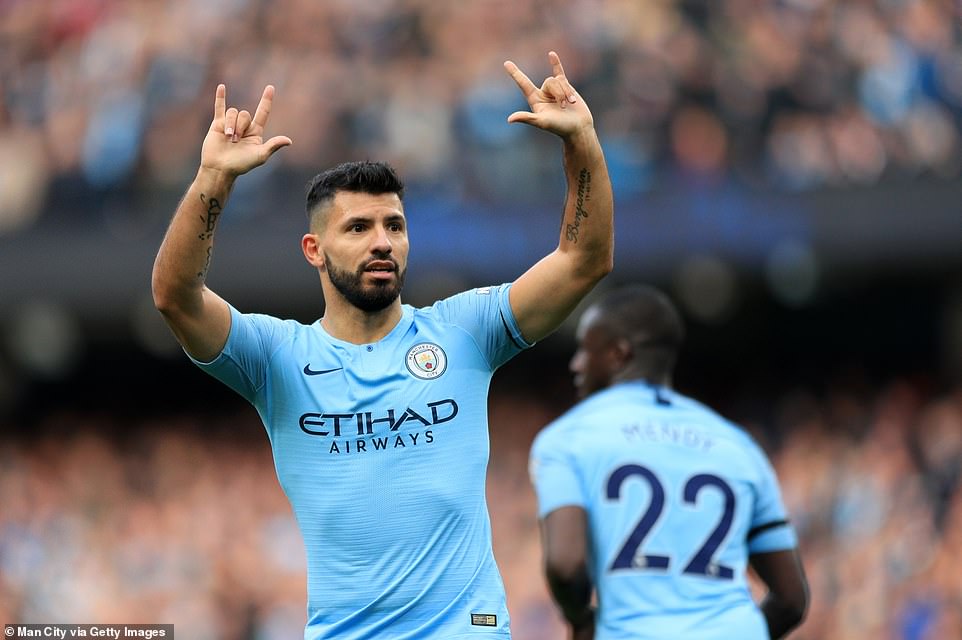 Firstly, Sergio Aguero -150 Premier League goals and counting after this game – showed more desire than Cedric Soares to steal the ball from him at the byline. Cedric, the Southampton right-back, was hoping the ball would run dead but Aguero was having none of that.

So City were in a dangerous position but still the champions should not have scored. Aguero’s low cross to Raheem Sterling was miskicked by his team-mate, giving Southampton defender and captain Ryan Bertrand the chance to tackle.

But the problem was that Bertrand had inexplicably turned his back on the ball, just as Cedric had done when David Silva had lashed in the third goal almost half an hour earlier. It’s an inexcusable footballing sin, of course, but Southampton were proving rather good at it.

So Sterling scored and Southampton were left embarrassed once again. 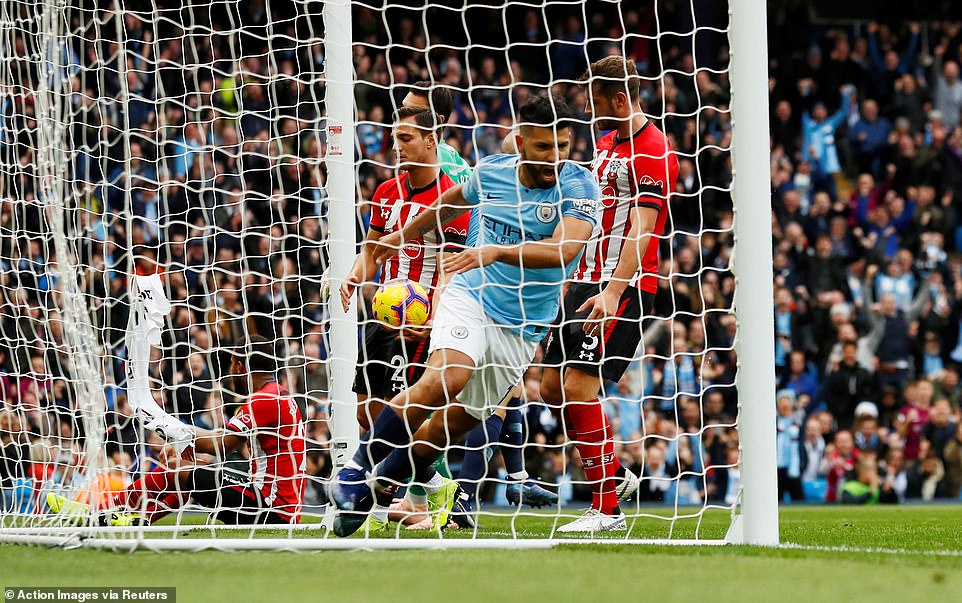 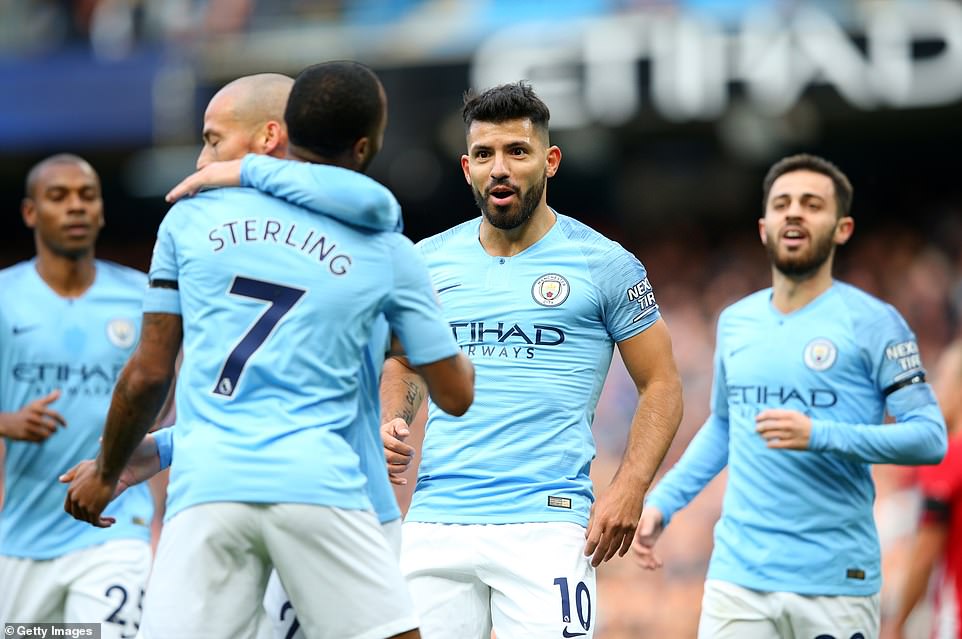 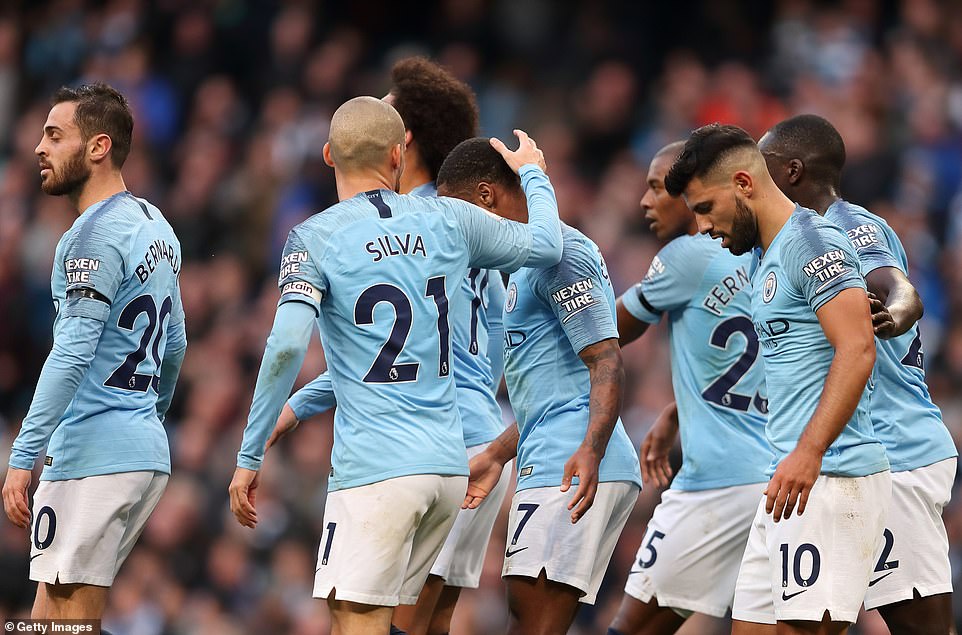 MAN OF THE MATCH: Raheem Sterling 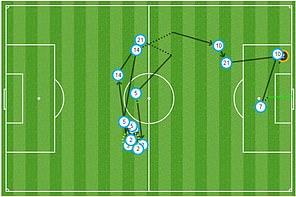 Here last season the team from the south coast almost took a point from City. It required a lovely goal from Sterling deep in added time to earn victory.

This time it was very different. City were far too good and Southampton far too bad for this to be a contest. From the moment Southampton central defender Wesley Hoedt scored in his own goal in the sixth minute, this game was only going to end one way. It was only a question of just how many goals City would score.

It will be a surprise if Guardiola’s team don’t defend their title. Liverpool have started impressively and have improved. The problem is that City – 25 points ahead of Liverpool last time round – have improved too.

It is early to make such a claim but it’s hard not to. City are too good for just about everyone they meet and have a very deep squad, a squad that can absorb the loss of a player like Kevin de Bruyne for the second time this season and carry on moving forwards regardless.

Another factor is that teams arrive at the Etihad mentally and emotionally beaten before the game has started. That means that City will win just about all of their home games. It was certainly the case here as Southampton began badly and immediately got worse. 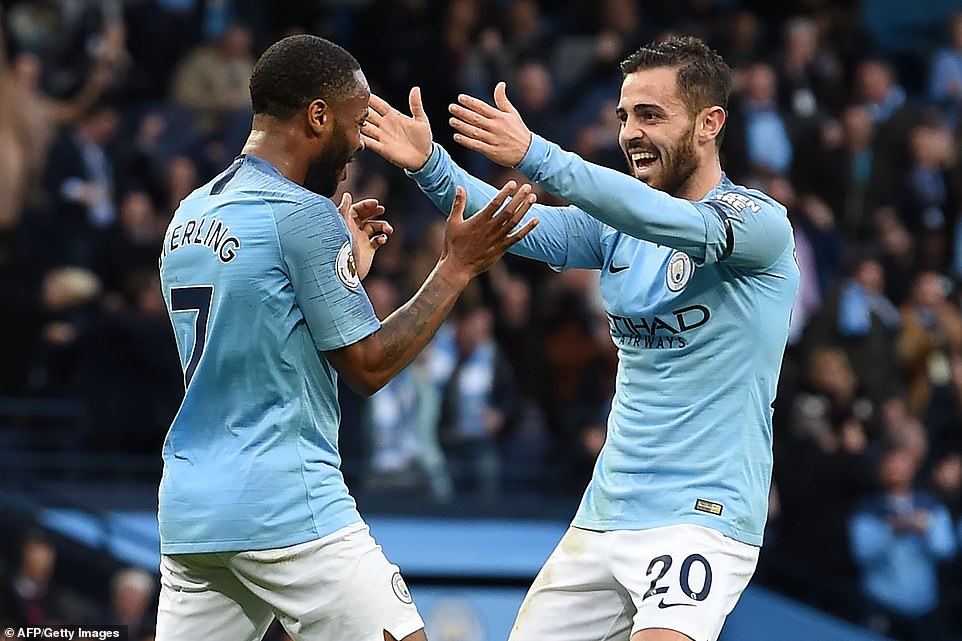 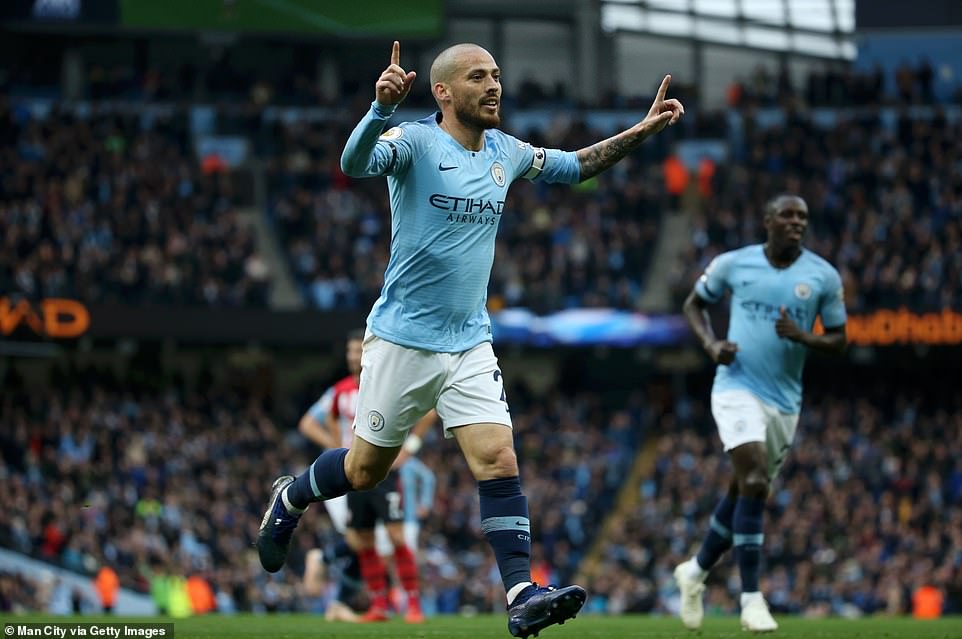 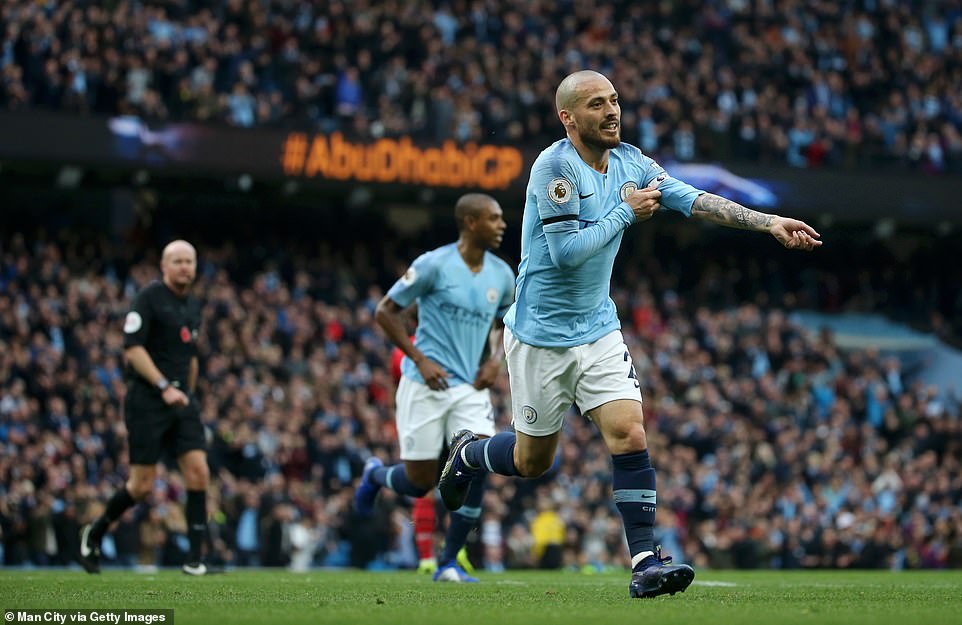 Silva, who captained the side, helped City to secure what was a largely comfortable victory over Southampton 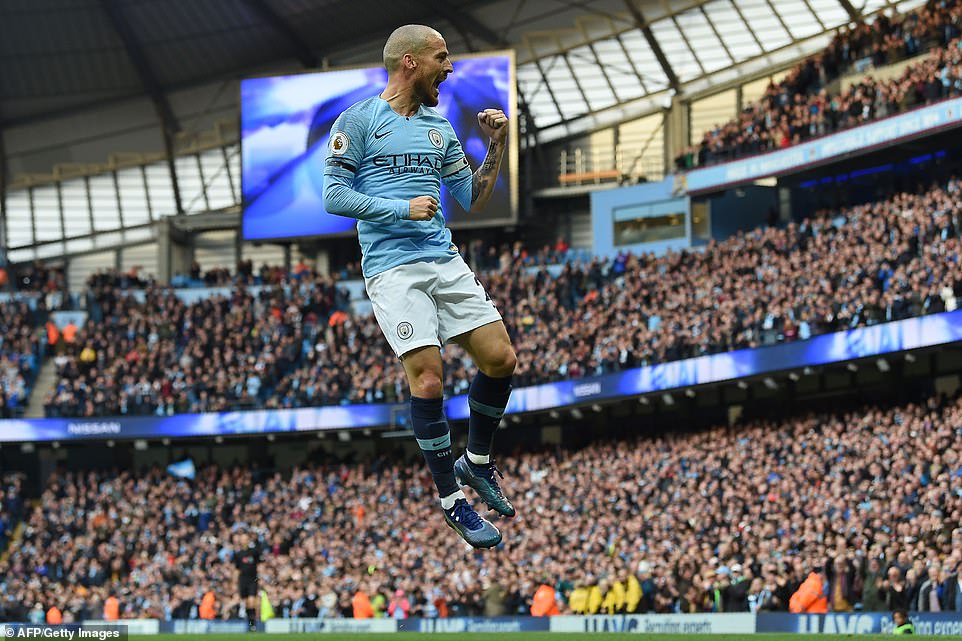 It was embarrassing for visiting manager Mark Hughes and not just because he used to work here. This kind of defensive display would shame any manager, never mind one as battle hardened and proud as Hughes.

City’s first half goals were easy, far too easy. The first was created by an astute pass from Silva inside Cedric and when Leroy Sane crossed low, Hoedt drove the ball high in to his own net under pressure from a clutch of blue shirts that had descended upon him like flies.

There was not too much blame to attach for that one. Things like that can happen against the best teams.

But it soon became clear that Southampton did not have the appetite or the wherewithal to defend properly and if you give off a sense of weakness or vulnerability against City they will tear you apart like pack dogs. 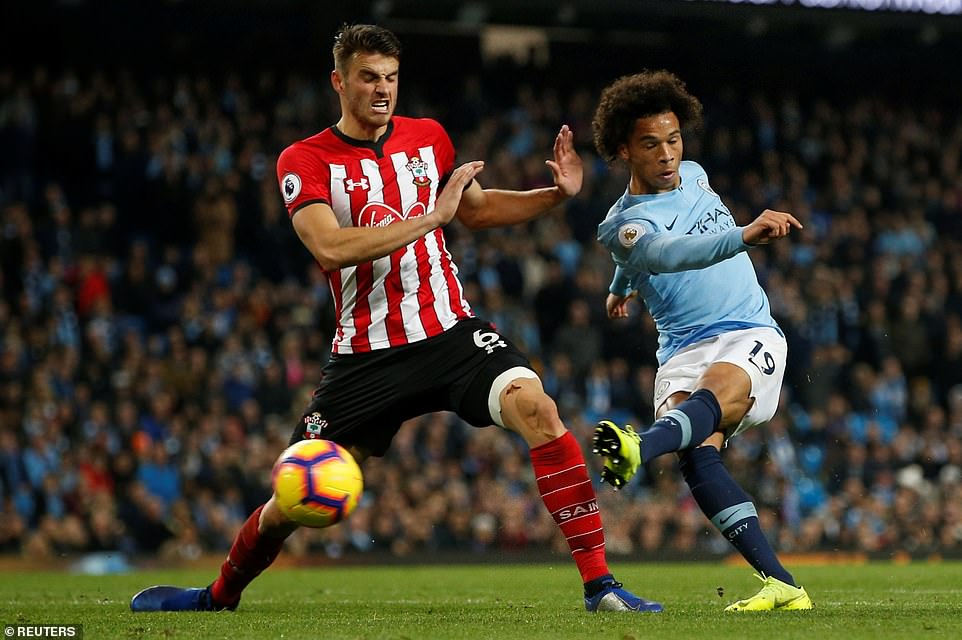 Leroy Sane, who had earlier hit the post, shows terrific composure to score City’s sixth goal in the closing stages of the game 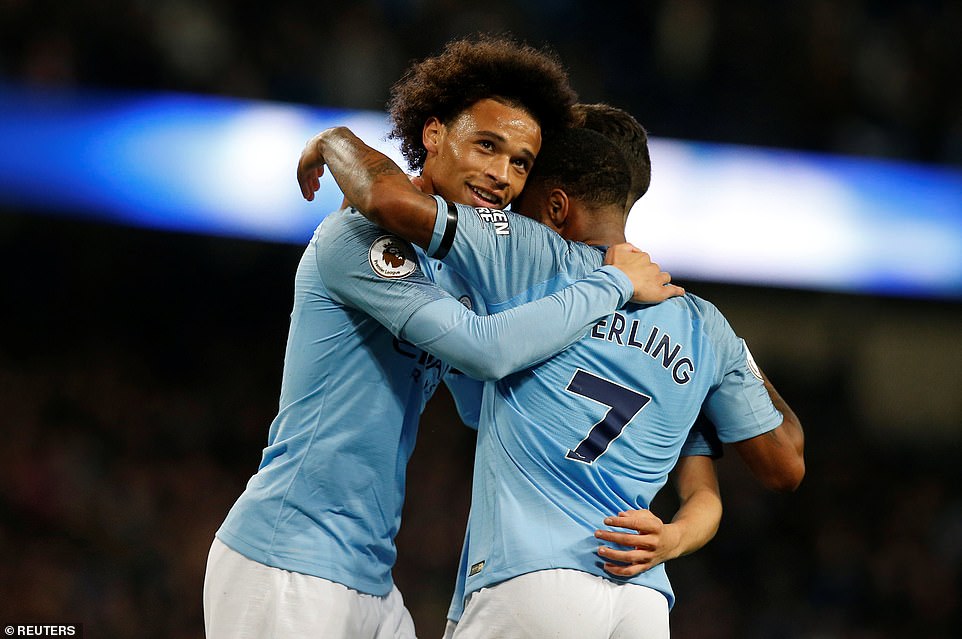 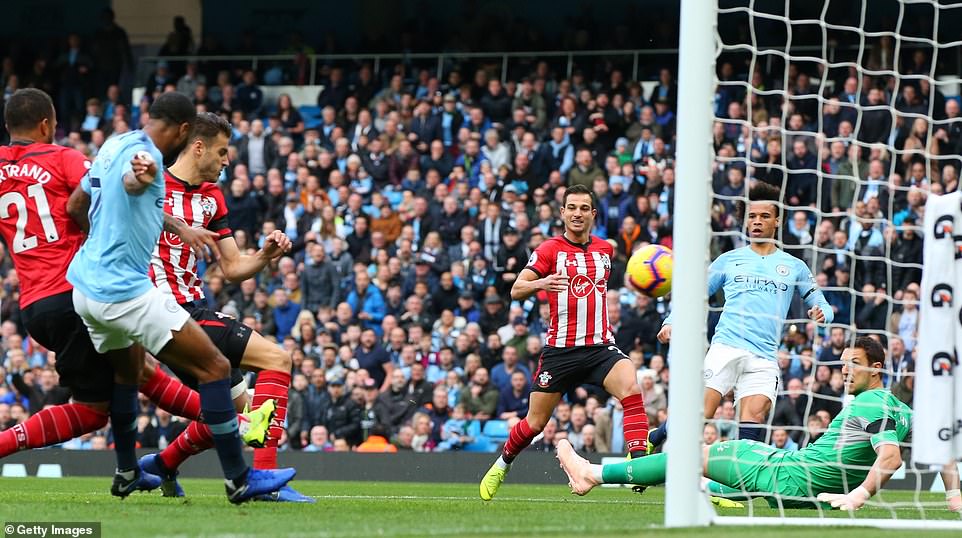 Southampton get off to a bad start, with defender Wesley Hoedt scoring an own goal after good work from Leroy Sane 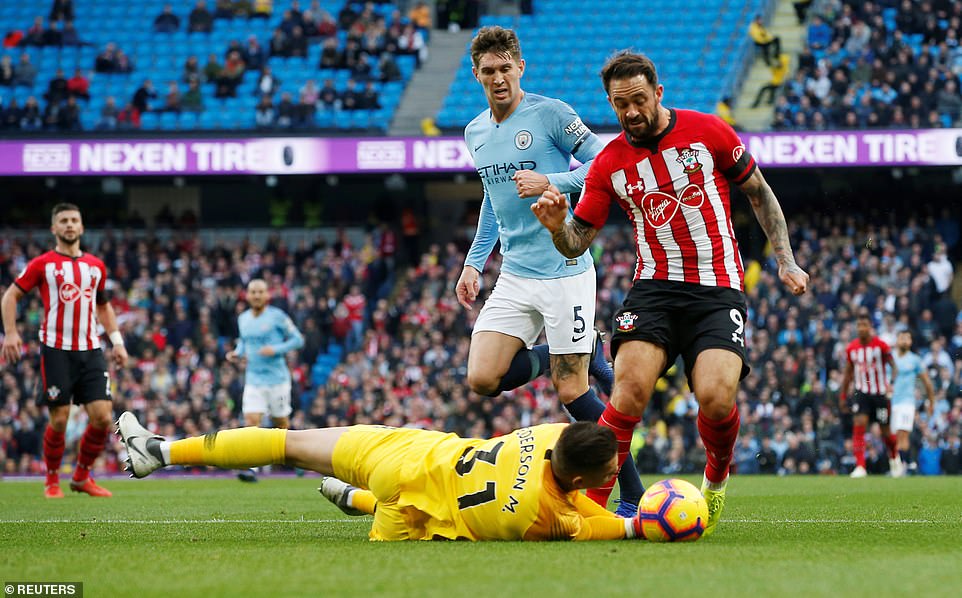 Sterling – City’s best player – eased in to the penalty area with intent in the 12th minute and awaited challenges that didn’t come. Hoedt in particular didn’t wish to get involved and this allowed the winger to square the ball to Aguero who scored from close in.

It was easy, far too easy. Cedric turned his back on Silva six minutes later when a cross ballooned off a defender and dropped to the Spaniard at the far post. Maybe the Portuguese defender hoped that Silva didn’t have the skill to strike a dropping ball so purely and accurately. Maybe he just didn’t fancy a ball in the face. Whatever the case, Silva drove the ball high in to the goal and with only 18 minutes gone the game was effectively over.

Some poor goalkeeping from City’s Ederson gave Southampton a penalty just before the half hour. Danny Ings was brought down as he ran on to a good pass from Nathan Redmond and it was the centre forward who scored from the spot. That was the first goal City had conceded in the league since September 1 and it came right out of the blue. 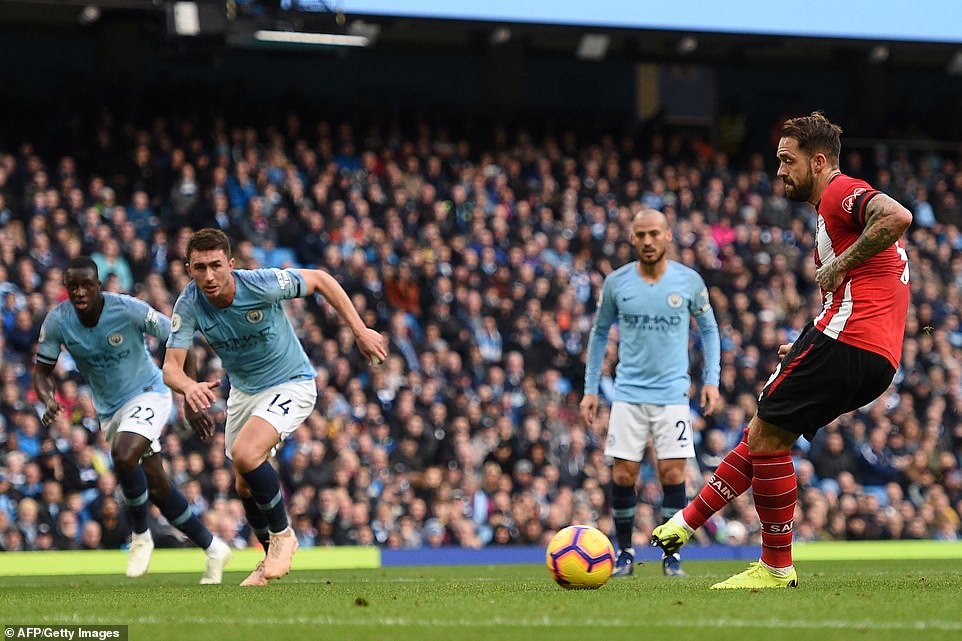 City were irritated but no more and almost brought Southampton to their knees immediately as some intricate play in the opposition penalty area left the visiting defenders in another mess. In amongst it all was a shimmy from Sterling and a nutmeg from Aguero but somehow there was no goal at the end of it. On the touchline Hughes looked exasperated and it was no wonder. He wasn’t to be spared long. By half-time it was four and it didn’t flatter City one bit.

It was clear there would be more goals for City if they wanted them, and they clearly did. There is an impressive appetite about this team and you could see it in every touch, every tackle and every sprint off the ball.

Ederson made a couple of decent saves, both from Ings, as Southampton tried to impose themselves but then Sane struck a post with a curling left foot shot before Sterling finished off a lovely team goal in the 67th minute, taking a perfect pass from Aguero in his stride before driving a low shot through Alex McCarthy’s legs at the goalkeeper’s near post.

Sterling rolled a pass in to Sane’s path in the very last minute and with a strike of the German’s left foot the walkover was complete. Sterling has now been involved in 40 Premier League since the start of last season, a total comprising 24 goals and 16 assists. The England player will have more difficult afternoons than this. 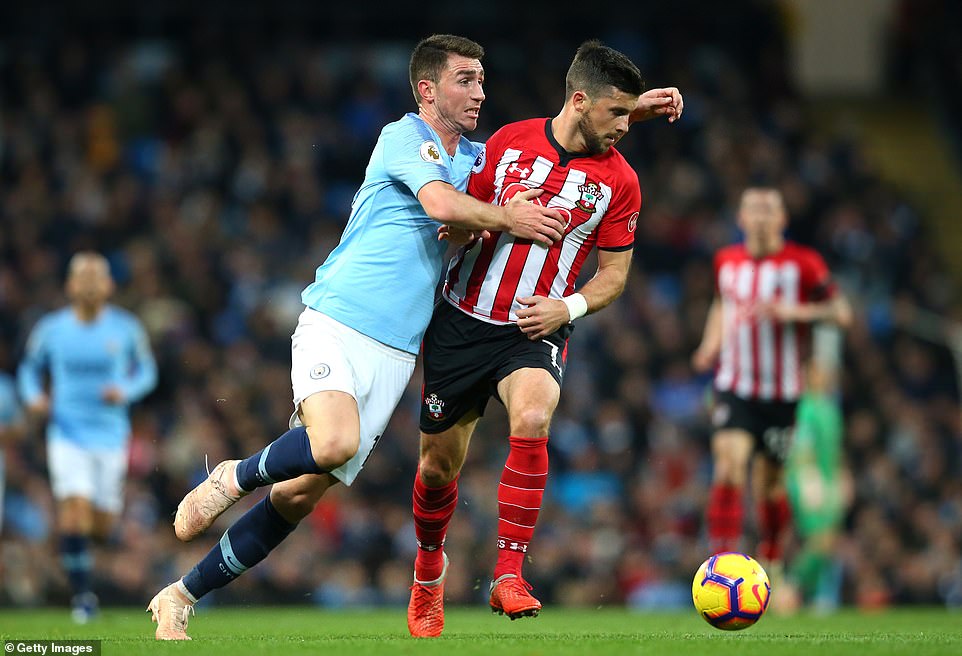 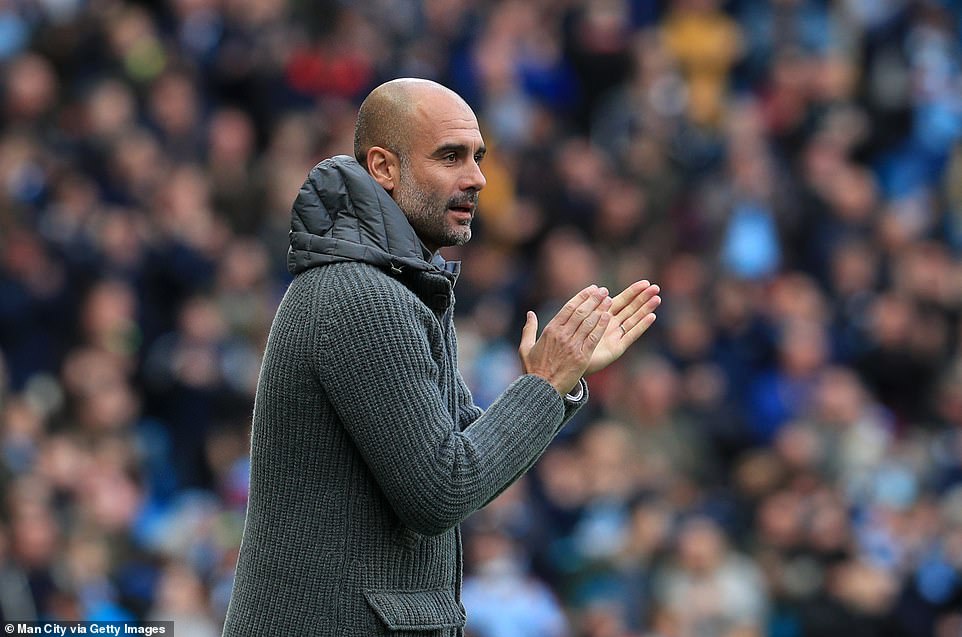 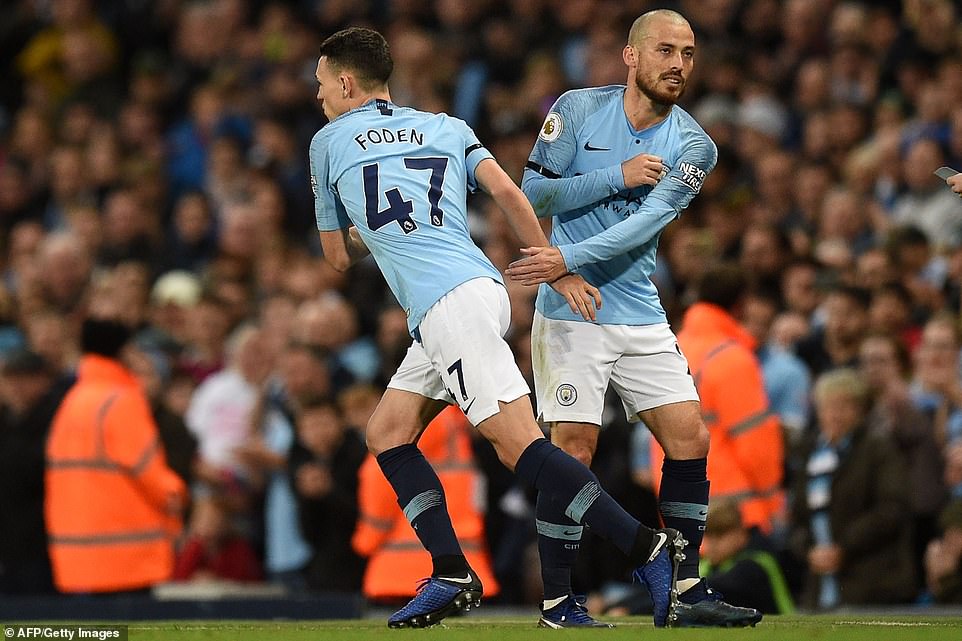 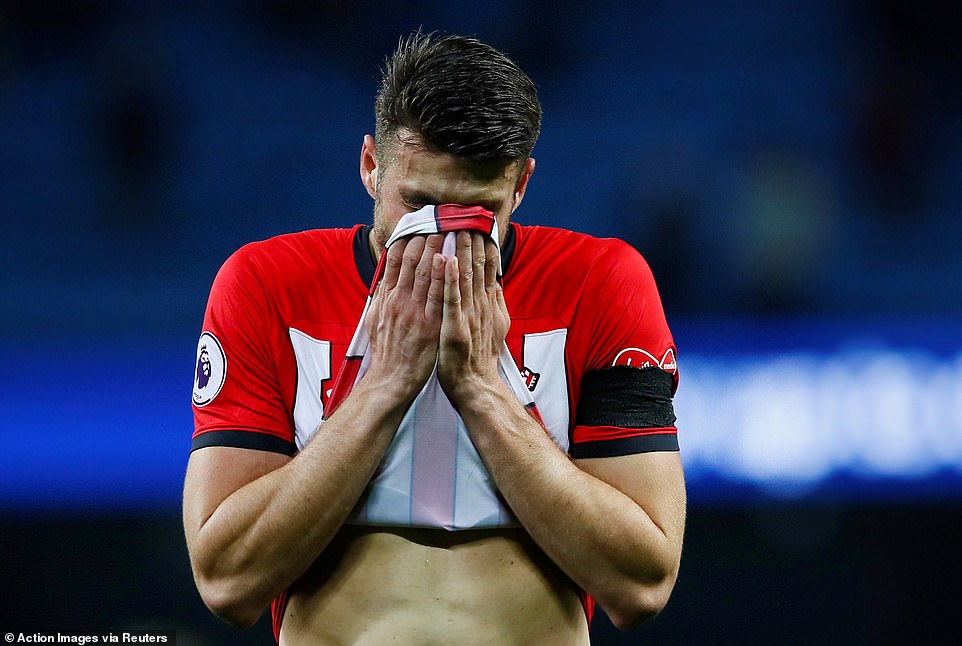 Southampton defender Hoedt, who scored an own goal, is dejected after the full time whistle blows 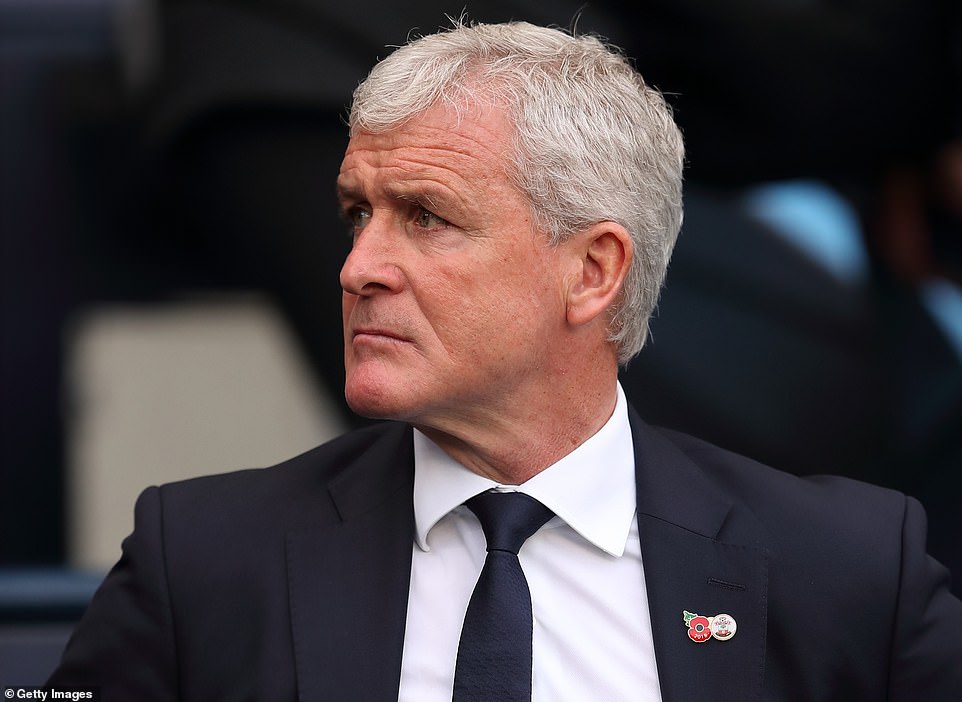