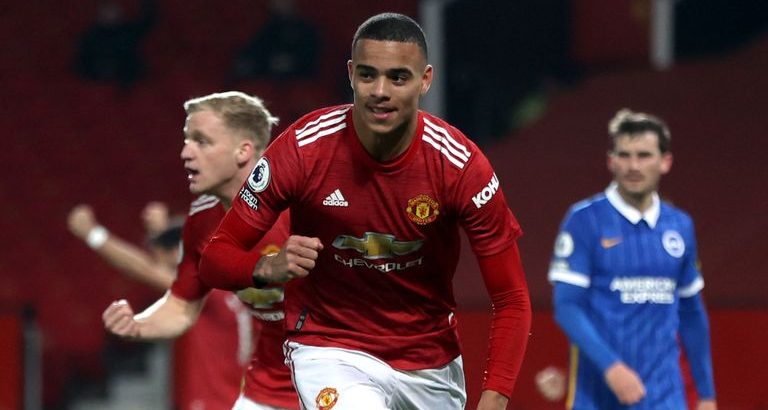 Mason Greenwood completed Manchester United’s spirited second-half fightback as they came from behind to beat Brighton 2-1 at Old Trafford.

Danny Welbeck headed the Seagulls into a deserved lead against his former club (13) with a lacklustre United having failed to register a single shot on target in the opening 45 minutes.

But Marcus Rashford restored parity with his 19th goal of the season (62) before Greenwood stooped to head in Paul Pogba’s mis-hit as Brighton’s resolve was broken with seven minutes remaining.

The result comes as a relief for Ole Gunnar Solskjaer, whose side stay second on 60 points – meaning Manchester City still require a further 11 to be confirmed as champions. Brighton stay 16th, six points clear of the relegation zone. 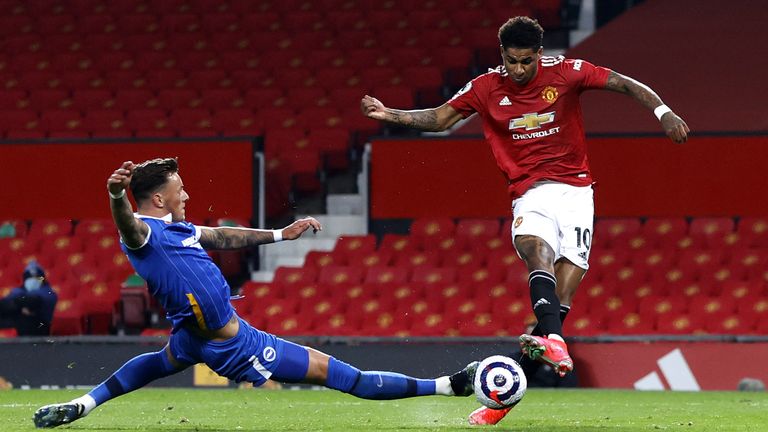 Man of the match: Bruno Fernandes.

Brighton were seeking to win three consecutive Premier League games for the first time since October 2018, and Graham Potter stuck with the same team that dismantled Newcastle in their previous fixture before the international break.

United welcomed back Edinson Cavani, and they came close to breaking the deadlock inside nine minutes when Bruno Fernandes’ cross was headed out only as far as Mason Greenwood but his low shot struck Robert Sanchez’s left-hand post.

United had won five successive meetings with the Seagulls but that was as good as it got for Ole Gunnar Solskjaer’s men in the first half as the visitors began to assert themselves – and they edged in front four minutes later. Pogba’s slack pass inside to Fred was gobbled up by Pascal Gross as Neal Maupay was sent on his way down the right channel. Luke Shaw gave the forward too much time to shape a cross that was met by Welbeck, forcing a smart save with the legs from Henderson but the ball looped back up and was headed over the line at the second attempt.

In doing so, Welbeck became the first player to score as many as three Premier League goals against United after leaving the club.

If Solskjaer expected an immediate response, he didn’t receive it. Instead, Potter continued to encourage his players forward and Brighton were unfortunate not to double their lead when Henderson showed sharp reflexes to tip over Lewis Dunk’s header from a Gross free-kick.

It was a seventh straight start for the England goalkeeper, while Edinson Cavani, Bruno Fernandes, Luke Shaw and Marcus Rashford were the changes from the side defeated in the FA Cup at Leicester.

Brighton were unchanged from the 3-0 win against Newcastle before the international break.

The Seagulls sniped time and again in the opening period, with Pogba and Fernandes both guilty of giving the ball away regularly – and Henderson was fortunate when he spilled another Gross set-piece having collided with Harry Maguire.

“It seems ridiculous this Brighton team were involved in a relegation battle six-pointer last time out,” Sky Sports’ Peter Smith commented at the break. “They’ve gone toe-to-toe with the second-placed team in the league, away from home, and looked the better side so far tonight. 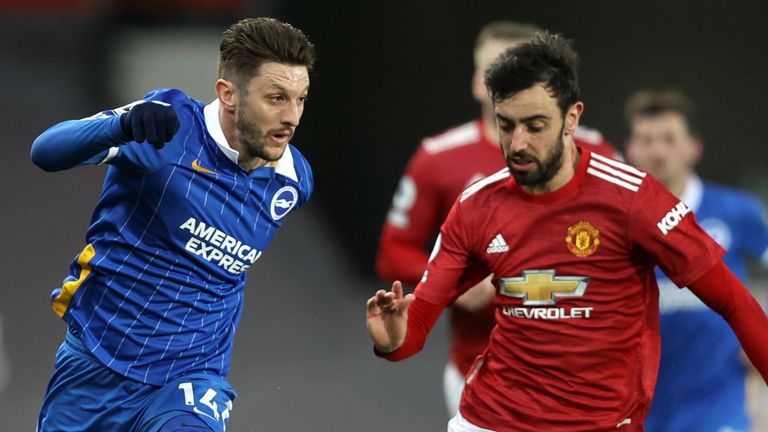 “The potential of this team is far beyond their current league standing.”

United had failed to have a shot on target in the first half of a Premier League game at Old Trafford for the first time since August 2019 against Crystal Palace – but they finally tested Sanchez when Rashford collected Maguire’s pass seven minutes into the re-start but the long-range effort was straight at the Brighton stopper.

There was more intent about Solskjaer’s side, with Scott McTominay intensifying his warm-up on the touchline appearing to have the desired effect. On the hour-mark, Sanchez came haring off his line to smother Fernandes’ shot from Pogba’s through-ball – but the reprieve for Brighton was short-lived.

Joel Veltman lost possession and clattered into Fernandes as he sought to atone for his error, but referee Mike Dean waved on the advantage as the Portuguese had found Rashford to his left and the forward swept home the equaliser with a precise, first-time finish.

Brighton still posed a threat on the counter and there were penalty claims when Welbeck was unable to reach Maupay’s low cross, feeling a tug from Maguire but VAR Peter Bankes stuck with Dean’s on-field decision of a goal-kick.

Should Brighton have had a penalty? 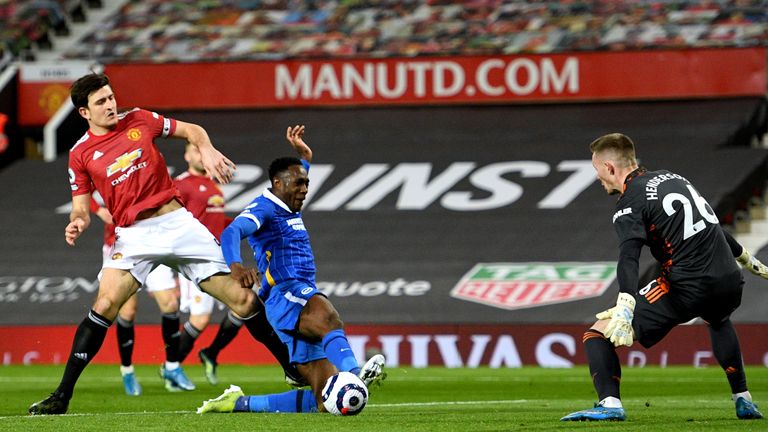 United nearly took full advantage of the let-off. Sanchez’s save from Fernandes’ speculative drive fell straight to James, who squared for Greenwood, but the teenager’s shot on the stretch just cleared the crossbar.

The miss didn’t play on his mind, however, as with eight minutes remaining, Greenwood was in the right place to head in Pogba’s miscued shot despite Ben White’s best efforts on the goal line. It was cruel on Brighton but United had dug in.

Martial to miss rest of season?

Anthony Martial missed Sunday’s match through injury and Ole Gunnar Solskjaer says the forward’s season could be over.

“Unfortunately he’s sprained his knee with France,” the United boss told MUTV. “It’s always when they go away on internationals, you’ve fingers crossed and you hope that they’re going to come back fit.

“Paul’s played in all three games – 30, 60, 90 minutes – so that was a boost for us but losing Anthony for what might be the rest of the season is very disappointing, especially when the reports and signals are from there that it’s wasn’t (anything) serious but it looks a bad one, yeah.” 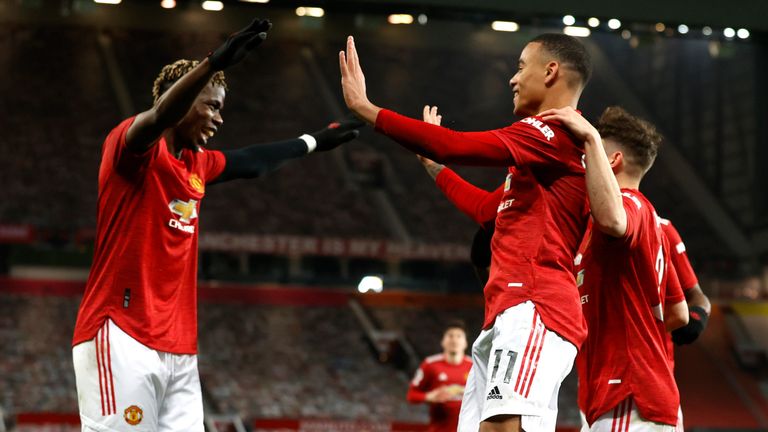 Manchester United boss Ole Gunnar Solskjaer told the BBC: “It’s always difficult to play Brighton. We have had good results and we’ve had to earn them the hard way. We managed to find a way in the second half.

“Danny [Welbeck] was in the reserves when I was the coach. He is a big talent. It’s great to see him back playing football with all the injuries he has had. We gave it away sloppily [for his goal]. Dean [Henderson] makes a good save first but then the rebound comes in. We had to come in at half time and compose ourselves as we didn’t create much after they scored.

“I thought we started well but when they scored, after that we couldn’t find our rhythm again and we needed half-time to compose ourselves and go again. Second half we played some good stuff. More runs in behind, more movement, better movement.

“Sometimes after international breaks it takes time – and then maybe the fireworks have to be lit at half-time. Mason Greenwood needs to add those goals to his tally because we know how wonderful a talent he is, and when he can add those goals we know he’ll be a good’un.”

Brighton boss Graham Potter told the BBC: “We contributed well in the game. We took the lead and were probably the team which carried the most threat in the first half. We just missed that final pass. Man Utd responded in the second half without creating too many chances. They scored from not too much. Maybe a penalty which Danny Welbeck didn’t get.

“When it was life I thought it was a penalty then I suppose it’s the clear and obvious debate. If Mike Dean had given it I don’t think VAR would have overruled it. There’s nothing we can do in the end. We’re disappointed to come away with nothing.

“I’m confident in terms of the team, the way we’re playing and the personality in the team but until you get the points you can never relax. Sometimes the opposition have some quality that you have to hold your hands up to and say ‘that’s good.’ We’ll keep going.” Man of the match – Bruno Fernandes

Even during off days, Fernandes can be so lethal. He was subdued for large parts of the first half, but as Brighton faded, United’s talisman came to the fore. Fernandes provided four key passes, more than any other player while he also had the most number of shots (3).

He might have sulked and stropped after being clattered into by Veltman having provided the assist for Rashford’s equaliser, but instead he clicked into gear and was involved in the match-winner, setting up Pogba whose dragged shot fell kindly for Greenwood.

‘I’ve been working on my heading’ 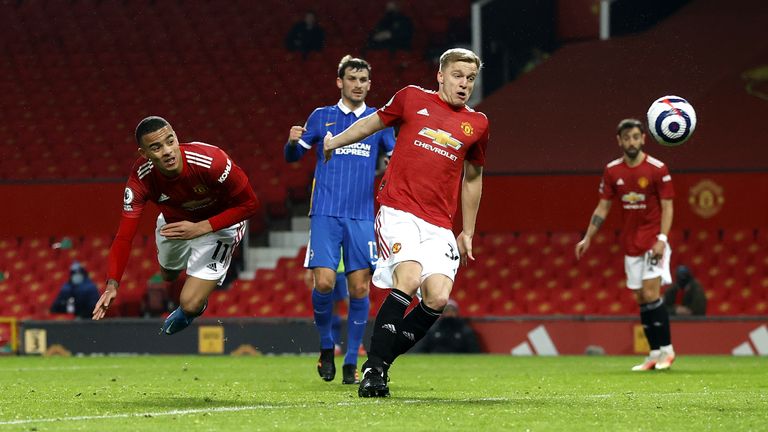 “It was a hard night. When they scored the first goal we knew we had to react and put in a better performance. Everyone was excellent in the second half.

“I don’t think we started very well but we knew we had to switch on and be focused. We should have started that from the moment we came out, but it’s a good three points. There was a lot of men behind the ball and we had to have that creative spark.

“It’s a confidence booster, I’ve not scored as many in the Premier League. I scored a header tonight which is something I’ve been working on a lot behind the scenes.” 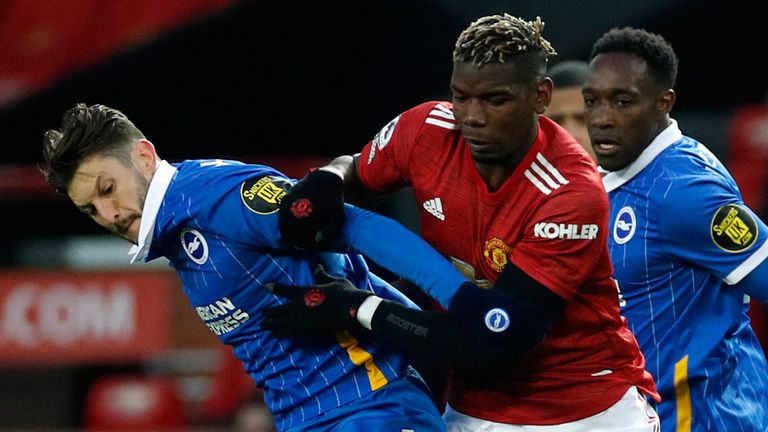 Manchester United travel to face Granada in the Europa League quarter-final first leg on Thursday; kick-off is at 8pm. Their next Premier League outing is away to Tottenham next Sunday, live on Sky Sports Premier League and Main Event. Coverage starts at 4pm with kick-off at 4.30pm.