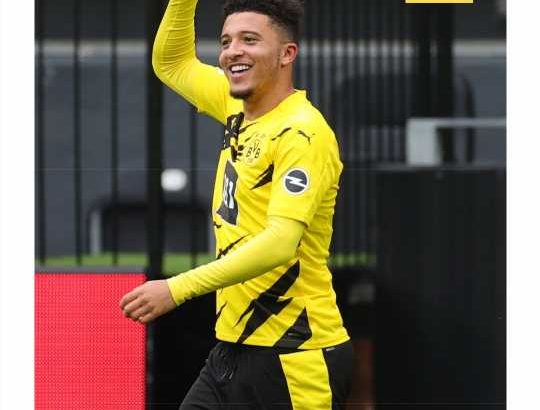 Manchester United has reached an agreement with Borussia Dortmund for the transfer of Jadon Sancho.

It is understood a fee of just under £73 million ($101 million) has been agreed to between the two parties with the England international now set to undergo a medical before the transfer is completed. He will sign a five-year contract at Old Trafford, with the option for a further 12 months.

The two clubs have been negotiating over a fee for a few months, with Dortmund rejecting United’s bid of £67m at the start of June.

What do we know?

Negotiations have continued over the last month between the two sides as they attempted to confirm a fee and also come to an agreement on how the full sum would be paid, with disputes over how much would be paid in add-ons causing holdups.

It is believed the final fee is £72.9 million with no add-ons.

Unlike last summer where an agreement couldn’t be reached, there was continued optimism from the United side this summer that a deal could be finalized.

Dortmund had a gentleman’s agreement in place with Sancho that he could leave should a buying club come up with its asking price, and the Bundesliga side has stuck to its word and let the England international depart.

Sancho will now have to undergo a medical to complete his transfer, which is expected to happen after he has finished international duty with England at Euro 2020.

He has not been starting for Gareth Southgate’s side but still remains a part of the squad as it prepares for its quarterfinal versus Ukraine.

Last season he played 38 games, scoring 16 goals and notching 20 assists for the Bundesliga side.

He signed for Dortmund from Manchester City in 2017 and has gone on to make 137 appearances across all competitions, scoring 50 goals and assisting 67.

The majority of his appearances have been on the right wing, where it is expected he will feature for United, but he has shown his versatility across the front line and has also featured on the left and as an attacking midfielder during his time in Germany.

What next for United?

As anticipated, Sancho is United’s first signing this summer with the club hoping to get another couple of new faces through the door before the end of the window.

A center back remains a priority with Raphael Varane from Real Madrid a top target in that department while the club has also been looking into signing Kieran Trippier from Atletico Madrid to bring competition at right back for Aaron Wan-Bissaka.

Solskjaer said at the end of the season that United needed signings if it is to close the gap on Manchester City and fight for the title next season.