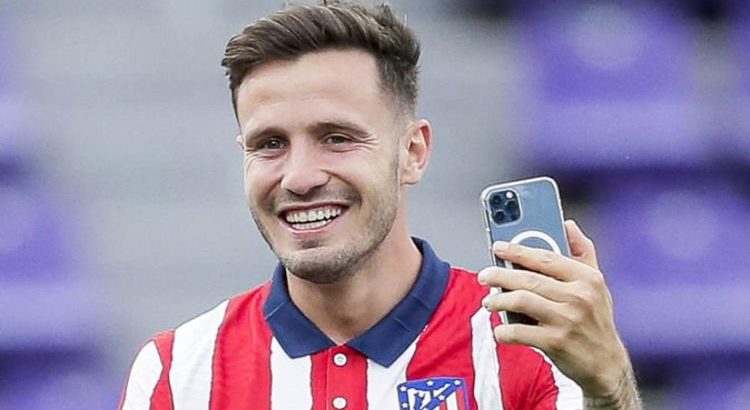 Manchester United are set to compete with Chelsea when it comes to signing Saul Niguez this summer. The Atletico Madrid star has been deemed surplus to requirements by Diego Simeone. So Express Sport will now look at what the Red Devils can offer the 26-year-old to ensure they win the race for his signature.

United are interested in Saul because they feel he can be the perfect upgrade on Fred and Nemanja Matic when it comes to the defensive midfield role.

And that could tempt the player into moving to Old Trafford as a result.

Given United’s plans for Saul, they can offer him a guaranteed starting role for most matches.

They’d likely pair him alongside Scott McTominay, which would then allow Bruno Fernandes to focus on his offensive duties.

And that would mean Fred and Matic having to settle for a place on the bench.

He wouldn’t be assured the same at Chelsea given the importance of N’Golo Kante and Jorginho for Thomas Tuchel’s team.

As mentioned above, United could pair Saul alongside McTominay – with Fernandes playing further ahead.

But, when Marcus Rashford returns from injury, it’s definitely possible he’d be deployed alongside Paul Pogba instead.

Now that, really, could be an epic partnership.

If United can get Pogba playing the way he does for France at the World Cup, they’d be onto a certain winner.

And Saul has the potential to help the 28-year-old scale new heights in the future, providing he stays at the club.

As one of the wealthiest clubs on the planet, United have the resources to offer Saul a big pay packet.

The Spain international currently earns £230,000-a-week over in Spain.

But the Red Devils could go higher than that to ensure they win the race for his signature, with a salary of £300,000-a-week previously mooted.

Chelsea, obviously, have plenty of money in the bank too.

Yet United have shown in the past they’re willing to gazump their rivals if needed and that means Saul moving to the Theatre of Dreams is very much a possibility.

A platform to grow his brand

When a player joins United, their stock normally soars.

And that’s what they’re able to offer Saul, as well, as they plan for a brighter future under Solskjaer.

Sancho and Varane’s follower counts on Instagram have both drastically increased since their moves to Old Trafford.

And Saul could get similar treatment.

Fans certainly want to see him arrive, especially with the player regularly linked with a move to the club ever since 2013.

“I think if the right player becomes available for the right price, Ole Gunnar Solskjaer will go and get him,” Ferdinand told his FIVE YouTube channel.

“The problem is who is out there and who could be a good fit? Saul Niguez would be a perfect fit and he’s asking price was £160m a couple of years ago, now it’s more like £40-50m.

“In today’s game that’s a decent price for someone like him who has Champions League experience.

“I think Declan Rice would be a massive addition to this squad. I’m a massive fan of his. I would love to see him keep progressing.

“He was brilliant for England in the summer. I think if West Ham keep him they’ve done unbelievably well. I think he does well staying at West Ham or if he goes.”