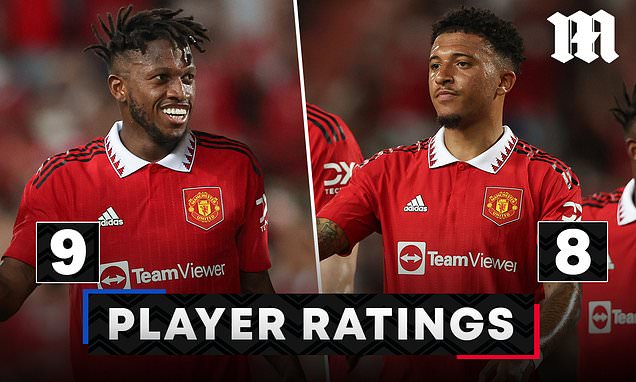 MANCHESTER UNITED PLAYER RATINGS: Jadon Sancho shines and Fred scores a stunner as the Red Devils hammer Liverpool to get Erik ten Hag’s reign off to a flying start

Manchester United ensured Erik ten Hag’s tenure got off to the perfect start by thrashing Liverpool 4-0 in a pre-season friendly in Bangkok.

Jadon Sancho, Fred and Anthony Martial all got on the scoresheet in the first half, before Facundo Pellistri rounded off the scoring after the interval. 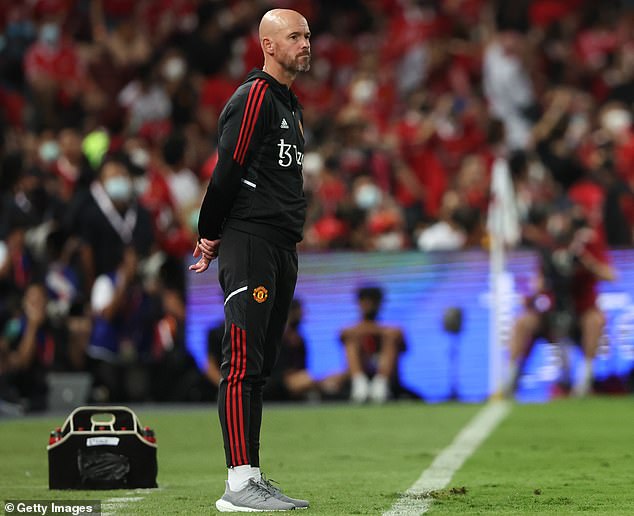 A couple of solid saves early on. Can still improve with his feet, but a relatively straightforward start to pre-season for de Gea. Looked to be in a little discomfort as he went off, which United will hope is not too serious.

Linked up nicely with Sancho and was unlucky to see his shot cannon back off the bar in the first half. Looks likely to start the season as ten Hag’s first-choice right-back. 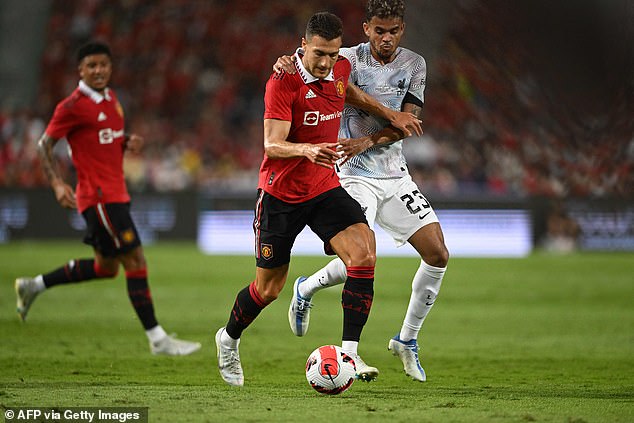 United will hope that Varane can stay fit this year after an injury-hit debut campaign at the club.

He got some much-needed game time under his belt here, although he went down after taking a knock late in the first half, and seems to be a player that will have fans wincing whenever he looks in any sort of discomfort.

Likely to be the player to drop out when Harry Maguire returns but produced a steady performance here.

A big season ahead for Shaw who really struggled in 2021-22. Looked reasonably sharp, and provided some neat touches down the left flank.

Scored a delightful chip, making Alisson look a little foolish, which is a rarity. Deserves a high rating for undoubtedly producing the moment of the match.

Started well under Rangnick last term as well, and if he keeps playing like this, he may become a reliable player for ten Hag. 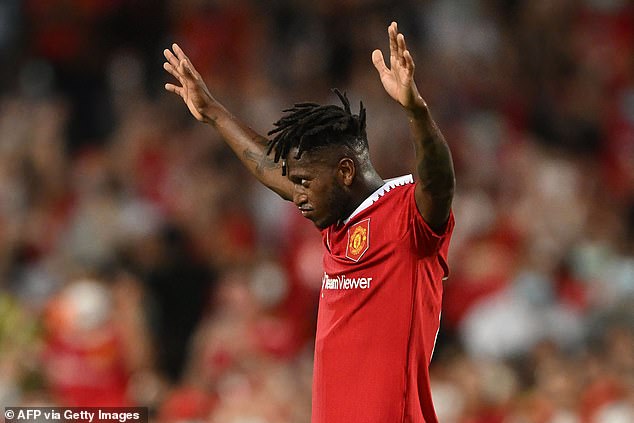 United fans may be hoping to see the back of ‘McFred’ in the upcoming campaign, but the duo worked well together here.

McTominay was outshone by his team-mate, with the Brazilian’s chip a standout moment, but he did very little wrong himself.

Took his goal well to open the scoring, and played a measured pass through for Dalot, who hit the woodwork. After an underwhelming first season at United, this was much more like it from the England star. 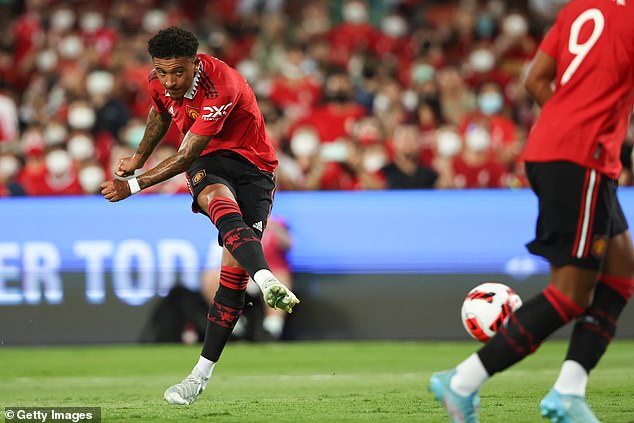 Jadon Sancho took his goal very well, firing the ball into the bottom corner of the net

Linked the play well, particularly playing the ball out to the wings nicely to get Sancho and Rashford involved.

Was wasteful in possession at times last season, but was much tidier with the ball before he was replaced at half time.

Should have scored or passed to Sancho for a tap-in early on, but did neither. Plenty of endeavour, but just lacked quality in the key areas of the pitch.

Excellent closing down to win the ball off Rhys Williams, and then dinked the ball beautifully over Alisson.

The finish of a top-class player, and if he can produce more moments like this, he could have a future at United after all. 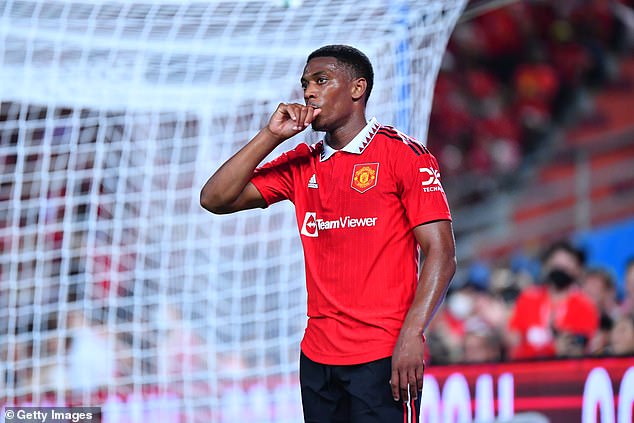 Got the wrong side of Trent Alexander-Arnold at one stage in the second half and was taken out by Adrian, but he was eventually flagged offside. Currently looks like he could be battling with Rashford for the starting berth on the left wing.

Played in an unfamiliar role as a left-sided centre-back. Made a silly error which nearly allowed Salah to pull one back late on.

Could be on his way out of the club in the coming weeks but he got 45 minutes after the break. Most of Liverpool’s attacks came down the other flank, so he was not heavily involved.

Was only on the fringes when he came on as he struggled to get his foot on the ball to dictate play. 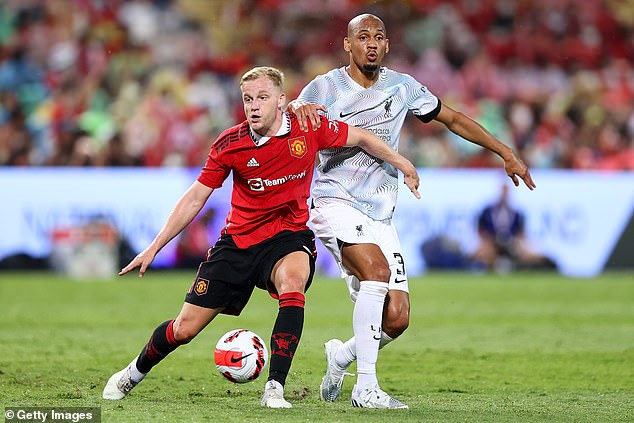 The former Feyenoord defender got on in the second half to make his debut. United were largely penned back after the break so he did not get to show his attacking flair, but he held his own against Salah.

A player who divides opinion but he was excellent here. Made a couple of well-timed interceptions and then started the move that led to Pellistri’s goal.

A disciplined display in the middle of the park, and he may fancy his chances of getting more minutes on the pitch this season.

Looked like a major challenge for him when Klopp brought on Thiago and Fabinho in the last half hour but he stood up well. Worked a neat one-two with Amad before calmly stroking the ball home to get on the scoresheet. 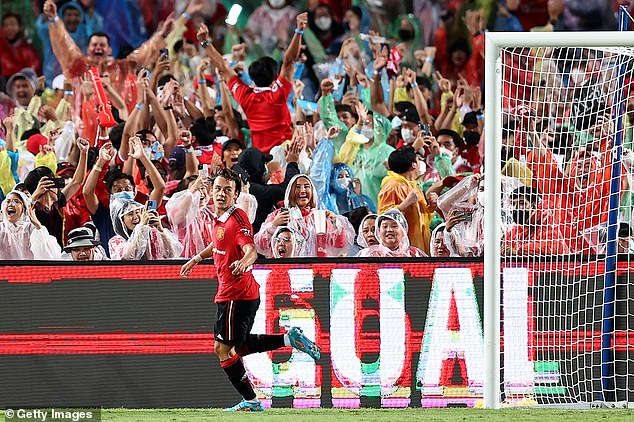 Kept his composure to set up Pellistri’s goal. It would have been easy for him to try to go alone himself, but he picked his head up and made the right choice to find his team-mate.

Unable to make his mark on the game in the second half.

Made one save to deny Nunez a debut goal, although it was one he would have expected to keep out.

A very good start for the Dutchman.

He will have been pleased to see some strong individual displays, and he also got to rotate his squad in the second half.

De Gea looked to be hobbling a little as he came off so this may be a minor concern, but overall an excellent first day at the office for ten Hag.