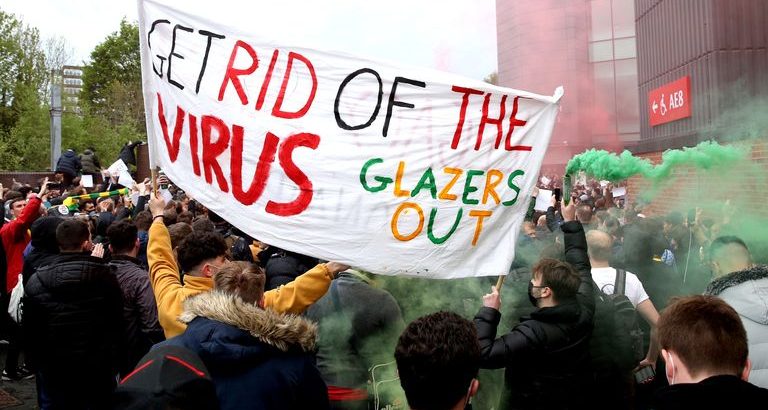 The Manchester United Supporters Trust (MUST) has written an open letter to co-chairman Joel Glazer urging Manchester United’s owners to engage in fan consultation to avoid a repeat of the scenes at Old Trafford on Sunday.

MUST says it does not want to stage further protests, like the one which caused the postponement of the home match with Liverpool, and outlined a way forward with a four-point plan.

Over a thousand fans protested outside of Old Trafford on Sunday, and hundreds broke into the ground and protested on the pitch ahead of the behind-closed-doors contest with Liverpool.

The match was originally meant to kick off at 4.30pm but was initially delayed and then called off completely just over an hour after the scheduled kick-off time. Discussions are taking place around finding a new date for the fixture. The FA is looking into the events.

MUST’s letter read: “Let’s be very clear that no-one wants what happened at Old Trafford yesterday to be a regular event.

“What happened was the culmination of 16 years in which your family’s ownership of the club has driven us into debt and decline, and we have felt ever more sidelined and ignored.

“After 16 years not one member of the Glazer family has ever had so much as a conversation with us, the club’s Supporters’ Trust.

“Yesterday, that frustration reached boiling point. We support the right of fans to protest lawfully and, although we did not personally witness any such acts, of course we do not condone any acts of violence.

“None of us want this to continue. We all have better things to do. So we need to find a way forward.”

The plan asks for engagement in the Government’s fan-led review of football governance, the appointment of independent directors to the board to protect the interests of the football club, work with MUST and supporters on a fan share scheme and consultation with season ticket holders on significant changes at the club.

MUST have asked for a public and written response by Friday.

“This is the only way to move this issue on. We strongly suggest you take it,” concluded the letter.

Neville: Owners to blame for protests

“This is a consequence of the Manchester United owners’ actions two weeks ago. There is a general distrust and dislike of the owners, but they weren’t protesting two or three weeks ago.

“The Glazer family are struggling to meet the financial requirements at this club and the fans are saying that their time is up.

“My view is quite simply that they’re going to make a fortune if they sell the club and if they were to put it up for sale now I think the time would be right, and it would be the honourable thing to do.

“There’s huge discontent, not just across Manchester United fans, but I think for football fans up and down the country and I think they are just saying enough is enough.

“The Glazer family have been resilient and stubborn for many, many years. I think they are struggling to meet the financial demands that this club needs and have done for some time.”