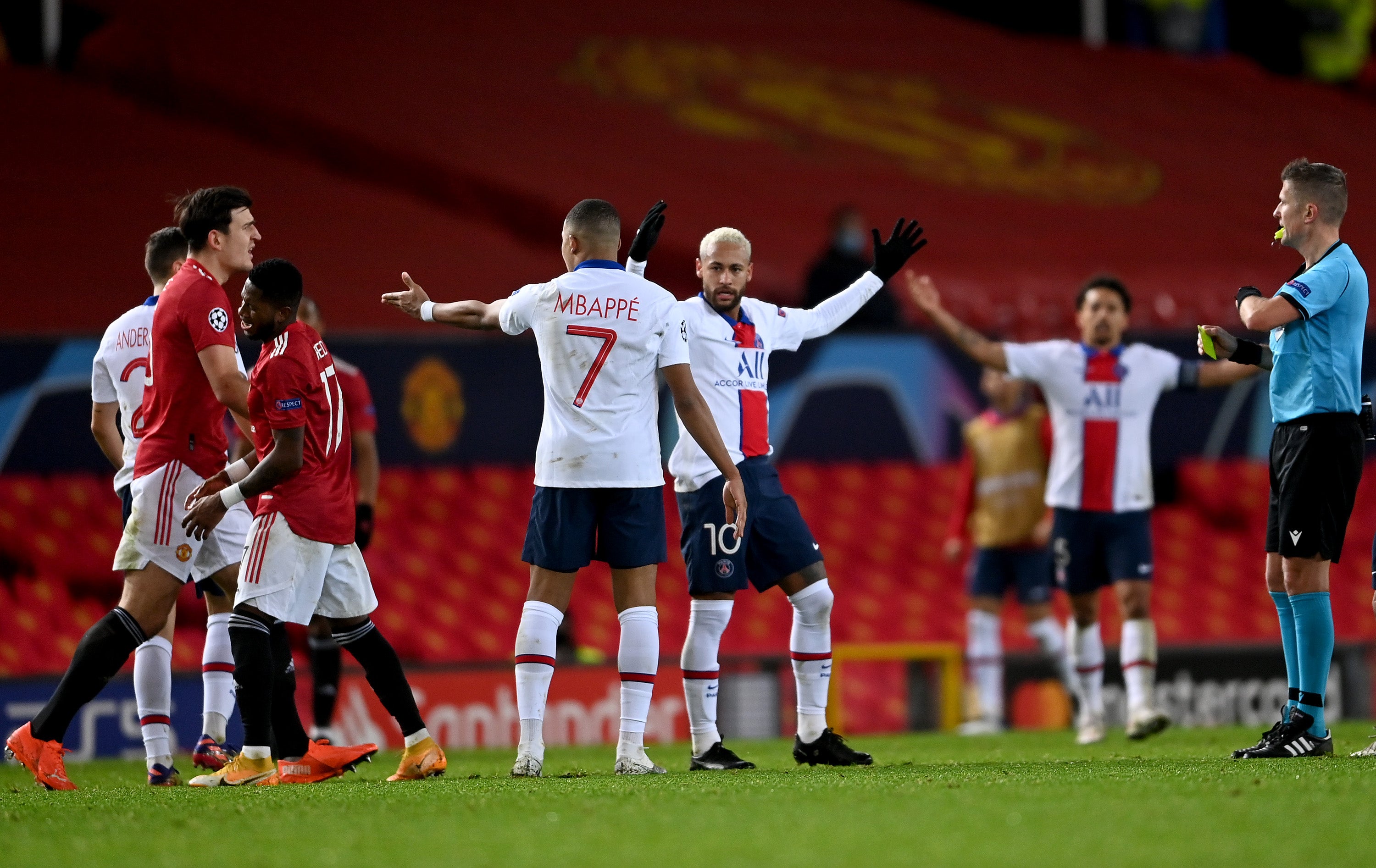 As Bruno Fernandes lay prone, complaining of being struck in the face, Fred entered into an off-the-ball contretemps with Leandro Paredes. Their head-to-head jousting ended with a deft flick from the United midfielder – hardly a Glasgow kiss but clearly enough to constitute a sending-off offence.

It was not a surprise that referee Orsato only briefly glanced at his pitchside monitor – once he found it, having first run over to the wrong end of the pitch – but nobody inside Old Trafford honestly expected him to only produce a yellow card. Even Fred looked slightly sheepish. He had escaped, somehow, and the momentum suddenly shifted.

United proceeded to push Paris into their own half and were level within 10 minutes. Again, they could count themselves a little fortunate. Anthony Martial did well to force Keylor Navas to parry into danger, but the Paris goalkeeper had Rashford’s follow-up covered until Danilo’s deflection, which sent the ball in the opposite direction, into the bottom right-hand corner.

The score level, tempers continued to simmer. Fred might have seen a second yellow for standing on Paredes’ foot, only for the Paris midfielder to be cautioned instead. Scott McTominay grew increasingly weary of Neymar’s histrionics.

With that in mind, you might have expected to see Fred substituted at the break. Instead, he was the first out of the tunnel and Harry Maguire’s calls for yet more aggression were answered. Martial might have been better off showing a cool head when, shortly after the restart, he concluded one rapid United counter by finding space at the far post but blazed over from 10 yards. 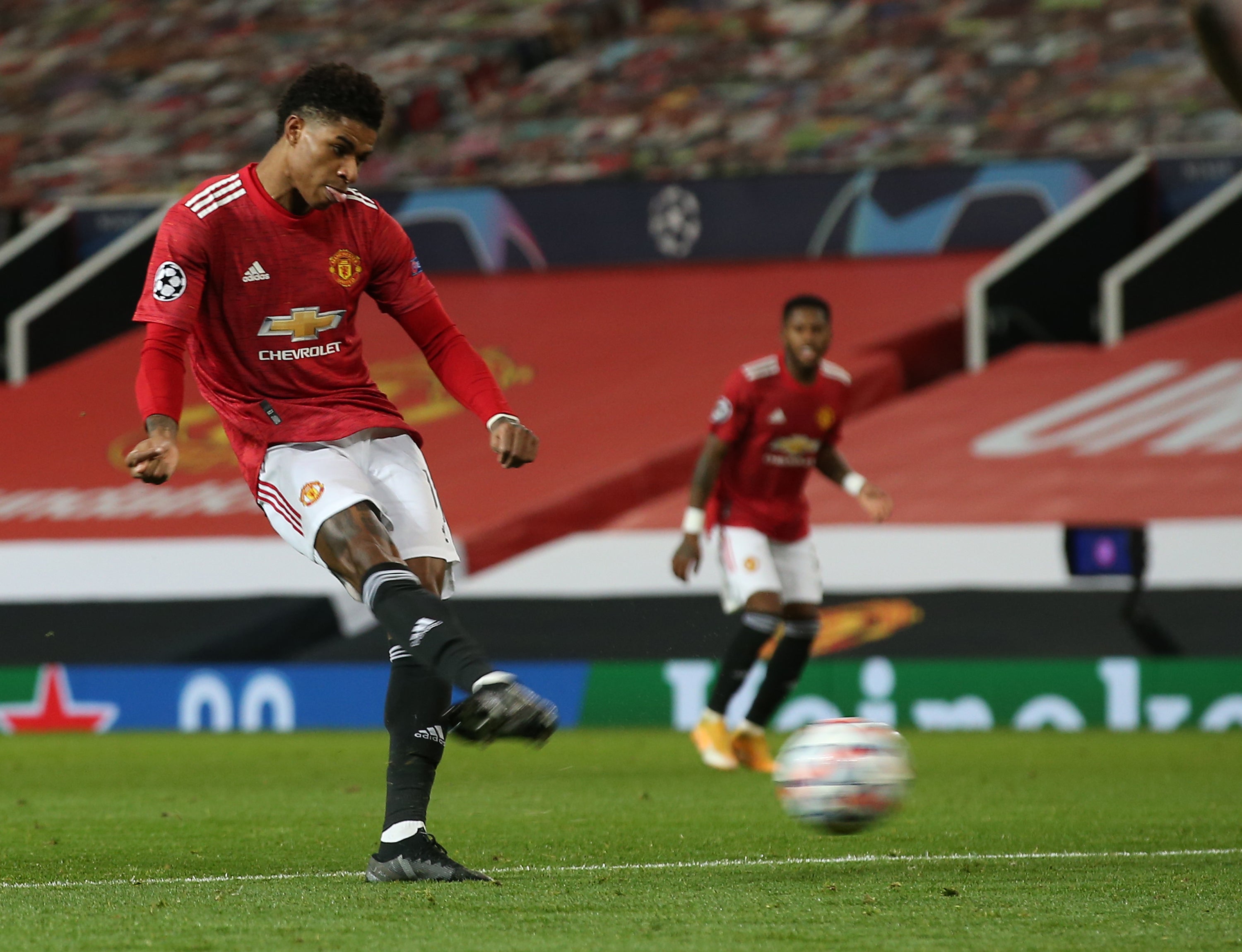 Edinson Cavani has composure but, at 33 years of age, little pace. That was why he attempted to chip Navas from outside the penalty area when sent through one-on-one, as Paris defenders closed in. The Uruguayan – Paris’ all-time leading scorer – at least came close, clipping the crossbar, and Martial’s follow-up was blocked.

United were creating chances on the break, but the contest was on a knife’s edge. At any moment, Paris’ patient possession could produce a breakthrough. It came from a corner, when United old boy Ander Herrera’s wayward shot was diverted back into the penalty area by Abdou Diallo. Solskjaer’s defence was slow to come out and Marquinhos hung around. At point-blank range, once he finally brought the ball out of his feet, all he needed to do was tap it past the scrambling De Gea.

Merely a minute later there came the most predictable moment of an otherwise volatile contest. Fred’s challenge on Herrera was the least offensive of all the fouls he committed but his foot undoubtedly clipped his former team-mate. He hung around on the touchline for a while to protest his innocence, but on the balance of the whole evening, he could have few complaints.

That hindered 10-man United’s attempts to fight their way back into the contest and their efforts to defend one late Paris attack. It was their turn to be caught on the counter, as one flowing transition from defence to attack ended with Rafael drawing De Gea out and squaring for Neymar to guide the ball into an empty net.

That goal could prove crucial if United and Paris are drawn into a head-to-head, but the task remains simple: avoid defeat in Leipzig and they qualify. United’s destiny is still in their hands, but their grip on a place in the last 16 is slipping.