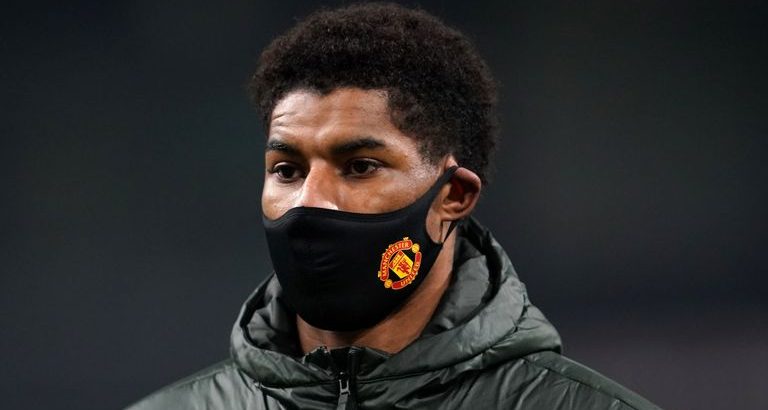 Marcus Rashford has been recognised by the Football Writers’ Association for his achievements on and off the pitch, as the latest recipient of their Tribute Award, but he insists his work in improving children’s lives is far from over.

The Manchester United forward has again stepped up to make himself heard this week, revealing prime minister Boris Johnson called him and confirmed a “full review” is taking place after Rashford shared several images of food parcels sent to parents. As a result of another Rashford intervention, the prime minister has claimed he will correct the “unacceptable” free school meals hampers being delivered.

Rashford successfully campaigned for families eligible for free school meals to have the option of food parcels or vouchers while schools are shut under national lockdown in England.

And for his incredible efforts with his work to help children in need, as well as his form on the pitch, Rashford has been given the Football Writers’ annual Tribute Award, something the 23-year-old gratefully received, while being adamant about his quest for further change.

“We are at the beginning of a long journey,” Rashford told the FWA. “I am definitely not at the stage of relief yet. There is a lot more that needs to be done and a lot more steps that need to be taken.

“On the positive side, we have started to take a few steps in the right direction but it is about sitting back and being happy with what we have done. It is about what’s next in the chapter of these children.”

Former United manager, Sir Alex Ferguson, who helped nurture Rashford through the ranks at Old Trafford, was full of praise for his former fledgling.

“I would like to congratulate Marcus on his achievement,” Ferguson said. “Knowing him as a kid from a very early age and seeing him develop through the ranks at Manchester United into a truly wonderful person has been wonderful.

“What he has achieved in the last few months is quite astonishing. How he has helped the people in need is a truly amazing achievement.

“He has shown to young people in particular that there is a different way of dealing with life. He has shown great humility, he has shown the courage to do what he did and so this achievement is well deserved and it should be recognised what he has done.”