Matildas goalkeeper Lydia Williams says she might well have become an AFLW star had she remained in her outback Western Australian hometown of Kalgoorlie, so dominant was the footy code in the area's sporting culture, especially amongst Indigenous youngsters.

Williams herself is Indigenous – her father is of Aboriginal descent, her mother from the USA – and it was only the fact that the family shifted to Canberra when she was 11 that she was exposed to soccer.

And her experience, she says, is why Football Federation Australia and the A-League clubs should put more effort and investment into trying to attract Indigenous girls and boys to the global game in the face of overwhelming cultural dominance by Australian Rules. 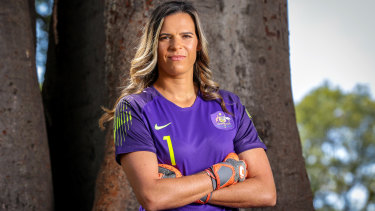 That is even more the case now that AFLW is growing in influence.

''I am happy to say I am a footballer not an AFLW player, I couldn't have gone to World Cups, so I definitely chose the right sport," Williams said.

''But if that was presented in these rural communities (where she lived) I definitely would have been an AFLW player.''

Soccer is making some investment, but more is needed.

''To do welcome to country and have that recognition is amazing. The fact that clubs are starting to do that now is incredible. We just need to get it into a national curriculum.

''Hopefully down the track we will have a jersey. Every other sport has a jersey that celebrates Indigenous round so that would be really exciting if it got to that.''

She believes that Indigenous players can bring something unique to soccer.

''A lot of Indigenous players have that X factor that you can't really teach or coach, and the love for sport comes out in different ways. I think football is losing that race a little bit. ''

It needs to be long-standing commitment. Just running the odd coaching clinic or recruitment drive will not work, she says.

''It's creating relationships. You can't just go out there and say come and trial here.

''You have to put in the time and effort. That's something that is beginning and a couple of years down the track you will see the fruit of that.

''We were growing up in outback WA, I didn't know anything about football, it was all footy. West Coast Eagles came out to my town a lot and I got to be around a lot of AFL and it wasn't until I moved to Canberra where there was no AFL that I actually started playing football.

''It's just about creating programmes in Indigenous areas, it's about getting that exposure to the game.

"It's got so much potential, you get to travel the world, you get to go to different places that AFL and rugby don't tend to do. If you get more Indigenous footballers it would be something really remarkable.''

Williams has certainly grabbed her chances. She has played in Australia, the USA and Sweden at club level, and has represented her country 86 times, including at the last Women's World Cup in France in 2019.