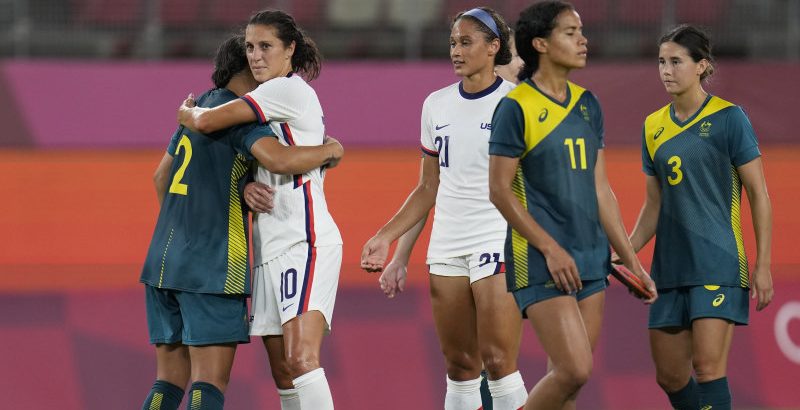 The Matildas saved their best performance of the Olympic football group phase for last, staring down world champions the United States and giving as good as they got in a scoreless draw at Kashima Stadium.

In the other match in this pool, Sweden beat New Zealand 2-0, ensuring they finished top of the group with three wins from three games. 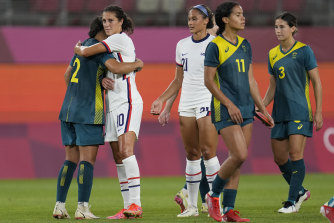 All tied: The Matildas and Americans settled for a 0-0 draw.Credit:AP

The US and Australia both ended up with four points from a win, a draw and a loss, but the Americans, with a better goal difference courtesy of their heavy victory over New Zealand, finished second with the Matildas third.

The Australians were long shots to win this game, but they certainly did not begin as though they were no-hopers.

Matildas coach Tony Gustavsson knows the Americans well, having been the assistant coach when they won the last Women’s World Cup in 2019, so he was guaranteed to have a firm handle on their strengths and weaknesses.

Attack is the best form of defence, and that was the approach Australia took from the outset.

Young striker Mary Fowler was a late change to the starting line-up after Caitlin Foord withdrew shortly before kick-off, having sustained an injury in the warm-up. Chloe Logarzo, who had not been involved at all in the earlier games, came into midfield.

Alanna Kennedy, the vastly experienced central defender came in at the back to play alongside Clare Polkinghorne, Gustavsson switching to a back four to blunt the American strike force of Megan Rapinoe and Alex Morgan.

But they had an early warning about how vulnerable they might be on the break, when Morgan was released through a long ball, outpaced Tameka Yallop and got a shot away that Teagan Micah was able to save comfortably.

Australia’s centre-backs are tall and physically commanding but not the quickest, so full-backs Steph Catley and Ellie Carpenter had to be alert to provide cover

It was Fowler who came closest to breaking the deadlock early, hitting the bar as the Matildas pushed forward.

However, they did have a scare half an hour in when Morgan’s headed goal was disallowed for offside after Australia pushed out to defend a cross from the right.

The US were not creating many chances save for the two Morgan efforts while the Matildas, hustling up front and creating problems from set-pieces, looked dangerous themselves when they went into attack.

Catley asked numerous questions of the US defence with well-flighted deliveries from set-pieces that frequently left the Americans flustered and happy to hack the ball to safety.

The Matildas continued in similar vein after the restart and Fowler, making her first start in a major tournament at the age of 18, went close with a shot into the side netting after linking well with Kerr.

But Micah had to be alert moments later to save at the other end after Christen Press accelerated past Carpenter and got a shot off.

Rapinoe is a celebrated figure in world sport, but contributed little in this game except for getting booked in the first half for a foul on Micah.

Tierna Davidson’s second-half free kick found Lindsay Horan in space but the American forward could not get her header on target and it flew wide of Micah’s goal.

But both sides looked to be content with a point apiece, and in the last 15 minutes neither side really threatened.