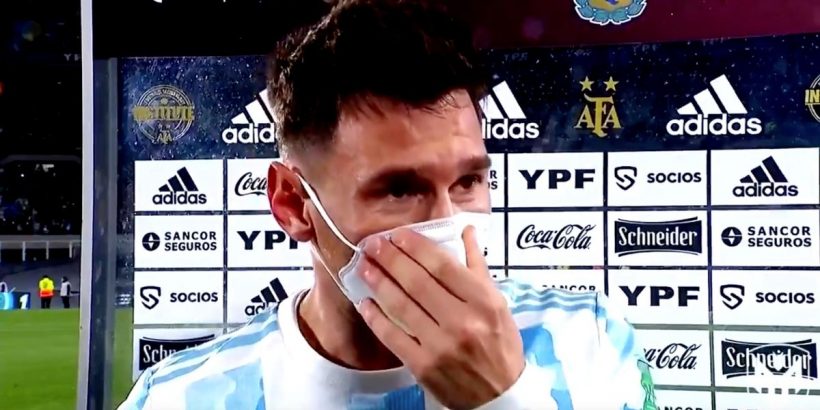 Lionel Messi was unable to control his emotions during a memorable night, as he lifted the Copa America trophy in front of Argentina fans for the first time.

Messi finally achieved international success after years of heartbreak, but was finally able to celebrate in front of adoring fans on Thursday.

The trophy was lifted following their 3-0 World Cup qualifying victory over Bolivia on Thursday night, and Messi scored all three, breaking another record in doing so.

Messi broke Pele's record for most goals as a South American in international football, as he surpassed the Brazilian's record of 77, and reached 79 on the night following his hat-trick. It's been an overwhelming summer for Messi, who has experienced the highs and lows in an emotional rollercoaster following his national success and also his exit from FC Barcelona in recent months.

All of those factors, as well as becoming the most prolific South American in front of 21,000 Argentina fans was too much to comprehend for Messi, who was adored online for his raw and humble reactions.

Is Lionel Messi the greatest player of all time? Comment below In a heartwarming interview, Messi said: "There was no better way to celebrate than by being here. My mum is here, my siblings are in the stands. They have suffered so much and they are here celebrating. I am very happy."

Messi has had to wait for international success, falling at the final hurdle on four separate occasions for Argentina, and the Paris Saint Germain forward said that winning the trophy had given him peace of mind.

"I have peace of mind of having achieved the dream that has been denied to me so many times.

"It was like a dream, a spectacular moment. I couldn't believe it had happened. I enjoy watching the images now more than at the time as I was in a daze. I didn't quite understand what was happening."