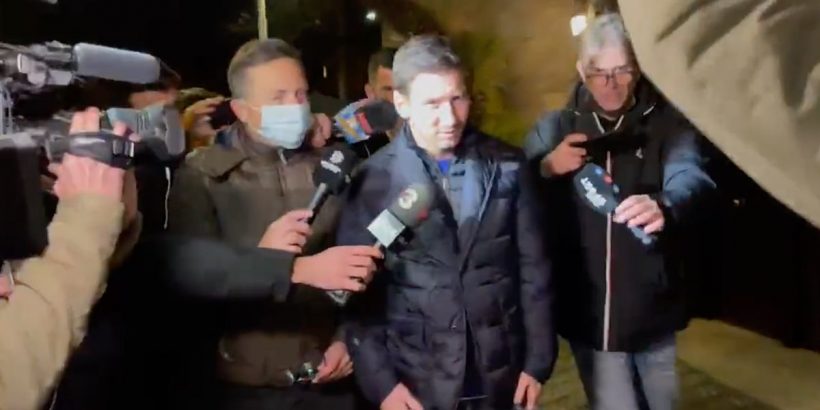 Lionel Messi has made a surprise return to Barcelona after being left out of Argentina’s squad to face Chile and Colombia.

The seven-time Ballon d’Or winner sparked immediate speculation he could be discussing a return to his boyhood club after being spotted in the Catalan capital by fans and local media.

But it later emerged he had flown back to Spain from Paris to celebrate Barcelona boss Xavi Hernandez’s 42nd birthday with ex-teammates Sergio Busquets and Jordi Alba.

They dined together on Monday night along with their wives at a Japanese restaurant. Pepe Costa, Messi’s friend and advisor who left Barcelona when the dad-of-three quit the club at the end of last season to move to Paris-Saint Germain, also joined them.

Messi posed for selfies and signed autographs on Barcelona shirts for fans who were waiting for the Argentinian as he left, but declined to speak to journalists who had also amassed outside the upmarket eaterie.

The footballer’s unexpected return to the home where he has spent most of his career came days after newly-resigned Barcelona right-back Dani Alves made a public plea to Messi to follow in his footsteps by returning to the club to finish his career.

The Brazilian told a Catalan radio station: “'Sometimes things don't happen as we dream. I already told him that he is not going to be in any better place than here.

Do you think Messi can refind his form at PSG? Tell us in the comments section.

“He told me the same when I left. It would be very good if Messi finishes his career here.”

Messi made his comeback for PSG on Sunday after making a full recovery from Covid, coming on as a substitute midway through the second half to replace Neymar.

After the team’s 4-0 victory against Reims he was gifted a Vatican Athletics shirt signed by the Pope.

He received the shirt from Bishop Emmanuel Gobilliard, the Auxiliary Bishop of Lyon. Vatican Athletics is an athletics club described as the Vatician City’s first official sports team.

Messi’s exclusion from the Argentinian squad is said to have been agreed in talks between the PSG striker and manager Lionel Scaloni. The South Americans have already qualified for the 2022 World Cup in Qatar.

The striker’s former Barcelona teammate Luis Suarez admitted late last year his pal was suffering at his new club, saying: ““He told me that when he is playing in the cold, he suffers a lot and with the snow.”

The 34-year-old dad of three spent Christmas and the New Year in his home city of Rosario. He was forced to extend his stay after going down with coronavirus.

Messi and his wife were filmed singing and dancing at a private party where they met famous Argentinian DJ Fer Palacio.

The DJ, who was hired by the footballer for the party, later went to the extraordinary length of posting his negative Covid result online after being blamed for Messi’s Covid.