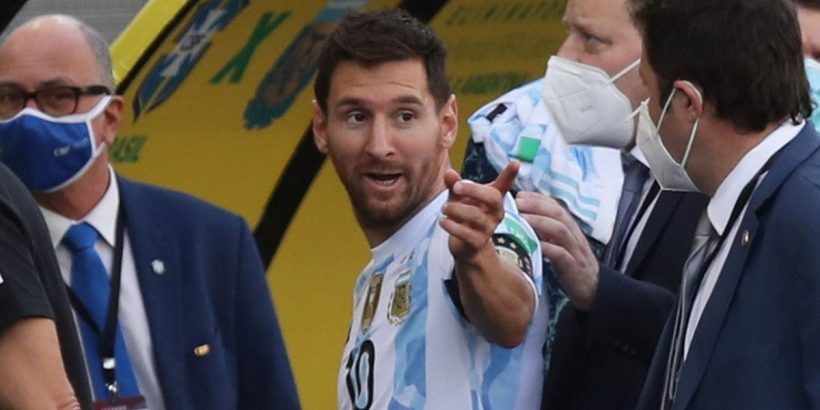 Lionel Messi was left seething when Argentina's World Cup qualifier against Brazil was brought to a halt by public health officials who stormed the pitch to deport four of his team-mates.

To the surprise of everyone inside the Corinthians Arena on Sunday night, Brazilian officials came onto the pitch amid allegations that four Argentina players lied about their travel and quarantine upon arrival in South America earlier this week.

They waited until the game kicked off before deciding to make their move, entering the field just under 10 minutes after it got underway to tell the quartet they are being deported because they breached Covid-19 regulations.

Brazilian travel rules state that any foreign person who has passed through the United Kingdom, South Africa, Northern Ireland or India in the last 14 days is prevented from entering the country.

Brazil's National Health Surveillance Agency claim the players in question declared that they have not passed through any of the four countries with restrictions in the last 14 days."

Do you think the health officials were right to storm the pitch? Let us know in the comments section below.

According to reporter Roberto Rojas, Argentina captain Messi could be heard reacting furiously when the officials stormed the pitch.

It is believed Messi asked them: “We’ve been here for three days, why are you doing this just now?!”

Martinez, Lo Celso and Romero all started the game, while Buendia was left on the bench.

Brazilian officials were informed that the quarter arrived in the country on a flight from Caracas, the capital of Venezuela.

However, that information was soon confirmed to be false, meaning the health authority informed Brazilian federal police.

The players were therefore urged to undergo a quarantine period of leave the country, an ultimatum they did not comply with.

CONMEBOL, the South American Football Federation, reportedly told Brazil that if they didn't allow the Premier-League based stars to play they would face a points deduction.