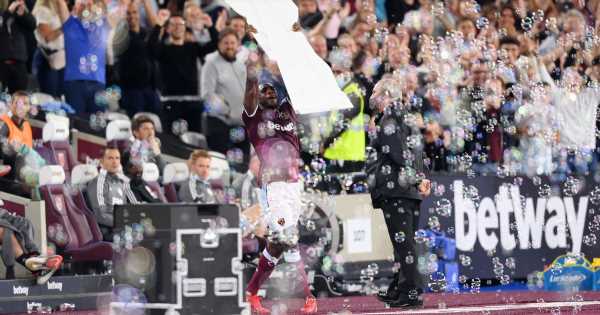 The West Ham no.9 then ran over to the touchline and celebrated with a cardboard cutout of himself in front of a packed London Stadium.

Di Canio originally held the West Ham record with 47 goals, and Antonio matched this total against Newcastle in their Premier League opener.

However, Antonio didn't only break this against Leicester on Monday night, he added another before the final whistle as West Ham defeated Brendan Rodgers' side 4-1 to continue their 100% record to start their Premier League season.

The cutout was planted at the side of the pitch, and made for a memorable celebration which will not be forgotten by the West Ham faithful anytime soon.

It was a life-sized cutout that was paraded around the touchline with a flurry of bubbles, on a near perfect night for David Moyes' side.

Antonio grabbed his goal just 10 minutes from time, as he restored West Ham's two-goal advantage after Youri Tielemans pulled one back for the visitors, and made sure of the victory just four minutes later.

Could Michail Antonio potentially challenge for the golden boot this season? Comment below

Pablo Fornals took the lead for West Ham early in the first half before Ayoze Perez was sent off for a horror challenge on the Spaniard.

Said Benrahma doubled the hosts lead after the break, after Caglar Soyuncu made a calamitous back-pass, and Antonio put it on a plate for the Algerian.

Antonio got his moment as he brilliantly rolled away from Soyuncu, and fired his effort low past Kasper Schmeichel to break the record in front of the home crowd.