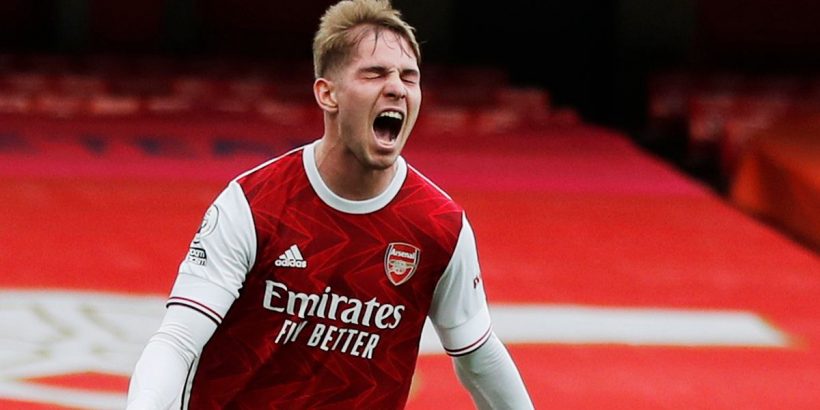 Mikel Arteta could reportedly hand Emile Smith Rowe the vacant no. 10 shirt at Arsenal in a bid to make him stay for the long-term.

The iconic shirt number is now available after Mesut Ozil left the Gunners in January.

Smith Rowe has worn no. 32 since moving up to the first team, but having become an important player for Arteta, he could be set for an upgrade.

According to ESPN, there are a number of players who are keen to switch shirt numbers to 10.

One of those is young playmaker Smith Rowe, with Arteta ready to hand him the highly important number as part of his contract negotiations. Another of those is French striker Alexandre Lacazette, who has occupied the no. 9 joining the Gunners in 2017, but wore no. 10 while at Lyon.

Club captain Pierre-Emerick Aubameyang is also said to be interested in ditching the no. 14 shirt for no. 10, although he may also take no. 9 if it’s handed to Lacazette, having previously stated his ideal choices are seven and nine.

Bukayo Saka was handed the no. 7 shirt last season, so that is seemingly off the table.

Finally, former Chelsea winger Willian was given the no. 12 shirt, but wore 10 during his time in west London, so would no doubt enjoy that change.

Meanwhile, Brazil defender David Luiz is set to leave the Gunners on a free transfer this summer after 'rejecting' final talks with the club ahead of the expiration of his contract in July.

The 34-year-old has played a key role under Arteta since the Spaniard replaced Unai Emery, but might've now played for the club for the final time with his current deal nearly up.

It has been reported that the central defender has informed Arsenal of his desire to find a new challenge, despite them being keen to extend his stay.

The Mail reported on Friday that Luiz, who cost the club £8million in a surprise move from London neighbours Chelsea, rejected final attempts to add an extension to his deal.