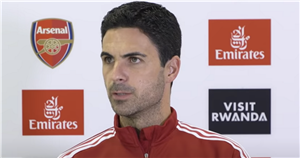 Paranoid Mikel Arteta has lashed out at the mystery critics he claims are trying to “bury” Arsenal.

Even Rwandan president Paul Kagame, a Gunners fan, waded in after last week’s 2-0 defeat to Brentford, which sparked a chorus of criticism.

His government sponsors the club, whose players wear a “Visit Rwanda” logo on their shirt sleeves.

And Kagame angrily tweeted that “we must NOT excuse or accept mediocrity” after the loss to the Bees.

In two further rapid-fire tweets, he insisted that "fans don't deserve to kind of get used to this” and demanded "a plan that really works.”

Arteta claimed he was unaware of the tweets, and that Kagame has not been in touch.

But ahead of Sunday’s big clash with Chelsea, the Arsenal boss said: “I agree that Arsenal should not accept mediocrity. I totally agree.

“I just want people that are constructive around me. I know that people have the intention to bury us and try to criticise us.

“I am talking about using moments to try to come and using some very disrespectful ways to describe certain things. Nothing new.

Do you think Mikel Arteta is the right man to take Arsenal forward? Let us know in the comments section below.

“But we are not interested in that. We have a lot of positivity and a lot of energy, new energy that is coming up.

“My full focus is on that and finding a way to beat Chelsea because we can, because we've done it. I like to always be positive.”

Arteta, who clinched the £30m signing of Martin Odegaard from Real Madrid on Friday, also appealed for fans to stick with his players against Chelsea.

He said: “In moments when there is certain negativity around the place, you need your fans and your supporters more than ever.

“They've always been with the team and I have no doubt that on Sunday they're going to be right behind the team.

“If there is one thing that the team needs, it's exactly that. If they really want to help the team, there's not going to be a better medicine for them than to feel the fans very close with the right energy and supporting them.”

Arsenal have spent £140m this window after following up the signing of Odegaard by bringing in Aaron Ramsdale from Sheffield United.

But Arteta refused to say whether he believes the Gunners have had a better window than Chelsea, who signed Romelu Lukaku for £97.5m.

He said: “We have done what we needed to do. I don’t know what they wanted to do so it is difficult to compare.

“We're going to have seven players that have left the club and five that are coming in, so we are not bringing in more players than we already have.

“It's already a big turnaround and we're going to try and do it in the right way, so this club is stable.

“It is a clear indicator, the business that we are doing. The ages are between 21 and 23-years-old and it tells you the project that we are building.”