They’ve got a grand final to win first, but a showdown with Aaron Mooy is looming for Sydney FC after the Socceroos star's shock move from the Premier League to one of Asia's biggest clubs.

Mooy has signed a three-year deal with Shanghai SIPG, who have reportedly triggered a £4 million ($6.46 million) buyout clause specifically for Chinese clubs in his contract with Brighton & Hove Albion. 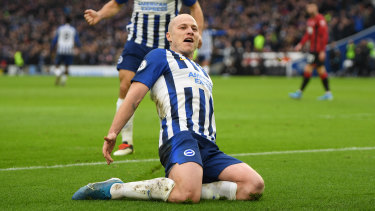 Aaron Mooy’s transfer from the Premier League to Chinese club Shanghai SIPG was one that few in the Australian game saw coming.Credit:Getty

It was a transfer few within Australian football saw coming and the reception has been decidedly mixed – some fans are unhappy the 29-year-old has stepped away from Europe in the prime of his career, while others are content for him to maximise his earning capacity given the limited lifespan of a football career and the uncertainty wrought by the COVID-19 pandemic.

The move is also set to pit one of Australia's top talents against arguably the country's biggest club. Shanghai SIPG is in the same AFC Champions League pool as Sydney FC, and the group stage is currently slated to be wrapped up across two weeks in October in a hub – most likely in Malaysia.

Mooy's former international teammate, Sky Blues skipper Alex Wilkinson, had a brief stint in China with Jiangsu Sainty (now Jiangsu Suning) in 2011 and does not expect playing there will diminish his impact for the Socceroos ahead of a packed calendar of World Cup qualifiers next year.

"He's obviously looking for a new challenge. China will bring that," Wilkinson said on Saturday. "Shanghai's a fantastic team, they've got a lot of great players – Hulk, Oscar, [Marko] Arnautović is there now as well. It's a great city to live in, a great team. Good on him. 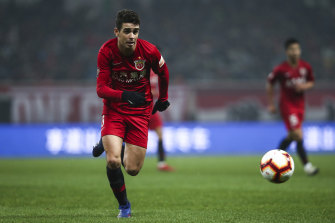 "It's a three-year deal, he'll still be playing regularly and I don't think it will affect his Socceroos performances as well. Everyone needs to respect his decision and I'm sure he hasn't made it lightly."

According to The Athletic, Mooy will earn $4.85 million per season with Shanghai SIPG, with the shift ending his four-season stint in England, where he played initially for Huddersfield Town before joining fellow Socceroo Mathew Ryan at Brighton on loan and then permanently last season.

If the AFC Champions League continues, Sydney FC could face Mooy twice in quick succession, as they are yet to meet Shanghai SIPG in Group H after notching a loss and a draw against Ange Postecoglou’s Yokohama F. Marinos and Korean powerhouse Jeonbuk Hyundai Motors earlier this year.

"When and if it gets played, who knows? He's just going to add strength to them, obviously," Wilkinson said.

"He's a fantastic player, great passer of the ball, great finisher, great creator. It might make our job a little bit tougher when we come up against them."

Meanwhile, Sydney are likely to take in a settled XI into Sunday's grand final against Mooy's old club, Melbourne City.

Defender Michael Zullo trained with the squad on Saturday but it appears the best he could hope for is a stint off the bench, with coach Steve Corica declaring his full confidence in young left-back Joel King's ability to handle the pressure in what will be his first A-League decider.

"He's taken the spot, really. Zullo's been out for most of the season, Joel's played all the season and I've got great belief in him. He's done an amazing job, he's grown through the year as well, he's got better and better. It's his spot now," Corica said.