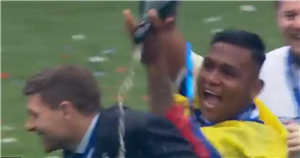 Alfredo Morelos had a surprise in store for Steven Gerrard after Rangers’ trophy lift – drenching his manager in champagne.

The Gers were confirmed as Scottish Premiership champions back in March but had to wait until after Saturday’s 4-0 win over Aberdeen to get their hands on the trophy.

By avoiding defeat against the Dons, Rangers also completed an entire season without defeat, leading some to draw comparisons with Arsenal’s invincibles from 2003-04.

Gerrard and his players celebrated in style after the match, with Morelos leading the festivities.

The Colombian striker crept up behind the Ibrox chief before tipping champagne over his head and his suit.

Gerrard, who was tasting his first title success as a player or a manager, couldn’t hide his delight after leading Rangers to their first championship since 2011.

He continued: “It feels good. It’s been a while since I had the smell of champagne. I think everyone knows what it smells like but because it’s been so long, I’m actually enjoying it.”

Rangers and Gerrard won the Scottish Premiership title at a canter, finishing 25 points ahead of Celtic in the final standings.

And Gerrard gave assurances about his future after the match, insisting that his work north of the border isn’t done just yet.

“I came up here with my eyes wide open to learn about the club”, he added.

“I had a good idea from the outside, but this has grabbed me, it’s gripped me. It’s a club like very few in the world.

“It has a lot of similarities to Liverpool and this has got a special place in my heart. I’m happy here.

“I have to make a lot of sacrifices family-wise, but I want more. This has given me a taste for more and I’m more determined to build on it.”