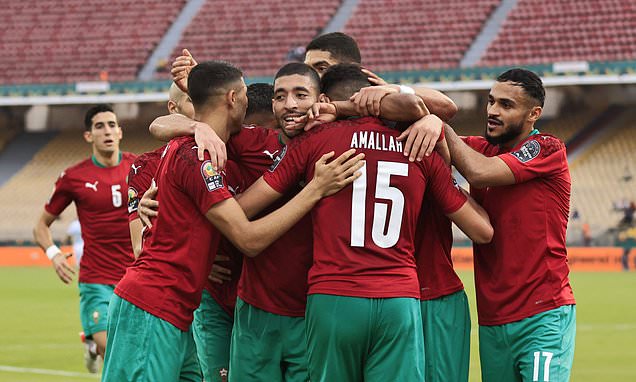 Morocco book their place in AFCON knockout stages with 2-0 victory over Comoros thanks to Selim Amallah’s opener and Zakaria Aboukhlal’s late strike, despite squandering chances

Morocco proved too strong for the Comoros Islands at the Africa Cup of Nations on Friday, winning 2-0 to stay top of Group C and ensure progress to the last 16 of the finals in Cameroon.

Selim Amallah scored after 16 minutes and Zakaria Aboukhlal struck on the final whistle to ensure the win, after Youssef En-Nesyri had a penalty saved.

The score should have been significantly more one-sided had Morocco taken all their chances as they overwhelmed the tournament debutants at the Ahmadou Ahidjo Stadium.

Morocco now have six points while Comoros have yet to open their account. Gabon and Ghana play their second Group C match at the same stadium later on Friday. 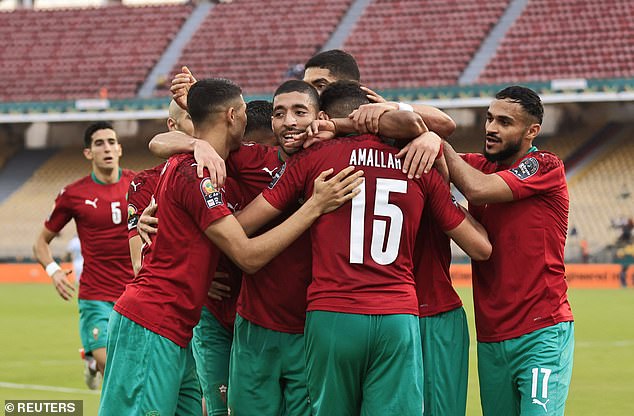 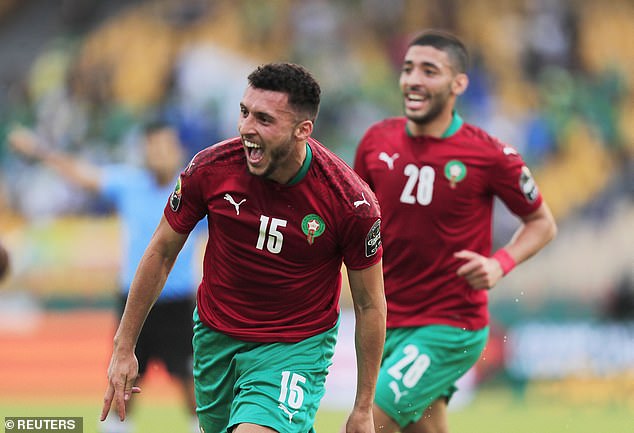 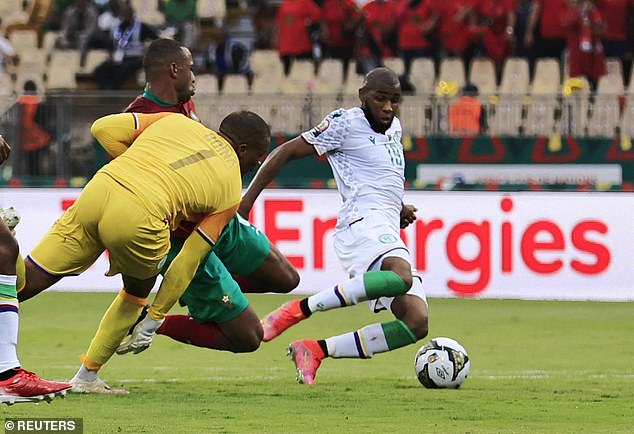 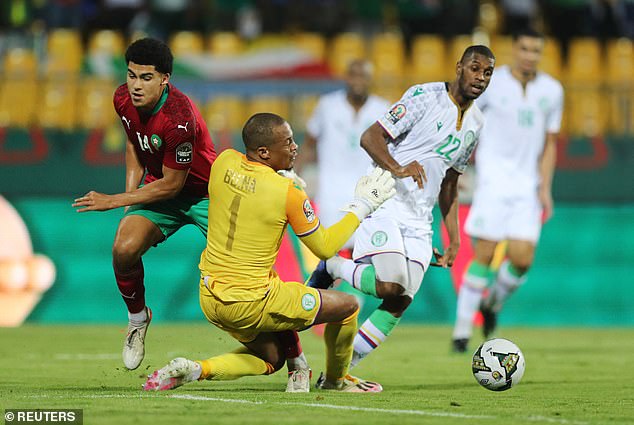 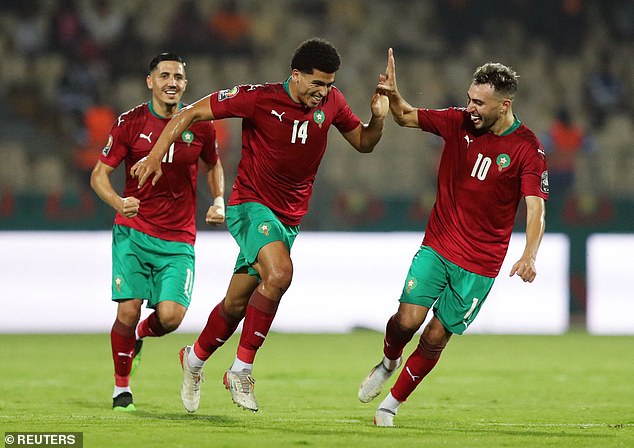 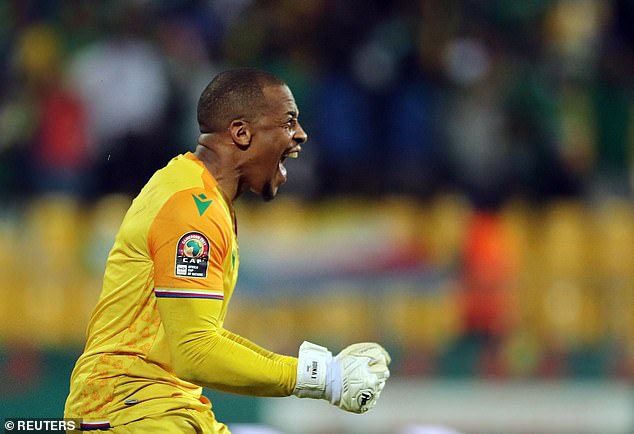 Relive all the action as it happened with Sportsmail’s live blog below.

Zakaria Aboukhlal’s late, late goal secures the victory for Morocco after they squandered a barrel of chances.

Comoros fought until the end and looked like they could have edges their way back in but ultimately Morocco dominated with wave after wave of attack.

Zakaria Aboukhlal finally slides the ball past Ben Boina. It’s in but he could have been off…

It’s  disallowed after the flag goes up but after a lengthy VAR check it stands.

Fayçal Fajr gets a toe to it ahead of Ben Boina and as they collide the referee has little choice but to point to the spot.

But the Comoros keeper redeems himself as he saved En-Nesyri’s spotkick.

It was an awful penalty from the Moroccan.

Poor communication at the back from Comoros sees Morocco gain possession in a dangerous place.

Amallah has plenty of goal to aim at from the edge of the box but fires wide of the near post.

If Morocco don’t walk away with all three points they’ll only have themselves to blame.

A long lofty ball is floated into the box for Morocco.

Cute idea but easily scooped up by Ben Boina

A triple change for Morocco as they try to put this one to bed. Most notable is the arrival of Sevilla striker Youssef En-Nesyri who has been struggling with an injury coming into the tournament.

Another chance goes begging for Morocco.

It’s El Kaabi with the diving header six yards out this time but it comes off the top of his head and flies well wide of the far corner.

Morocco have a free kick just outside the ball. It’s well struck by Boufal – as Selemani can testify.

Good block in fairness but he’s going to have felt that.

And it’s Morocco who have come straight back out on the front foot. Comoros can barely break out of their own half.

And we’re back underway!

Morocco are ahead heading into the break thanks to Selim Amallah but since then it has been a story of Moroccan regret as chances go begging.

They had probably the best chance of the game on the brink of half time as Tissoudali found himself in on goal.

He opened up as if to bend into the far corner but then spotted El Kaabi waiting for a tap-in. He looked to be in two mind and in the end picked neither option and put it well wide.

El Kaabi is through again. He had the chance to take it early but doesn’t look confident and Mohamed Youssouf gets back for some great defensive work.

Morocco have certainly  had chances to put away. Another let off for Comoros.

Edge of your seat stuff there.

Morocco have the chance to double their lead but Aguerd’s header rattles the woodwork.

Perhaps if it had bounced a little kinder, it would have been in.

A lovely ball from Morocco is played in behind Comoros backline but a defender is there just in time to get a toe to it and send it our for a corner.

But the theme of the evening seems to be anti-climatic Hakimi corner kicks as it’s a poor delivery once again.

It could be a long afternoon for Comoros now as Morocco dominate.

The island nation desperately need to hold on to possession as it become clear Morocco can slice through the opposition if they get the ball in between the two banks of midfield and defence.

Morocco are almost in again but Ben Boina is out fast enough to sweep up… just.

The ball pinballs around the box as heroic defending denies Morocco one, two, three efforts.

But the ball finally falls to Selim Amallah who squeezes it home to seal the lead. A huge blow for Comoros who had been handling the early pressure well to grow into the game.

Vital lead for Morocco who know a win secures passage to the knockouts.

Hakimi has to divert a dangerous cross behind for a corner but Faïz Selemani goes across to take it and hooks it miles over everyone and out for a goal-kick.

He gives a little wry grin in apology. Criminal delivery.

Comoros have another free kick but the delivery is not up the standard of the previous one and doesn’t beat the first man.

Morocco easily deal with it and clear it away.

It’s the latest of late flags.

El Kaabi breaks down the right and lays into the middle for Tissoudali. But he is clumsily fouled from behind by Comoros defender Mohamed Youssouf.

The flag then goes up for offside for El Kaabi but should have gone up way earlier. If it hadn;t we could have been looking at a very early Morocco penalty.

Comoros then have a free kick which is delivered beautifully into the box. But they can’t get enough on it on the receiving end and it goes out for a goal kick.

Morocco are showing their intent early on. They’ve played a few long balls forward and seem prepared to keep attacking in the Comoros half.

Morocco get us underway!

It’s a lively atmosphere in the stadium. The crowds aren’t huge but they’re more than making up for it in volume. 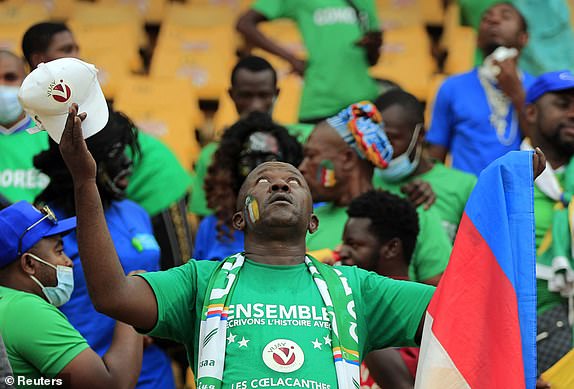 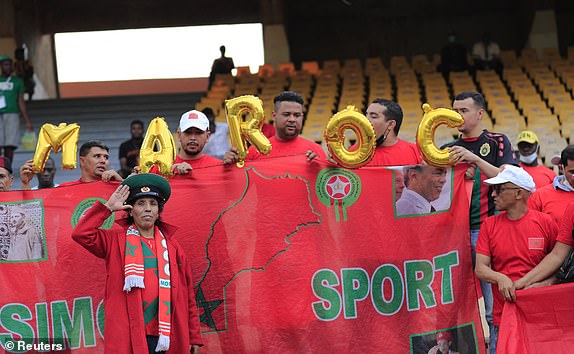 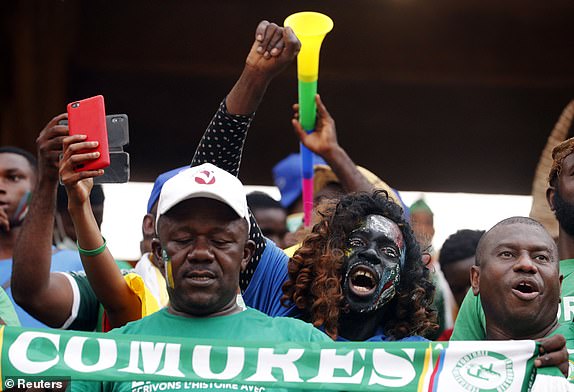 Here’s your five minute warning until we kick off in the Cameroon capital.

The teams are out and it’s anthem time.

If Morocco can secure a victory they will book their place in the next round – as will Gabon.

Breezing through to the next stage now leaves  them the luxury of being able to rest players in their final group games to head to the knockout stages with fresh legs.

Gabon battle Ghana is the other Group C game at 7pm this evening which will see Arsenal team-mates Pierre-Emerick Aubameyang and Thomas Partey face each other.

It’s fair to say the two Gunners players are having rather different seasons back in the Premier League with Aubameyang exiled from the Emirates but can he redeem himself at AFCON?

Some familiar faces grace the Morocco side today with Watford’s Imran Louza and Wolves’s Romain Saiss controlling the middle of the park, while PSG star Achraf Hakimi will be one to watch.

Sofiane Boufal slots in behind the striker and will be hoping to add to his tally this tournament after scoring in their opener.

Here’s how the two nations line up at the Stade Ahmadou Ahidjo this afternoon.

Morocco are looking to continue their strong AFCON challenge this afternoon. They have won their last 10 games, including all six of their World Cup Qualifying matches.

But can Comoros cause an upset?