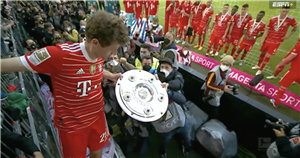 Bayern Munich legend Thomas Muller wanted the fans to be involved in their trophy celebrations, and climbed the railings at the Allianz Arena to hand over the Meisterschale.

The Bavarian giants have now one the trophy ten times in a row, since Jurgen Klopp's Borussia Dortmund side were the last team to stop them. But with fans back at full capacity after a difficult period, Muller wanted to make sure that the fans got their moment.

Bayern lifted the trophy in front of a full stadium, but Muller quickly climbed the railings to hand it over to the fans. And the supporters took turns lifting the famous plate, all getting their own special moment.

It's well known that football in Germany is very fan led, and it's something that the rest of Europe should take inspiration from. But Muller took that to a whole new level when involving the supporters in their trophy lift.

And the German will be sticking around to make even more memories too, as Bayern announced that his contract had been extended, keeping Muller at the Allianz Arena until the end of the 2023/24 season. The 32-year-old made his debut in 2008, and has been a one-club man ever since.

Muller has won all that there is to win in football, claiming 11 domestic titles, as well as Champions League glory and a World Cup crown with Germany. And he has made over 400 Bundesliga appearances along the way, sparking an incredible partnership with Robert Lewandowski.

But it's been somewhat of an anticlimactic year by Bayern's high standards, as Villarreal stopped their European run prematurely, and they were dumped out of the German cup too. After winning the Champions League in 2020 thanks to a Kingsley Coman goal against PSG, they haven't been as much of a threat.

It was looking like it could be their year, as they matched Liverpool's incredible run in the group stages by winning every single match. But they were stunned in the quarter-finals by Villarreal, who went on to be knocked out by Liverpool in the next round.

Bayern's season may be over, with one more Bundesliga game to play with nothing but pride at stake. But they'll be back for more next season, although there is a growing concern that Lewandowski may be eyeing a move elsewhere.