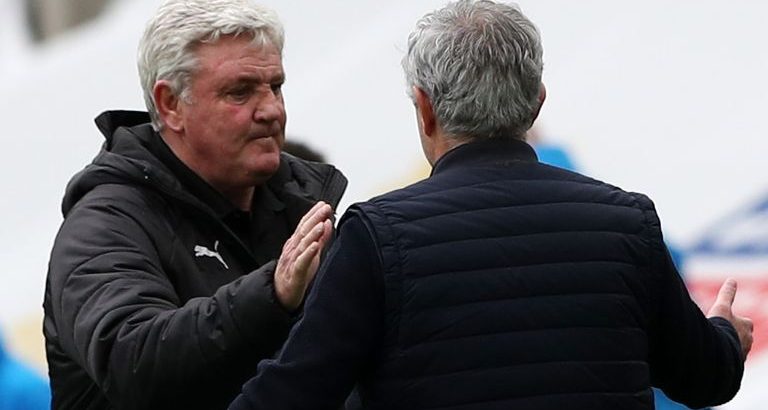 Jose Mourinho described Tottenham’s 2-2 draw against Newcastle as “not a good point” and lamented Spurs’ “instability”, while Steve Bruce believes his side should have taken all three.

Joe Willock’s late equaliser secured a point for Newcastle, with Tottenham just minutes away from going into the top four after Chelsea’s shock defeat to West Brom on Saturday.

A downbeat Mourinho was unhappy with a point from St James’ Park, with Spurs now dropping 15 points from winning positions this season, and described some situations as ‘deja vu’.

He said: “It is not a good point. We should and we can, with the objective to win so I’m not happy with a point. I don’t want to go very deep on my analysis because I feel that what I feel, what I think, what I want to say cannot be with you, it can only be in the dressing room.

“If I analyse the performance separated from so many mistakes that lead to instability and instability leads to hope in the opposition, if I want to analyse it separate from that, I think we were very good in some moments… But I cannot do it. I cannot separate the game from these moments of instability and that’s the reason why we didn’t the game.

“That’s not the point for me in this moment, the point for me is to set up a team that came here with every intention to win and in the end, a little bit of deja vu in some situations. I believe many of these white hairs, they come with things I’m not used to seeing in football matches at this level.”

Bruce: We should have taken all three points

Newcastle manager Steve Bruce believes his side should have won the game, having produced a much-improved performance from their dismal defeat to Brighton two weeks ago.

The pressure was on Bruce and his side to perform, and they responded well to take a vital point as they battle Premier League relegation.

Bruce told Sky Sports: “We’re pleased but, in my opinion, it should have been three points. I thought we were the better side, it’s as good as I’ve seen us play for a long time, especially after the debacle of two weeks ago.

“We’ve done as well as we could have hoped, we’re just disappointed we haven’t won it. But you take a point and move on. There was the performance, which I was really pleased with, considering what’s happened over the last couple of weeks.

“The spirit in the camp and the togetherness is, in my opinion, always going to be there. I alluded to it before the game, we have to it with so much nonsense up here, but after a poor five minutes where we gave the goals away, the response was there for everybody to see. The spirit is never in doubt.

“The performance is what you’re looking for after a such a poor one. We all know we let ourselves down a couple of weeks ago, so to come out here and perform against a very good team in Tottenham, I thought they were excellent. I couldn’t say anything else.

17 – Joe Willock's equaliser was Newcastle's 17th shot from inside the box against Spurs today; their most in a single Premier League game under Steve Bruce. Invited. #NEWTOT pic.twitter.com/oNtcunVw2R

“When they set standards like they have today, it’s important that you stay there. We’re in tomorrow to start work on next week. We’ve got a crucial few weeks and let’s get ready for the challenge because there’s still a lot of football to be played. But if we stay at that level, then I’m still convinced we’ll be OK.”

Bruce also gave an update on the injured Callum Wilson, adding: “He’s eight weeks [out] today so we’re hoping that he joins in training tomorrow. He’s done all the stuff outside and the rehabilitation, now the key thing is can we get him up to speed and that’s always difficult after being out for eight weeks.

“We’ve been quite cruelly struck with the problems we’ve had, again we’ve had six or seven missing today so we hope that improves for us.” Sky Sports pundit Graeme Souness: “Newcastle never gave up. They were a completely different team to two weeks ago at Brighton. The supporters and manager will be heartened by that performance today.

“Spurs have given up 15 points from winning positions. That’s not a Jose trait. That’s worrying. If you want to be a top team you can’t give up leads the way they do.”

Sky Sports features editor Peter Smith: “It was a spirited, ambitious performance from Newcastle – and a fantastic response to that huge setback against Brighton before the international break.

“But from Spurs’ point of view, what a missed opportunity. They were big favourites to win today and, when Kane hit the post with them 2-1 up, they looked on course to move into the Champions League places. But another late Newcastle equaliser has cost Spurs again.

“That’s 15 points dropped from winning positions by Spurs this season. Only Southampton and Brighton have dropped more. A let-off for their rivals Chelsea, who remain fourth despite their shock loss to West Brom yesterday.”

Newcastle are back on Sky Sports next Sunday when they host Burnley in the Premier League; kick-off 12pm. Tottenham will also play on April 11 when they welcome Jose Mourinho’s former side, Manchester United, live on Sky Sports; kick-off 4.30pm.