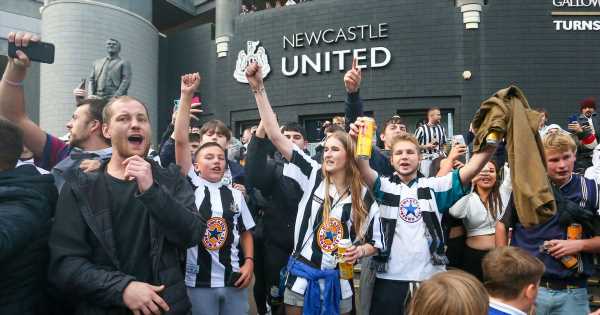 Jonjo Shelvey says he contemplated driving down to St James' Park and having a beer with Newcastle fans when their £300million takeover was announced last week.

The Magpies are now under new ownership after Mike Ashley sold his shares to a consortium led by Saudi Arabia's Crown Prince Mohammed Bin Salman, whose arrival makes them one of the wealthiest clubs in world football.

When the takeover was confirmed last Thursday, ecstatic Toon fans flocked to St James' Park to celebrate; drinking beer, singing chants and letting off flares in their hundreds. And Shelvey, who has spent the last six years at the club, admits he came close to joining the party.

"Those scenes outside the stadium were incredible," the Newcastle midfielder told the Daily Mail.

"I was going to have a drive down, I wanted to get out there with a beer myself!

Do you think Newcastle will qualify for the Champions League under their new owners? Let us know in the comments section below. "That reaction at the stadium is unique. The fans have suffered a lot in the past, so I think what we saw was a release of frustration and relief that the deal had finally happened.

"Credit to the fans, too, because they have helped push this deal through. It gives us all so much to look forward to. "I went to watch Newcastle Blue Star on Friday night, my mate plays in goal. There were about 1,000 fans there, fully-grown men wearing Arab clothes, I couldn’t believe it.

"I got off at half-time because I couldn’t really watch the game in the end, but it was mad. They were so happy."

Newcastle are already being linked with a host of world-class names following Bin Salman's takeover, with reports in Italy claiming Juventus duo Federico Chiesa and Matthijs de Ligt are on their radar.

Steve Bruce is also expected to be replaced as manager in the coming future by an elite-level name such as Antonio Conte, Paulo Fonseca, Frank Lampard or Steven Gerrard.