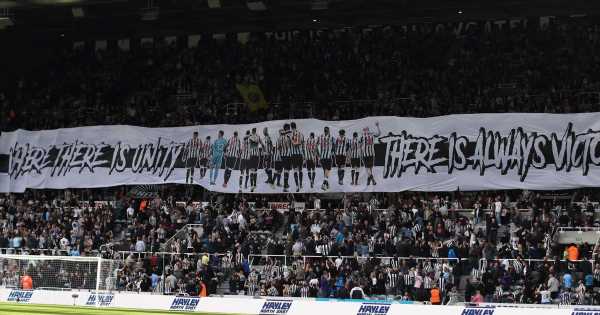 The Newcastle United Supporters Trust have launched an ambitious bid to buy a stake in the Magpies from owner Mike Ashley.

Ashley has been openly looking to sell the Premier League club for some time and came close to agreeing a deal with a Saudi-Arabian-backed consortium in 2020.

And with a sale seemingly imminent, the Supporters Trust is spearheading a drive to secure a vital stake in the future of the club.

The Trust, which has over 14,000 members, is asking Magpies fans to pledge a small amount of money into a fund which aims to purchase a stake in the club when it is eventually sold by Ashley.

The 1892 Pledge – named after the year Newcastle was formed – has been three years in the planning and has already attracted interest from figures in football, media and politics.

Through the Pledge, the Trust aims to create a fund which can provide supporters with a small share of the club when it is sold or allow fans to step in should the club fall into financial trouble.

Greg Tomlinson, Chair of the Newcastle United Supporters Trust said: "For decades, fans have been told they are the lifeblood of the club, but when major decisions are made, they are always left out. “It is an unfortunate fact that in football, as in life, money talks. Therefore, we feel that if we as fans really want to be an active part of conversations that will dictate the future of Newcastle United, we have to put our money where our mouth is.

"Raising funds will give us the financial backing to make our voices properly heard as and when the club is eventually sold."

Alex Hurst, the former Trust chairman who is spearheading the initiative, added: "The 1892 Pledge could mean we, as fans, can invest in our club, that could be in the form of a percentage stake in NUFC if it is sold whilst in the Premier League or, if things take a turn for the worse and the club’s fortunes sink further, we would be there standing ready to provide investment and potentially be part of a buying consortium.

"Supporters must have a say in what happens to NUFC and we believe this campaign will give us a real voice in the running of the club – not just now but for years and decades into the future.”

In the event the Supporters Trust fails in its attempts to purchase a stake in the club when it's sold, all money raised would be donated to local charities in the north east. Hurst continued: "All four of our Guardians are passionate about Newcastle United and its supporters.

"They believe, as we do, that the future success and viability of the club depends on the fans – even more so with the financial problems brought about by the pandemic.

"Before Covid-19 hit, some people were confident that Premier League clubs could essentially survive on TV money, but that has been blown out of the water over the past 12 months.

"The financial situation faced by clubs across the league, not just NUFC, demonstrates just what a vital role fans play.

"We already have power and financial clout. Imagine what we could do with a proper stake in the club."