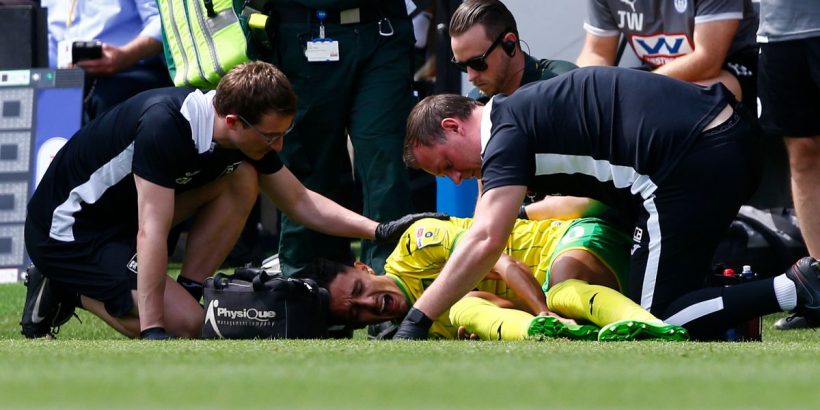 Norwich defender Dimitris Giannoulis was left in agony after suffering a sickening injury during his side's 1-1 draw with Wigan on Saturday.

The Greece international required gas and air as medics rushed in to help him during the Championship clash at Carrow Road.

The horror incident occurred in the second half with Norwich 1-0 down. Giannoulis yelled out in pain, though play continued briefly as the referee hadn't noticed anything.

It took Wigan boss Leam Richardson to scream at the official for play to finally come to a rest so that Giannoulis could receive treatment.

The 26-year-old was left in tears as he was stretchered off the field with his ankle heavily bandaged, and Dean Smith's No 1 left back could now be set for a lengthy spell on the sidelines.

What's the most gruesome injury you've ever seen live at a football match? Let us know in the comments section below.

Earlier, James McClean had fired the League One champions into the lead after just half-an-hour, but the home side pulled themselves level through Max Aarons, just minutes after Giannoulis' gruesome injury.

Neither side managed to nab a winner, despite there being 10 minutes of additional time due to the earlier stoppage.

Norwich, who were relegated from the Premier League last season, have had a tough start back in the second tier of English football, having lost to Cardiff City on the opening weekend of the campaign last week.