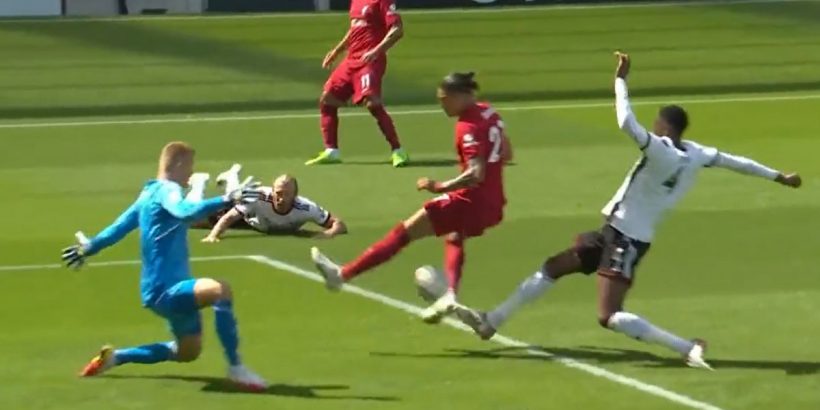 If at first you don't succeed…

Darwin Nunez is officially off the mark for Liverpool in the Premier League, and he's done it in style after converting Mo Salah's near-post cross with a sensational heel flick during the Reds' opening weekend draw with Fulham.

Minutes early, the Uruguayan had attempted an almost identical effort, which was parried by Fulham stopper Marek Rodak, leaving Liverpool fans (quite rightly) salivating over their new superstar striker on social media.

"That is gorgeous play. This is the beautiful game. One touch brilliance I am in awe," tweeted one ecstatic Reds fan.

Even rival were applauding, with a Tottenham supporter tweeting: "Super finish that", while a Chelsea fan said: "Darwin is better than Haaland."

Nunez started on the bench but was introduced after just 50 minutes with Jurgen Klopp's side 1-0 down following Aleksandar Mitrovic's headed opener in the first half.

Will Darwin Nunez score more goals than Mo Salah this season? Let us know what you think in the comments section below.

Mitrovic then put Marco Silva's side back in front just minutes after Nunez's strike after winning and converting a penalty following a clumsy challenge by Virgil van Dijk.

But the Reds' blushes were saved by Salah (who else), who tapped home a scrappy equaliser following a scramble inside Fulham's box with 10 minutes left to play.

Jordan Henderson nearly won it for the visitors after crashing the ball against the bar from 25 yards out in fourth minute of injury time, but in the end the points, appropriately, were shared.