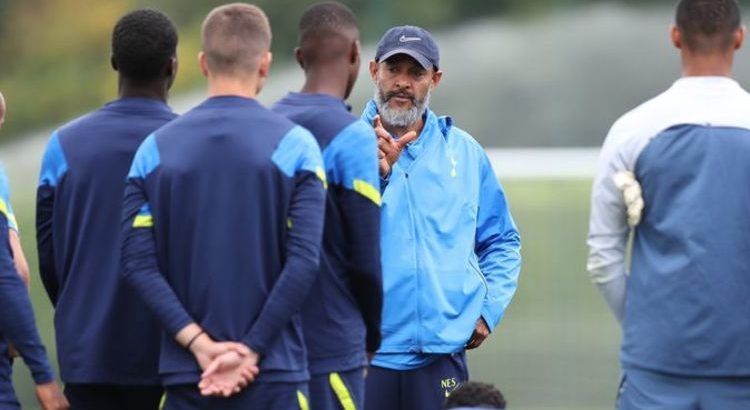 Nuno Espirito Santo has taken little time to stamp his authority at Tottenham as he looks to take the club forward following Jose Mourinho’s disastrous spell in charge. The 47-year-old manager got off to the perfect start to his reign with victory over champions Manchester City last weekend. But that was followed by a disappointing defeat to Portuguese minnows Pacos de Ferreira in the Europa Conference League on Thursday.

This weekend he faces his former side Wolves in what is sure to be an emotional occasion for him on his return to Molineux.

But all the talk ahead of the match will no doubt be dominated by whether or not a certain Harry Kane will be in the squad for the first time since expressing his desire to join Manchester City.

And it will be intriguing to see what Nuno decides to do following his recent telling comments about Kane’s teammate Tanguy Ndombele.

The French midfielder has struggled for regular football since his big-money move from Lyon in 2019, and reports have claimed he wishes to leave the club before the end of the transfer window.

Like Kane, Ndombele has not been included in any squads so far this season.

And when asked about the player earlier this week, Nuno insisted he would not entertain the thought of picking any players whose commitment is not 100% towards Spurs in what seemed to be a thinly-veiled dig towards some members of his team.

Nuno’s message is crystal clear – if you are not fully on board, you will be shown the door.

Yet the intriguing sub-plot amid all this is where that leaves Kane.

There is no question that the England skipper wants to depart, and thus he certainly currently doesn’t have the type of attitude Nuno is looking for.

But it is easier said than done to drop arguably the world’s best striker if he is returning to full fitness.

In this sense, Nuno faces a huge dilemma.

If he selects Kane, he may be seen as being a hypocrite by the rest of the squad given his treatment towards Ndombele.

But if he alienates Kane and Spurs then end up losing, there will be huge question-marks over why he was not picked regardless of his flirtations with City.

All in all it is a potentially season-defining decision for Nuno, and an extremely tricky situation to be in.

And as he attempts to galvanise his squad and replicate the ‘us vs them’ attitude which was so successful at Spurs under Mauricio Pochettino, he will no doubt be thinking very carefully over his next move.

It will also be fascinating to see what kind of reception Kane gets from the travelling supporters at Wolves on Sunday if, indeed, he does feature – the same fans who took great delight in gleefully asking ‘are you watching Harry Kane?’ during the City win.

With so many potential storylines, Wolves vs Spurs is certainly looking unmissable as the Premier League begins to kick into gear.