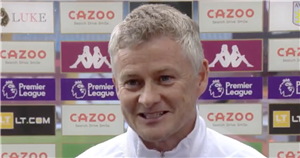 The Red Devils made sure rivals Manchester City did not lift the Premier League title with three games to go as they secured a 3-1 win over Aston Villa.

Forced to come back in the second half, their Uruguayan forward put the finishing touch on the victory with an 87th-minute header.

It was his 15th goal of the season, having arrived from PSG on a one-year deal at 34 years old.

Despite his strong form, there was speculation that Cavani was looking to make a exit to South America.

But Solskjaer has suggest that the forward will actually be staying at Old Trafford in his latest interview.

The manager was asked by Sky Sports whether he was trying to keep the forward at the club following his latest goal.

With a wry smile, the Norwegian says: “His movement, his desire to score goal – we’re getting to learn Edinson.

“Hopefully we can use him more next season.”

When footage of the interview was shared on Twitter, the United faithful believed that Cavani’s signature had been secured for the 2021/22 season.

Another commented: “Ole’s smirk… something special is happening at Manchester United football club!”

While a third added: “Ole’s playing a game with us! I hope he's signed. He's too good to watch.”

It means that the team are now 10 points behind City with a game in hand, playing two games against Leicester and Liverpool in the next four days.

While he played a vital role in securing the Old Trafford side’s place in the Europa League final against Villarreal with four goals over two legs against Roma.