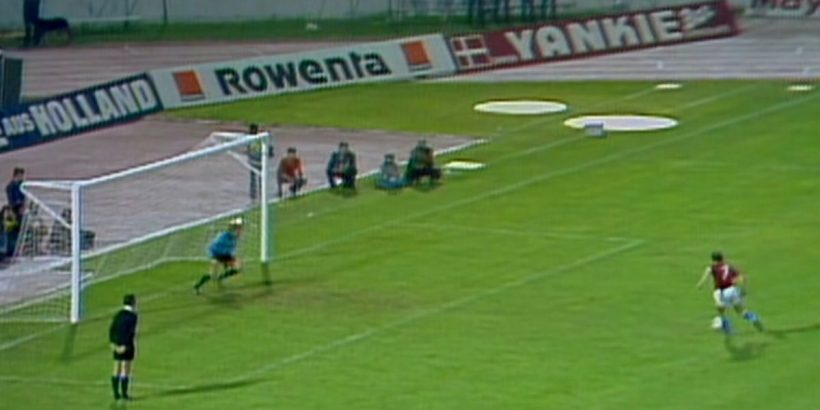 The 'Panenka' is one of the most unique skills in football – a dinked penalty that mostly catches a goalkeeper off guard and makes for a wonderful sight.

It’s a skilled used by many and only perfected by some, and it came to fruition after plenty of practice from its originator, Antonin Panenka.

The Czechoslovakia midfielder attempted the spot kick in the final of Euro 1976 against an all-conquering West Germany side, and Panenka spoke to TalkSport about how the move came to be.

“I got the idea some two years before Euro 1976, I practiced it almost daily.

“Maybe four or five times a week at every training session.

“At the start, it was quite easy for me as nobody knew about this special penalty kick…nobody expected it.

“It was easy to convert penalties with this now famous chip goal called Panenka.”

Panenka then talked about the challenges he faced in perfecting the move and making sure it was fool-proof.

“As time passed, it was more and more difficult for me.

“My psychological task was to get the goalie to think I would shoot the penalty kick in this normal way, not with this chip.

“This was the main task in the later stages of the development of the Panenka penalty kick, it was to make all goalkeepers think the penalty would be converted in the normal way.

“I didn’t see it as a risk as the penalty was really well practiced by me before the tournament in Belgrade in Yugoslavia.

Which Panenka penalty is your favourite? Let us know in the comments below.

“I was really convinced I couldn’t fail with this sort of penalty.

“I was convinced it would be okay to convert the penalty in the final against Germany.”

The move has worked out for many and used for plenty of great occasions.

The likes of Andrea Pirlo, Lionel Messi and Zinedine Zidane have all opted for the Panenka in great moments, and it’s often effective.

Many think of it as disrespectful to the opposition, but Panenka didn’t see it that way.

“I think the majority of people like the penalty, but I did get some criticism when I did use it in the final in 1976.

“Even Sepp Maier, the German goalie, said I ridiculed him.

“It wasn’t my task to make a clown out of him.

“For me, it was the effectiveness of the penalty which really paid off.”

This week marked 45 years since the first Panenka, and it’s a move that has a legacy in football forever.