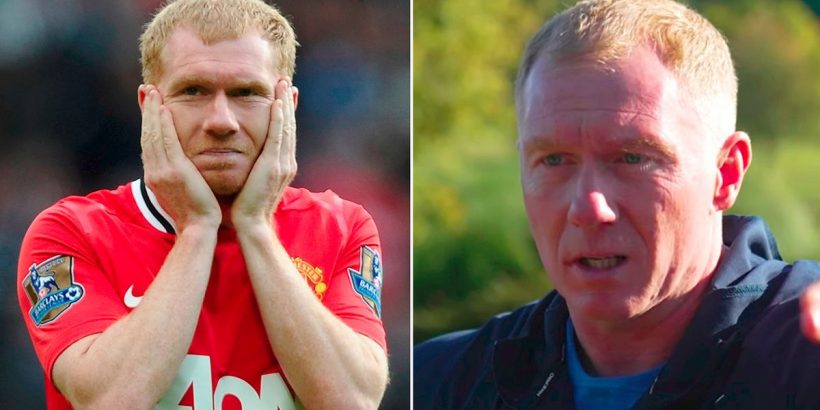 Manchester United legend Paul Scholes has remarkably admitted it always ended in "disaster" when he wasn't paired alongside a defensive midfielder.

Enjoying a glittering career at his boyhood club, Scholes, 47, claimed 11 Premier League titles after breaking into the first-team as part of the Red Devils' now-famed 'Class of '92'. Known for his pin-point passing and fierce long-range wonder strikes, the Salford-born playmaker turned out more than 700 times for Man Utd between 1993 and 2013, hanging up his boots at the end of Sir Alex Ferguson's 27-year reign.

While his deadeye deliveries also aided United to three FA Cups and two Champions League crowns, Scholes has now revealed he always struggled when deployed with Juan Sebastian Veron or Anderson – as they weren't "disciplined".

"It didn’t really matter to me," Scholes told former team-mate Gary Neville on The Overlap, when asked who he preferred partnering with in midfield. "I played with Nicky [Butt], I played with Roy [Keane] – Michael Carrick.

"I loved playing with all of them. It wasn’t great playing with people who [were] attacking people, I needed someone who played that [defensive] position really well."

Neville then jumped in to ask, "Someone like Veron, you mean?"

HAVE YOUR SAY! Is Paul Scholes Man Utd's greatest-ever midfielder? Let us know in the comments section.

Scholes immediately hit back, "Yeah, me and Veron were a disaster. I think me and Anderson did it once. Just, no, it’s not working, is it? Just two lads who don’t care about defending, don’t know the [defensive] position that well.

"You were always moaning about, ‘stay with your runners’ and stuff. [I’d reply] ‘You get them! He’s running to you, you can see them, can’t you?’ I had to play with someone who was disciplined."

Signed by Ferguson for an eye-watering £28.1million in 2001, Veron became the most expensive transfer in English football when he moved from Lazio to Man Utd. However, the Argentine failed to adapt to the considerably higher tempo of the Premier League and was flogged to Chelsea at the end of the 2002/03 campaign.

Anderson was used as a bit-part player by Ferguson, following his £25m arrival in 2007, rotating with Carrick, Scholes, Darren Fletcher and Park Ji-Sung. Despite winning four top-flight honours and the 2008 Champions League, the Brazilian midfielder's lack of ruthlessness limited his first-team chances.