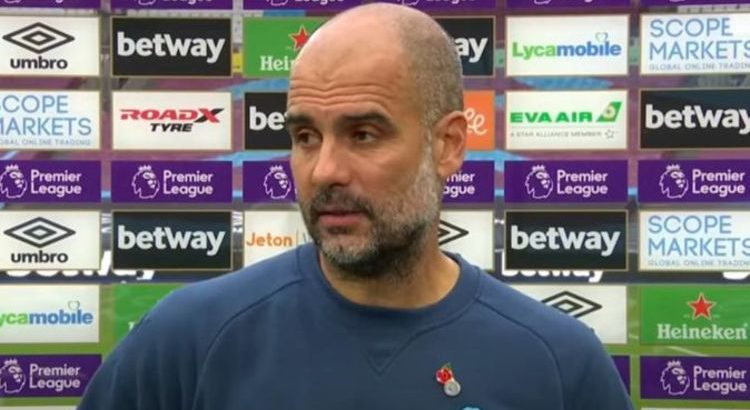 Pep Guardiola has hinted at a tinge of regret over the way that Manchester City and Tottenham handled the Harry Kane transfer saga. It comes after the Premier League champions scraped a victory against Leicester.

Guardiola has alluded to his side’s lack of striking options after the 1-0 win over Leicester at the King Power Stadium.

City are fourth in the Premier League after three wins from four matches, losing their opener to Tottenham back in August when the transfer window was open.

The match was played during the height of the Kane saga, who was absent from the match having refused to return to training that week.

Despite the lack of their main man, Spurs landed a win over the league champions through Heung-min Son but City have bounced back since.

Back-to-back 5-0 wins over Norwich and Arsenal showed that they did not need a striker but a more narrow victory over Leicester had Guardiola reminiscing.

Bernardo Silva scored the only goal of the game to down the Foxes but there were several chances created that would have likely been finished off had they signed Kane in the summer.

But the Portugal international’s strike meant that City have had nine different scorers in three matches with the club looking to share finishing duties.

And the absence of Kane from the side had Guardiola saying: “We don’t have a real striker so we do it as a team.”

With Chelsea, Manchester United and Liverpool all looking in fine fettle and picking up confidence, City have a tough ask defending their crown.

Guardiola’s options give him plenty of firepower, still, with the likes of Jack Grealish, Raheem Sterling, Gabriel Jesus, Riyad Mahrez and Silva to call upon – while Ferran Torres is their top scorer with two.

The Catalan coach added: “It is a difficult place to come and we know that. Leicester make that step forward to be in the top of the league. We did very many good things.

“We did really well, the process we found and we let them run a lot. The players were able to be focused and to concentrate.

“Kasper Schmeichel is a really top keeper so it sometimes happens. The good thing is the amount of chances we create. This is a good thing. Of course, we would have loved to score more goals. We deserve it.