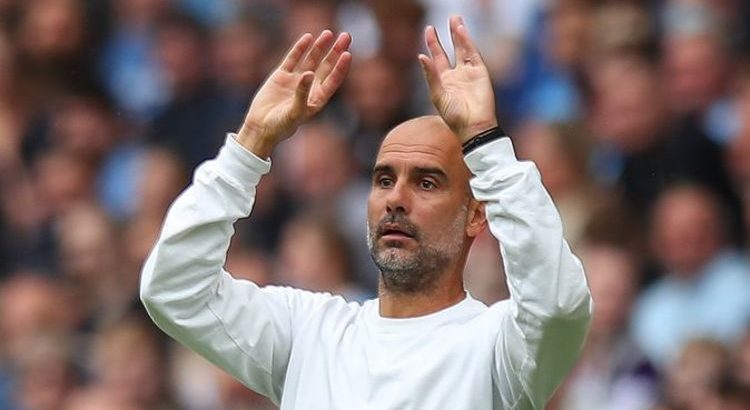 Pep Guardiola is confident he has the firepower to follow up Manchester City’s runaway Premier League title even without Harry Kane. Last season’s Champions accepted defeat in their bid to land the England captain despite Kane being desperate to join Guardiola’s side. Yet in £100million signing Jack Grealish, academy striker Liam Delap, Gabriel Jesus, Raheem Sterling, Kevin De Bruyne and Ferran Torres, the City boss believes they will not go short of goals.

The gulf between what City were prepared to pay and the valuation placed on Kane by hardball chairman Daniel Levy proved unbridgeable.

City offered a package worth £100million with just £75m guaranteed back in June Levy wanted a total package of £150m.

In the end neither club were prepared to budge despite City offering a possible player swap as makeweight in a deal.

It leaves City facing the season – as a source at the club pointed out yesterday – with the same squad plus record transfer Grealish which came within a one goal in the Champions League Final of posting one of the best season’s by a Premier League club.

And there is confidence that with the arrival on to the first team fringes of highly rated youngsters like Cole Palmer and Delap and the return to fitness of Phil Foden.

Guardiola made no secret of the fact he believed Kane could be the final piece of the jigsaw after a season when hardly had access to Sergio Aguero.

The City boss broke cover earlier this month admitting they still wanted to bring Kane to the Etihad if a price could have been agreed.

And a new striker will remain high on the list of priorities next summer.

Levy holding all the aces in one hand and three-years of a six year contract tying Kane to north London in the other.

Yesterday marked a line being drawn by both clubs and the player at the end of this summer’s protracted transfer saga.

City are more than happy to go into battle without further additions but the intriguing prospect of Cristiano Ronaldo making a surprise move has been floated.

Despite influential agent Jorge Mendes keen to make the deal happen he has never figured in transfer planning and it remains highly unlikely that the former United man, who has a year left on his current deal at Juventus, will arrive in the next six days.

Guardiola has faith that Delap could blossom given the opportunity after a stellar season in the Elite Development Squad last year when he scored 24 in 20 games.

He was touted earlier this summer as a possible loanee with several Championship clubs interested but will be given the chance to shine under Guardiola.

It will be a big season for the 18-year-old particularly with the shadow of Erling Haaland looming given his that next summer sees the triggering of a £67m release clause in his Borussia Dortmund contract.

With Chelsea having opted for Romelu Lukaku, City could face a three-way battle with Bayern Munich and Manchester United for his signature.