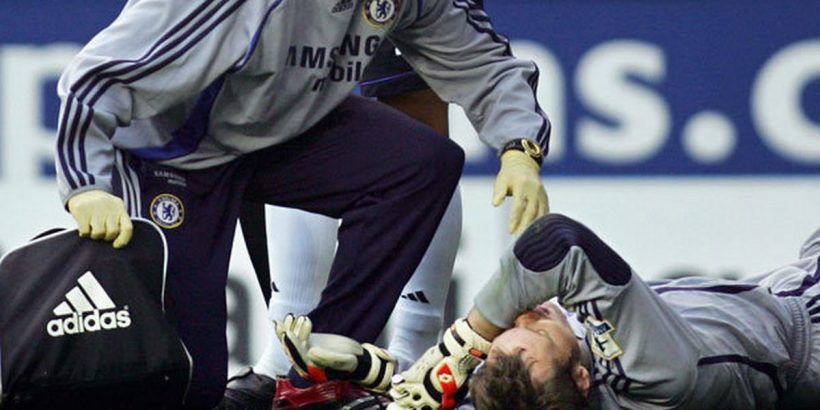 Former Chelsea goalkeeper Petr Cech has revealed he can't remember anything from the day he suffered his horrendous head injury.

Cech was left with a depressed skull fracture after a collision in the first minute of a Premier League match away at Reading in October 2006.

He was rushed to hospital to have emergency surgery which included having two metal plates fitted in his skull, a procedure which ultimately saved his life.

The former Czech Republic captain returned to action a matter of months later and thought he could recall the events leading up to the injury – that was, until he returned to Reading the next season.

In a column on Chelsea's official website to mark the 15th anniversary of the incident, Cech said: "I had played for Czech Republic against Ireland in Dublin a few days before. We drew 1-1. I flew directly to London.

"I was quite tired after the international break, so the night before the game at Reading I had a massage, which I didn’t often have, to help get rid of the fatigue a little bit faster.

"Then I went to my hotel room, and that is the last thing I remember.

Where does Petr Cech rank amongst the Premier League's best ever goalies? Let us know in the comments section.

"I had thought I remembered going to the stadium and the dressing room, and doing the warm-up.

"But in August 2007, when we came to Reading to play them, I realised it was a coincidence of a different stadium.

"I thought the indoor area looked a certain way, but when we got there and I was walking to the dressing room, it was not what I thought I remembered. Probably that flashback was a completely different stadium!"

Cech adopted his now iconic helmet which allowed him to continue his football career despite the skull fracture.

He is now in a backroom role at Stamford Bridge as the Blues' technical and performance advisor, a position he has held since 2019.

And he also plays as a goaltender for ice hockey side Guildford Phoenix, whom he re-signed for last month for the 2021/22 season.