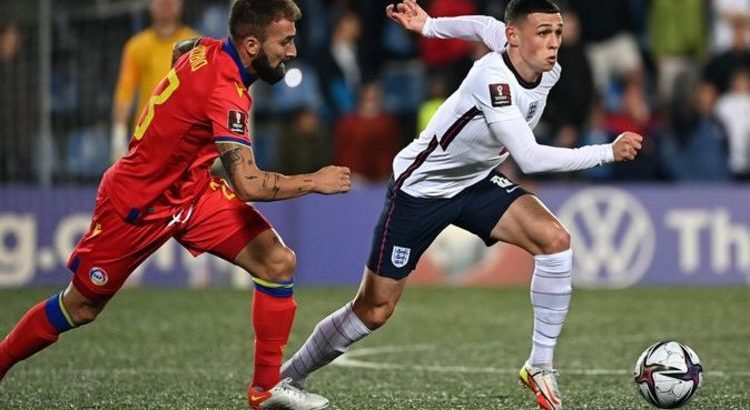 Euro 2020: Foden shows off party tricks ahead of Germany clash

Phil Foden has compared to Paul Gascoigne following his phenomenal performance in England’s World Cup qualifying win over Andorra. But the Manchester City star has given Gareth Southgate a selection dilemma as the Three Lions boss builds towards the 2022 World Cup in Qatar.

Foden was the standout performer in the win over Andorra, picking out team-mates with sublime passing and creating Bukayo Saka’s goal which doubled England’s lead.

The 21-year-old was deployed in a deeper midfield role than he normally plays for City, having also excelled on the left wing in his side’s 2-2 draw away to Liverpool the previous weekend.

His man-of-the-match display against Andorra saw him compared by Chris Sutton to ‘Gazza’ – who at Foden’s age was two years away from taking the Italia ’90 World Cup by storm.

Sutton also called for Foden to be played in a central role by Southgate, which could gives the England manager a headache ahead of next year’s tournament in the Middle East.

“I remember watching a youth-team player called Paul Gascoigne at Carrow Road,” the former Norwich, Chelsea and Celtic striker wrote in his column for the Daily Mail.

“It was a messy game but he was three seconds ahead of the rest. He made it look like he was playing in his back garden. It was all on his terms.

“Foden invited any and all comparisons to Gazza when he bleached his hair blond in the summer and he isn’t so dissimilar in football terms.”

But Sutton said boyhood City fan Foden must be seen more in a central midfield role before he can truly be called “the Stockport Gazza”.

“In the centre of the park is where he can act as chief string-puller and that’s where Foden has said he enjoys playing the most,” he said.

“Foden could stake a claim to start in central midfield in the future. That’s an experiment I’d like to see.”

That could require Southgate to tweak his preferred formation, with the England boss usually employing a 4-2-3-1 set-up.

Declan Rice and Kalvin Phillips were his holding midfielders at Euro 2020, with both players starting every game during the tournament finals.

Sutton points out that England “lacked creativity from that area against certain opponents”, but the midfield pair were crucial in helping Southgate’s side control games, with the Three Lions not conceding a goal until the semi-final stage.

Foden started England’s first two matches at Euro 2020 before being rested in the final group game against the Czech Republic, which saw him drop out of the side as Southgate hit on a successful formula.

He missed the final through an injury which kept him out of action until last month – but has now marked his return in style with two fine performances for club and country.

Southgate now faces an issue over whether to stick with Rice and Phillips as his holding midfield partnership – with the likes of Foden, Mason Mount, Jack Grealish, Bukayo Saka, Jadon Sancho and Raheem Sterling competing for places in front of them.

But luckily for the England boss, he should have the perfect opportunity to experiment – with games against Albania and San Marino wrapping up the qualification campaign next month following Tuesday’s visit of Hungary.