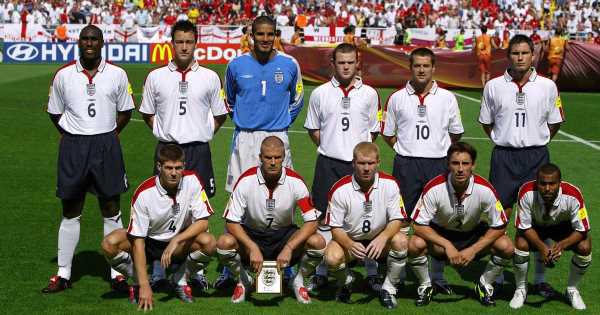 It had to happen. Everton have sacked Frank Lampard, the latest member of England's so-called 'Golden Generation' to be given the boot as a manager.

A growing number of that talented but trophyless Three Lions squad of the early 2000s have found the transition from the pitch to the dugout tough, with Lampard given the heave-ho with the Toffees joint bottom of the Premier League. Lampard can commiserate with ex-midfield partner Steven Gerrard in after the Liverpool legend was turfed out of the Aston Villa job earlier this season.

This is the second time Lampard has been given his marching orders as a manager, with Chelsea dumping their legendary midfielder in January 2021 – and that worked out well for the Blues as Thomas Tuchel led them to Champions League glory. While Everton have bigger problems than just Lampard's tactics, it's another meek exit for the midfield icon – but where does he rank among the Golden Generation's worst managers?

READ MORE: England's golden generation and how they have fared as managers

Gary Neville had a disastrous three-month spell at Valencia which included a 7-0 drubbing at Barcelona, sending the former Manchester United captain scampering back to punditry duties. Gary's brother Phil led England Women to the 2019 World Cup semi-finals and stepped down in 2021 with a sense of job unfinished; a job Sarina Wiegman completed and then some at the Euros last summer. Neville Jr has also struggled in charge of Inter Miami, losing more games than he's won.

Wayne Rooney did as good a job at Derby as could be expected under the financial circumstances, but the Rams were still relegated in 2022 – and the Man United icon won just two of his first 14 games as DC United boss to finish bottom of the MLS Eastern Conference last term. Paul Scholes has also had a crack at management, but lasted just seven games at his beloved Oldham – winning once – and then five as a caretaker at Salford City.

Do you think now was the right time for Frank Lampard to go? Let us know in the comments section.

Meanwhile, Scott Parker may have won two promotions from the Championship, but he failed to impress with both Fulham and Bournemouth in the Premier League, leaving both jobs under a cloud. He's now at Club Bruges in Belgium and could probably make the case for being the most successful Golden Generation manager on trophies alone, even if he has underachieved at the highest level.

There's also Sol Campbell, who was derided when he labelled himself 'one of the greatest minds in football' as he put out a come-and-get-me plea for managerial work. Macclesfield eventually snapped him up and, to be fair to the former centre-back, he did an impressive job in trying circumstances at the cash-strapped club – yet he failed to replicate that in similar circumstances at Southend United, in what was his last managerial job to date.

So, who is your No1 pick for last place? Once you have voted in our poll above, join the debate in the comments section below.