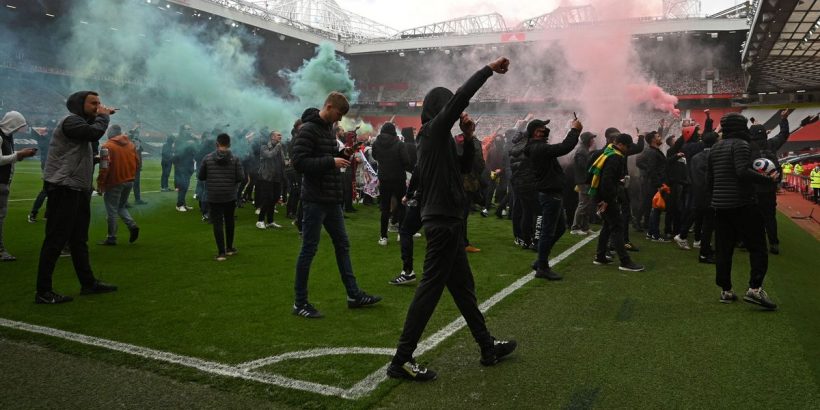 The Premier League have demanded answers from Manchester United and all other parties involved in having to call off Sunday's game with Liverpool.

The high-profile fixture had to be postponed when a protest from fuming United fans was allowed to spiral out of control.

Thousands of supporters clashed with police, leaving one officer hospitalised after being attacked with a broken bottle.

Hundreds more smashed through barriers and gates to get onto the pitch to swing on the crossbars, pinch corner flags, throw flares, damage TV cameras and infiltrate corridors to leave the Covid-19 red zone contaminated.

It left the Premier League no choice but to cancel the game, before launching an immediate investigation into how the carnage was allowed to happen.

League bosses have contacted United, Greater Manchester Police, the chief safety officer and match co-ordinators to ask for their observations.

League chief executive Richard Masters wants to know how English football's biggest game could fall victim to what had supposed to be a peaceful demonstration.

The Football Association will also liaise with the Premier League as part in the investigation, which could lead to United being sanctioned with a points deduction and huge fine.

A Premier League source said: "It's too early to discuss possible punishments because the first thing we need to establish is how this was allowed to happen. All those involved have been contacted and asked to provide their observations."

Meanwhile talks are continuing between the Premier League, both clubs and broadcasters about when the re-arranged game can be squeezed into the remaining calendar for this season, with a new date still to be found.