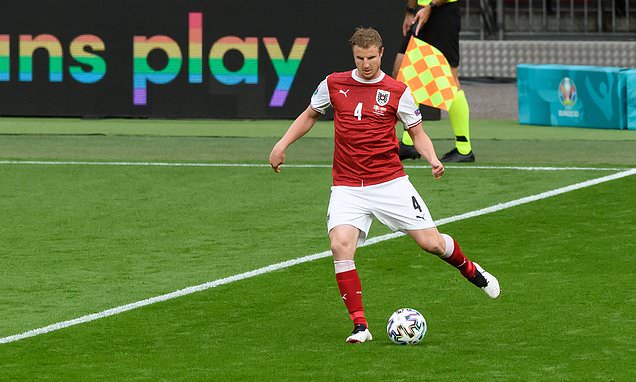 PLAYER RATINGS: Martin Hinteregger impresses despite defeat for Austria against Italy in Euro 2020 last-16 tie while Federico Chiesa caught the eye for Roberto Mancini’s side but Lorenzo Insigne wasn’t at his best

Italy survived a scare to beat Austria 2-1 in extra-time and make it through to the quarter-finals of Euro 2020.

Extra-time goals from Federico Chiesa and Matteo Pessina gave Italy a two-goal lead, with Sasa Kalajdzic getting a goal back for Austria late on.

Sportsmail’s Tom Collomosse assesses the best and worst performers from the clash at Wembley. 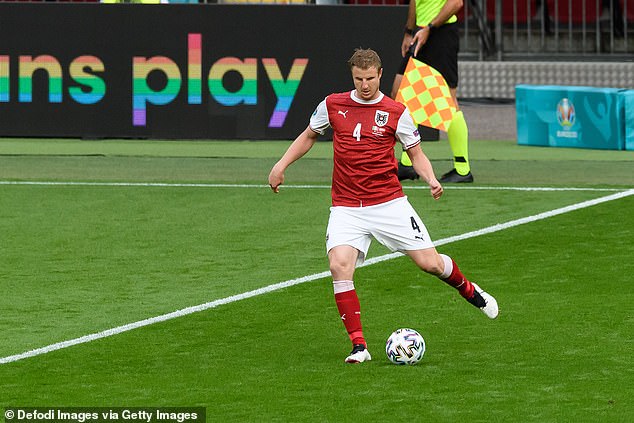 The giant goalkeeper is an intimidating presence between the posts and made a confident claim from Schlager’s dangerous first-half cross. 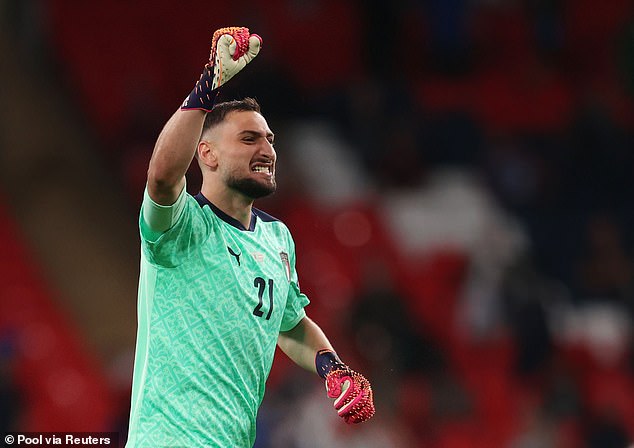 Spinazzola’s desire to attack constantly means Di Lorenzo has to be careful on the opposite flank. Might have done better with a header from Verratti’s first-half corner.

Captain in the absence of Giorgio Chiellini, the Juventus defender is always composed on the ball but had to be wary of Arnautovic’s runs beyond Italy’s high line.

The tall Lazio centre-back was brought in for the injured Chiellini and was a force to be reckoned with in the air in both penalty areas.

A constant threat from left-back as he has been throughout the tournament. Tried to link with Verratti and Insigne and gave Lainer a busy night on the Austrian right. 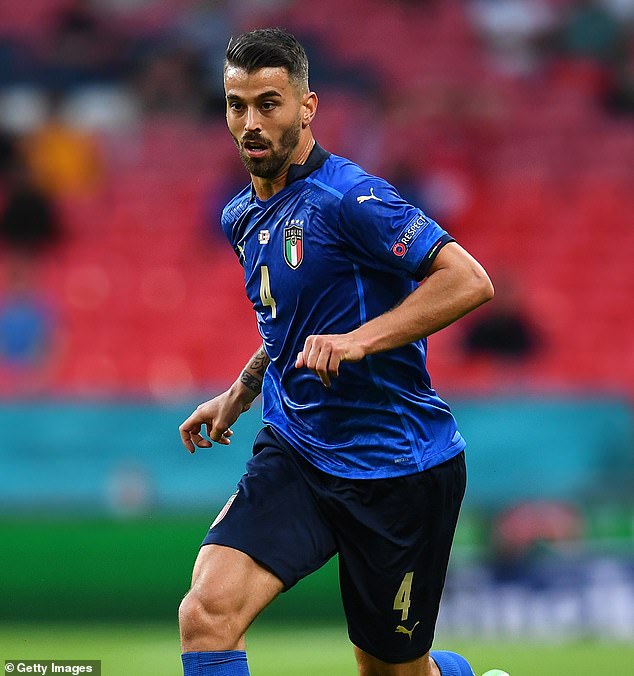 Leonardo Spinazzola, who has been a threat throughout the tournament, impressed again

Found his passing range early on and played two promising passes into Immobile which the striker should have done better with, but faded over time and was subbed.

Italy rely on the Chelsea midfielder to keep them ticking over in the centre of the park and he was always looking for one- and two-touch passes to dictate the pace of the game.

Preferred in midfield to Manuel Locatelli, the Paris Saint Germain star was typically tenacious and tried to help Jorginho establish control of the match in the centre of the pitch.

Cut inside twice off the left in good shooting positions only to delay his strike and allow the Austrian defence to make simple blocks.

Hit the post with a fine strike from 25 yards just after the half-hour mark but could have had more chances with better touch and awareness.

One of the stars of Italy’s win over Turkey but the Napoli winger should have done better with a crossing chance here that would have given Berardi a tap-in. 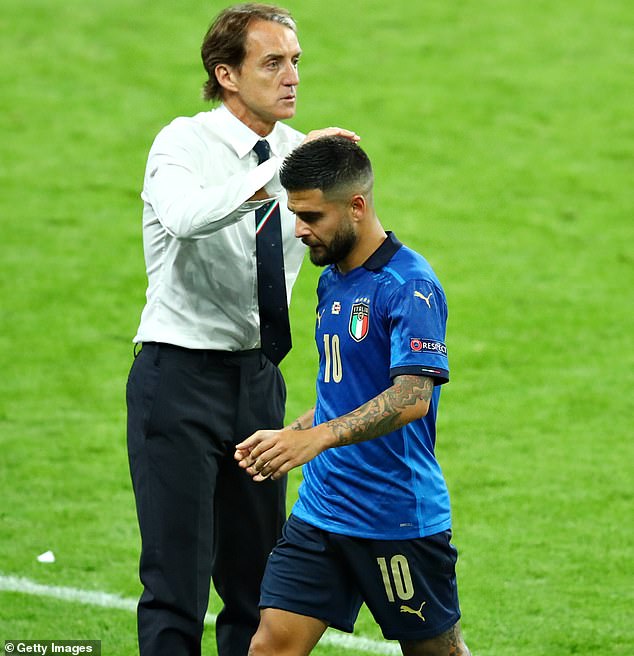 MANAGER ROBERTO MANCINI 7 Became increasingly agitated on the touchline as Austria absorbed Italy’s early dominance and then started to create chances of their own. Got the big call to start Verratti over Locatelli wrong but then nailed his substitutions

Furious at a late challenge from Immobile early on, the Watford man recovered his composure to make an important save from Barella during an early period of Italian dominance.

Facing the marauding Spinazzola is a difficult job for any full-back and though he struggled on a couple of occasions, Lainer stuck to his task diligently.

Needed to show composure and discipline at the heart of the back four when Italy had the ball and showed a healthy appetite for the task.

Lucky to avoid a booking for a late challenge on Barella in the first half but he handled Immobile well and used the ball cleverly when he had the chance.

Playing at left-back, the former Bayern man went close with a free-kick from the edge of the box and grew as an attacking force in the second half. 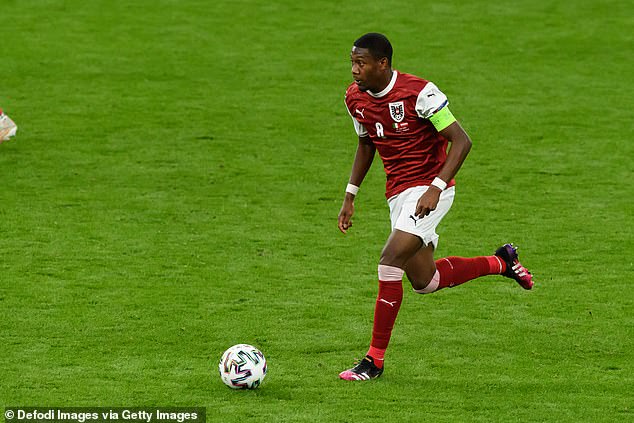 David Alaba, who was deployed at left-back, grew as an attacking force in the second half

Cut out a number of Italian moves in midfield thanks to astute positioning and when he had possession himself, he generally used it wisely.

A good foil in the middle for Schlager, he kept it simple and was mostly not tempted into straying away from his post when Italy tried to string passes together.

Spent a good deal of time lending a hand to Lainer as Austria tried to disrupt the Insigne-Immobile partnership on the Italian left, mainly before the break.

The RB Leipzig star showed good energy in the No10 role and went close with a deflected strike that had Donnarumma scrambling across his goal. 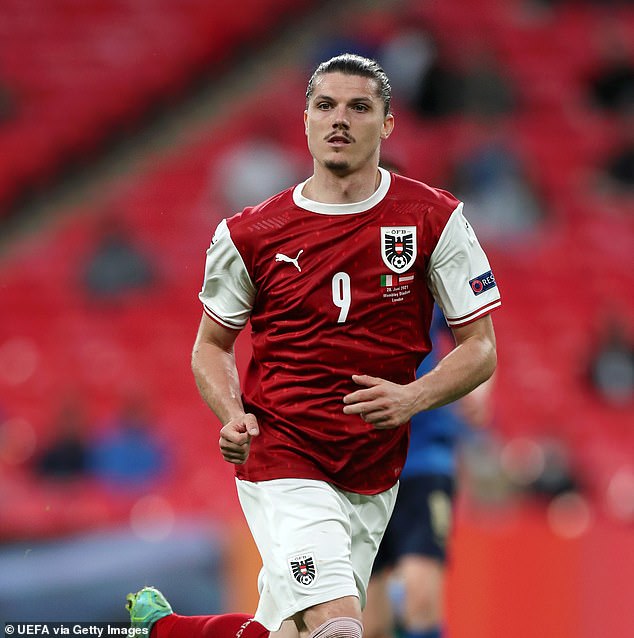 Made a dangerous burst down the left in the early stages of the game and produced a cross that could easily have resulted in the opening goal.

Booked in the first two minutes for a foul on Barella but was always a worry for the Italian defence and only a marginal VAR offside call ruled out his second-half header. 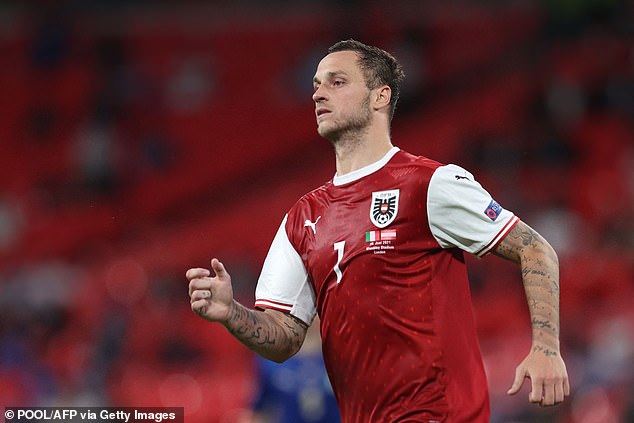 MANAGER FRANCO FODA 8 Excellent gameplan designed to press Italy in specific areas and use the danger of Arnautovic on the break and they were the better side for most of the second half. 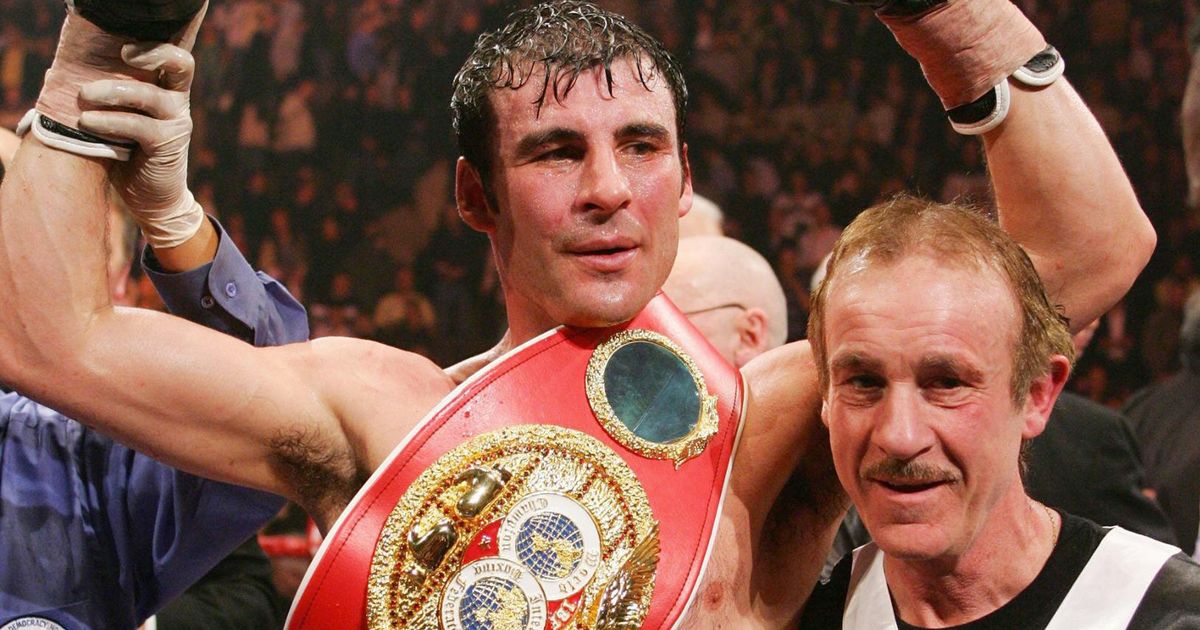