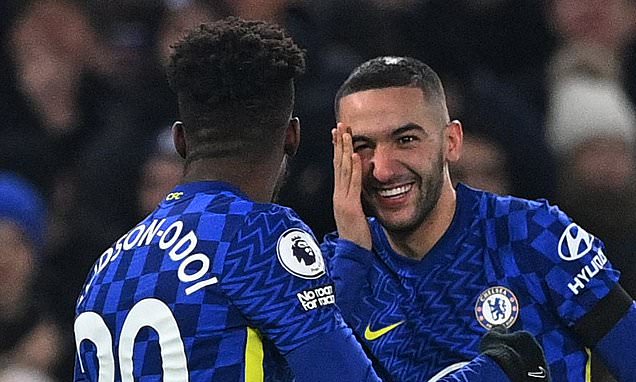 PLAYER RATINGS: Hakim Ziyech capped impressive display with sublime strike – and even celebrated… but Japhet Tanganga was given a torrid time by Hudson-Odoi before being hooked

Chelsea kept alive their remote Premier League title chances with a 2-0 win over London rivals Tottenham Hotspur on Sunday, set on their way by an exquisite strike from Hakim Ziyech which was quickly followed up by a Thiago Silva header.

Ziyech broke the deadlock in the 47th minute when he received the ball on edge of the box after Callum Hudson-Odoi surged forward and the Moroccan curled his shot into the top corner with Spurs goalkeeper Hugo Lloris rooted to the spot.

Thomas Tuchel’s men sealed their first league win of 2022 eight minutes later when Silva, despite being sandwiched between two Spurs defenders, headed home a free kick floated into the box by Mason Mount. 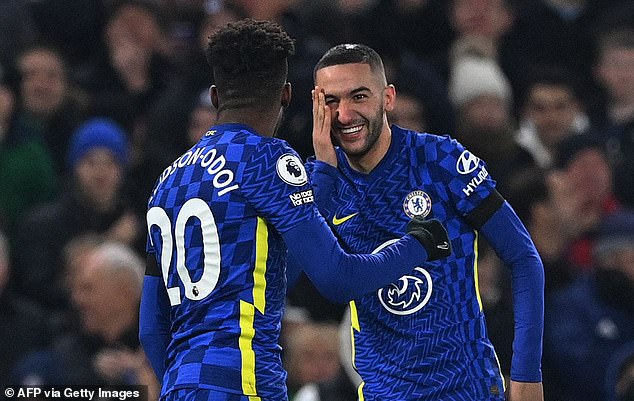 Kepa Arrizabalaga – Had very little to do until the dying minutes when he produced an excellent stop to deny Kane’s bullet header. 7

Cesar Azpilicueta – But for a short lapse that let in Sessegnon, the Blues skipper was effective in attack and defence. 7

Antonio Rudiger – Looked to enjoy his tussle with Kane and rose to the challenge. Chelsea need him signed up – and quick. 8

Thiago Silva – Got away with one when outmuscled for Kane’s disallowed goal. Rubbed salt into Spurs’ wounds with Chelsea’s second. 7.5

Malang Sarr – Regained his composure after a brutal challenge on his ankle by Doherty to produce a solid display. 6.5 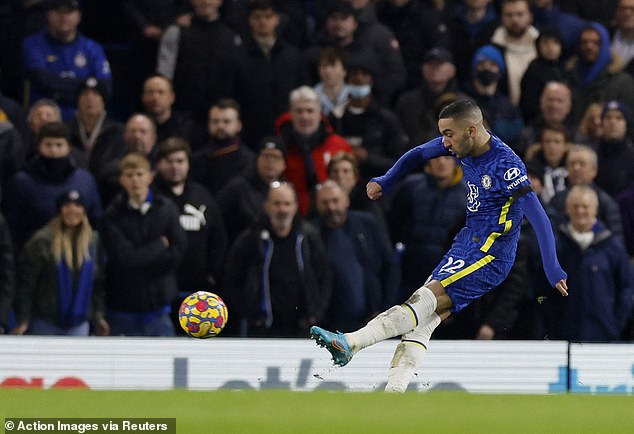 Jorginho – Kept things ticking over in the centre of the park with effortless ease as Chelsea controlled the crucial midfield area. 6.5

Mateo Kovacic – Drove his team forward from deep. Unspectacular in midfield but so effective. A vital player for Chelsea. 7

Mason Mount – Fantastic with the ball at his feet in tight situations. Intelligent in possession with the work rate to boot. 7.5

Hakim Ziyech – Followed up his goal against Brighton with a beauty here to break the deadlock. And he even celebrated this time! 8.5

Callum Hudson-Odoi – Super run to set up Ziyech’s goal and caused Tanganga all worlds of problems down Chelsea’s left. 8

Romelu Lukaku – Simply not at the races at moment. Wasted some decent opportunities, too. Hasn’t scored in the league since December. 6.5 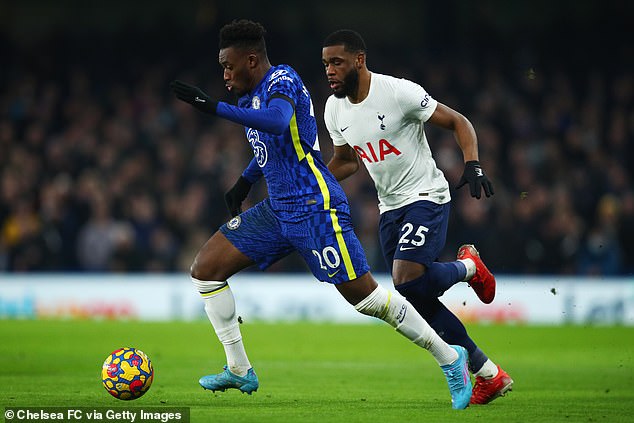 Thomas Tuchel – Loves playing Tottenham. Will hope this is the big win that will put Chelsea on the road to recovery. 7.5

Hugo Lloris – Fresh from signing a new contract, the Spurs keeper stood motionless as Ziyech’s brilliant opener flew past him. 6

Japhet Tanganga – Given a torrid time by Hudson-Odoi and was put out of his misery early in the second half when he was hooked. 5.5

Davinson Sanchez – Crucially failed to shackle Silva in the lead up to the Brazilian’s brilliant header to double Chelsea’s lead. 6

Ben Davies – Could only watch Ziyech’s super strike from the side he was supposed to be governing. Solid enough but Conte will want an upgrade. 6 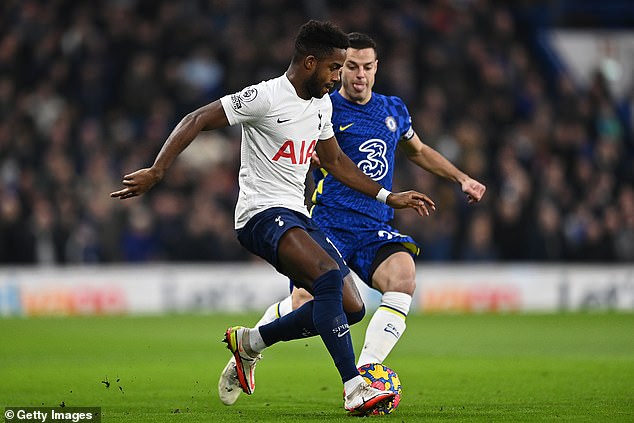 Matt Doherty – A surprise starter in an unfamiliar right midfield role as Conte came to defend. No lack of effort but offered little else. 6

Harry Winks – Appears to be firmly back in Conte’s plans. Competed well in midfield but couldn’t stop the dominant Blues. 6.5

Pierre-Emile Hojbjerg – Ran his socks off but was wasteful in possession on occasion. Will remain an important cog for Conte between now and the summer. 6

Ryan Sessegnon – Conte appears to rate the left-footer and he was given another opportunity to impress. He didn’t take it, but look to have a future under the Italian. 5.5

Harry Kane – Furious his goal was disallowed – and had good reason to be. A thoroughly unenjoyable day’s work for the England captain. 6.5

Steven Bergwijn – A good outlet for Tottenham in the first-half without providing a goal threat. Worked hard on a frustrating 90 minutes for the Dutchman. 6.5

Antonio Conte: Will turn his attentions to the transfer market this week following a disappointing return to Chelsea. Tottenham must back him. 6