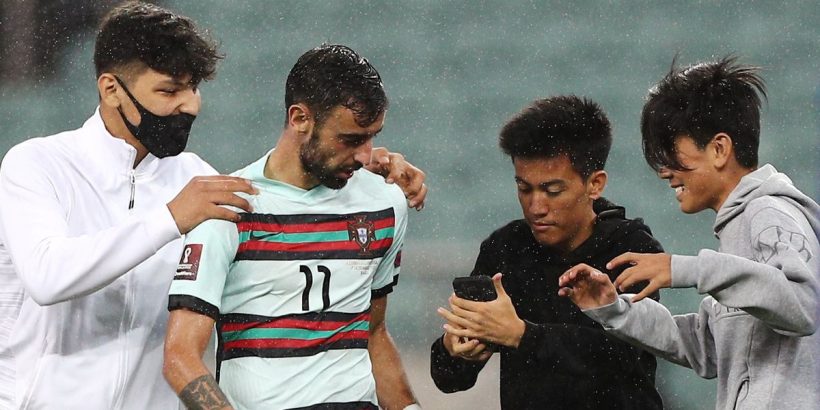 A group of Portugal fans managed to evade security to grab a selfie with Manchester United star Bruno Fernandes – all in the middle of a game.

The Euro 2016 winners were playing a World Cup qualifier against Azerbaijan in Baku when the trio got onto the pitch.

With Portugal winning the game 3-0 and four minutes of normal time left on the clock, they went straight up to midfielder Fernandes.

And United's No.18 was happy to pose with the ground, even waiting for a fourth to arrive who slipped on his way.

The trio then managed to run off the pitch without any security officers at the 68,700-seater stadium appearing to stop them.

Fernandes played the full 90 minutes for Portugal during their World Cup qualifier.

And he played a big role in the 3-0 win, grabbing an assist for Manchester City rival Bernardo Silva to open the scoring 26 minutes in.

Liverpool's Diogo Jota then found Andre Silva to double the lead before half time before the forward got a goal himself with 15 minutes to go.

Do you think Bruno Fernandes and Cristiano Ronaldo will work well together at Manchester United? Let us know in the comments section.

The win puts Portugal top of their qualifying group, having won four and drawn one of their games at the half-way stage.

And Fernandes will now travel back to Old Trafford, having scored three goals in three games so far.

But he is not the only Portuguese star at United now, with Cristiano Ronaldo returning to the club after 12 years.

He was snapped talking to Ole Gunnar Solskjaer during his first day back at Carrington.

While the five-time Ballon d'Or winner took his first training session, expected to join Fernandes on the pitch against Newcastle on Saturday.

The United midfielder is not the only one to have a selfie with fans during the international break as the Netherland's Memphis Depay was collared by a teenager – who has been banned from stadiums for five years because of it.